PHILADELPHIA — Say what you will about Philadelphia fans, but they love to embrace the underdog. Whether it be fictional Rocky Balboa or this year’s Super Bowl bound Eagles led by back-up quarterback, Nick Foles. Tonight, in the Wells Fargo Center, you can add NXT’s Johnny Gargano to that group. 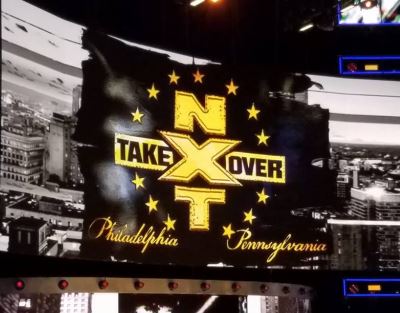 The crowd was hot all night, but they also had some “smarky” moments. Take for example, chanting “Sweeeeet!” after a two count. Get it? Two sweeeet! And it happened in the NXT title match early on, but as Gargano fought Andrade “Cien” Almas those chants dissipated. The fans were just cheering every time Johnny Wrestling kicked out of pin. This lead to one of the loudest pops of the night. The crowd also went wild when his wife, Candice LaRea, leapt the security barrier to take out Zelina Vega. 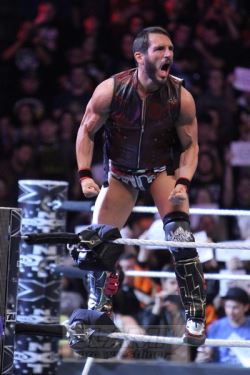 Even though ***SPOILER ALERT*** Gargano didn’t come out on top and capture the title. The Philadelphia crowd showed their gratitude to Gargano for putting everything he had on the line. Unfortunately, that moment was ruined by his former partner, Tommasa Ciampa, who attack Gargano from behind. The venom being spit by the crowd probably gave Ciampa second thoughts about walking out of the arena alone tonight.

As much as Philadelphia loves and underdog, they are also a big fan of violent wrestling matches, after all this was the home of the original ECW. 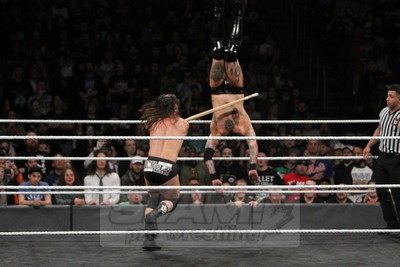 An upside down Aleister Black receives a cane shot from Adam Cole.

Aleister Black and Adam Cole brought the pain in their Extreme Rules match. The crowd ate it up. The spot that brought the crowd to its feet and started that chant, you know “Holy bleep!”, was when Black set two chairs up back to back and dropped Cole onto them back first. Killian Dane also elicited that reaction after a suicide dive to take out Kyle O’Reilly and Bobby Fish as they fought with the rest of Sanity at ringside.

Speaking of Sanity, the crowd popped hard for Nikki Cross when she kicked off the NXT taping with a match versus Lacey Evans. Maybe it was because Cross was the first superstar to come out, but it’s probably because she is massively over. ***Spoiler Alert*** Nikki won. 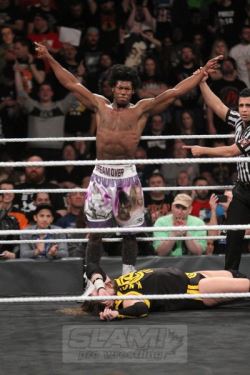 The Philadelphia crowd may have also facilitated a face turn tonight. Velveteen Dream guaranteed to knockout the knockout artist Kassius Ohno in thirty seconds. The crowd kept him to his word, counting the seconds as the match a started. A big right knocked Ohno to the mat and the crowd loved it, but unfortunately for Dream it wasn’t a KO shot. Even though Ohno was the face in the match, the crowd starting cheering for Dream. And those cheers were rewarded when Dream won the match.

In the end, the underdog didn’t win, but the crowd left happy after watching what could very well be the match of the year, not just in NXT, but all of professional wrestling.