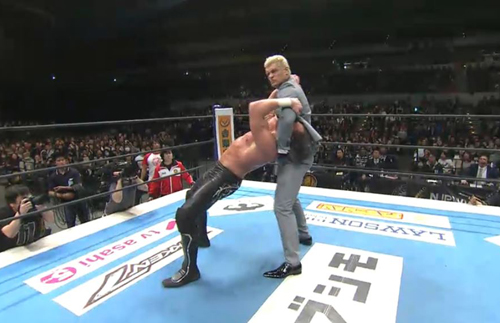 It was a very bad night for Bullet Club at the second day of New Beginning in Sapporo.

Not only did Kenny Omega lose the IWGP United States Heavyweight Championship to challenger ‘Switchblade’ Jay White and The Young Bucks lose the IWGP Junior Heavyweight Tag Team belts to Roppongi 3K but the Bullet Club itself has fractured.

In the conclusion of a brutal match which featured Omega powerbombing White into the first row, Jay ‘Switchblade’ White reversed a One-Winged Angel into his Blade Runner to win the IWGP United States Heavyweight Championship.

As an exhausted White celebrated, Hangman Page came into the ring pulling the belt away from White, obviously making his intentions known that he wishes to challenge him for the title. Omega stepped in, grabbing the belt from Page and handing it back to White.

That brought Cody Rhodes into the ring.

“This isn’t about you! Hangman is my best friend and this is his moment!” yelled Rhodes at Omega.

Marty Scurll entered the fray trying to calm everyone down.

“You are not acting like a leader. What is your deal?” Rhodes asked Omega as they two began shoving each other. In the heat of the moment, Omega shoved an injured Matt Jackson to the mat.

“What was that, man?” asked Nick Jackson holding his fallen brother. Nick led Matt to the back as Omega apologized from inside the ring.

“Come back, I am sorry,” pleaded Omega.

“You two sort this out,” Scurll said to Omega and Rhodes as he headed to the back.

Omega shook hands with Page who also turned to leave.

“Are we okay? I am sorry you lost,” said Rhodes to Omega. The two superstars shook hands.

As Rhodes held the ropes open for Omega, he attacked him with a Cross Rhodes.

Page and Scurll came running back to the ring as Rhodes snatched a steel chair from announcer Kevin Kelly.

“He took your moment! Hold him up!” Rhodes shouted to Hangman as they readied to crown Omega. Scurll stood in disbelief at what was happening before him.

Kota Ibushi, Omega’s former tag team partner as the Golden Lovers, ran into the ring chasing off everyone and therefore returning the save Omega made for him at New Year Dash.

In his second of seven trial matches against main roster stars, Kitamura gives Robinson a run for his money. He almost puts away Robinson with a vicious spear. Robinson throws a knee to escape the Jack Hammer, taking down Kitamura with a running knee and a clothesline. Pulp Friction ends Kitamura’s night. Robinson politely pushes a Young Lion out of the way so he can help Kitamura out of the ring and congratulate him on a job well done.

Liger argues with Taichi’s valet Miho Abe. She slapped him on Night One. Miho whispers something in Taguchi’s ear. Taguchi claps Taichi on the shoulder before tackling Miho to the ground to protect her? What the…? Taichi throws a fit. Don Callis says if you were in Canada and did that, you would be locked up. Miho slaps Taguchi in the face. Standard massive tag match which Taichi with a thrust kick to Umino. After the match, Suzuki-gun rips off Tiger Mask’s mask. Young Lions comes to the rescue draping a towel over his face. Miho parades around the ring wearing the mask. She then stomps Taguchi’s “sensitive region”.

Bullet Club (Yujiro Takahashi and Hikuleo) Vs Chaos (Tomohiro Ishii and Toru Yano)
Leo Tonga has changed his name to the one his father gave him: Hikuleo. Yano throws water at Hikuleo during the introductions. Don Callis is stunned to hear from Kevin Kelly about Yano’s educational background. Callis: Yano went to college? I want to see the college that accepted Yano. Please, take me there. Yujiro hits Yano with him pimp stick outside the ring. Ishii suplexes Hikuleo. Wow. Yujiro and Ishii exchange bites in the middle of the ring. Yano rips off a turnbuckle but Hikuleo boots him right in the face before he can use it. Yano punches Hikuleo in the crotch and Ishii clotheslines him for the win. Short match and a letdown especially when Hikuleo and Ishii could have had a great showdown.

The rest of Suzuki-gun (except for Killer Elite Squad) is at ringside. Toa Henare is replacing Hiroshi Tanahashi. Minoru beats Henare with a ringside barrier and some steel chairs. Iizuka does the same to Elgin. Henare gets thrown to the outside and all the Suzuki-gun members swarm him. Henare and Elgin double team Suzuki. Henare almost scores a pinfall over Suzuki. Henare taps out to the same leg lock that Suzuki injured Tanahashi with last night. Iizuka drags Elgin away from the ring as Suzuki-gun beats Henare down. Togi Makabe and his steel chain make the save. He stares down Suzuki. Suzuki leaves the ring immediately. Makabe taunts Suzuki and gives him the finger.

Cody tells the announcers that the Bullet Club is winning all weekend long. Cody attempts to drop Ibushi on the ring apron with Cross Rhodes as he did at Wrestle Kingdom. He is stopped by Kushida. As Kushida holds Page down, Ibushi hits him from the top rope with first a double stomp. Cody saves Page from the Hoverboard Lock. Cody crushes Kushida with Cross Rhodes. One Rite of Passage from Page then spells doom for Kushida. Cody and Ibushi argue after the match.

Chaos attacks LIJ before the bell rings. Yoshi-Hashi rips off Naito’s new t-shirt and stomps on it. Yoshi-Hashi loses it, pounding and pounding on Naito in a corner. An official tries to stop him but cannot. Match breaks down. Naito wraps the shirt around Yoshi-Hashi’s neck while Takahashi takes Ospreay into the crowd. Evil and Goto trade chops in an aisle. Sanada and Bushi double team Okada. Sanada and Okada square-off. A Codebreaker from Bushi, a TKO and Skull End from Sanada forces Gedo to tap out.

Roppongi 3K mocks the poses of The Young Bucks. The Young Bucks go after Rocky Romero. They chase him down the entranceway into the backstage area. Yoh and Sho save him from being double powerbombed. Nick holds onto Yoh and Sho as Matt runs, dives off the ramp onto them. The Bucks give Yoh an apron bomb. Matt’s back seems to have seized up when he tries to powerbomb Yoh and he can barely stand in the ring. Matt tries to walk things off outside the ring. Matt tags back in and takes things slow. Matt is backdropped over the ropes hitting his back on the ring apron on the way down. He gets up with a massive scrape or cut on his side. Nick gets a 3K on the ring apron. Matt kicks out of a double Superplex from the top rope. Red Shows continues to allow Roppongi 3K to double team Matt forever on end. Nick tags in fighting off both Sho and Yoh. Sho is suplexed on the apron. Nick DDTs Sho in the ring, flips over the ropes and DDTs Yoh on the floor. Craaazy. Matt holds Sho half off on and half off the apron. Nick moonsaults Sho from the top rope. They do the same thing to Yoh but inside the ring but with a 450 Splash. Matt has to give up on a Boston Crab as his back hurts too much. Matt is rolled up for the pin. Matt is helped to the back by some Young Lions.