Mat Matters: The Christmas gift that proved my wife has accepted my wrestling obsession

Those of you who have been reading my series of Mat Matters columns already know that wrestling and writing about wrestling has been cathartic for my soul. In a previous column I talked about my wonderful wife wanting to go antiquing on our wedding anniversary only to have it become all about a great wrestling memorabilia find. 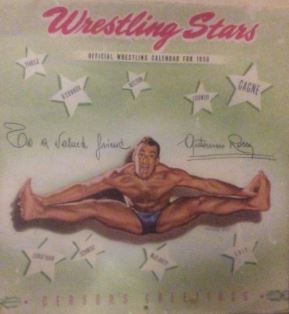 When I met my future wife, Danielle, she had no idea that I was a major fan of professional wrestling. I hid my wrestling addiction so very well that she was shocked when she caught me watching Monday Night Raw back in 2000. Imagine if you will, that you are in love with someone only to find out that they are a secret drug user or have a second family, which was the kind of dismay that Danielle had towards my wrestling obsession. In fact, she would face the wall when I was watching wrestling because she felt the contours of the beige wall were far more interesting.

Over the years she has come to realize that wrestling is a fun escape from reality and is pretty harmless. She has been genuinely surprised by the people in and around the business that she has met or heard about through my own adventures. Whether it was a wrestler or fellow writer over at the house or taking phone calls for me from wrestling greats I was to interview, she has found them all interesting.

I knew she was turning a corner when she would laugh at the hi-jinks and stories that surrounded the amazing lives of the people I met and wrote about. She even started to ask with interest if I bumped into such and such a wrestler.

Last Christmas was a decisive moment in Danielle’s relationship with wrestling and her love for me. Danielle had been looking for a gift that would knock my socks off, something I would truly treasure. She decided to search Kijiji (a person-to-person buying site, featuring local sales) for wrestling-themed gifts for me. Danielle was terrified to purchase an item through this site because she couldn’t take me with her for support when meeting the owner of the object. Heck the guy could be an axe murderer or something.

Upon perusing the Niagara Region area of the site she discovered a person selling a vintage wrestling calendar. She emailed the owner and set up a day and time to purchase the item at his house. With great trepidation she went to the house and knocked on the door. Soon she was greeted by a kindly older gentleman who was a gracious and a happy host. He explained to Danielle that the item was from his childhood and that when his mother died he found it in a box in her attic. He went on to detail that it gave him much joy when he was a boy.

Danielle relayed to him that I was a lifelong wrestling fan and a writer for SLAM! Wrestling. With a smile on his face he handed it over to my wife. When she went to pay him he refused because he knew it was going to someone who would care for it and get as much pleasure from it as he did. A little bit of the Christmas magic was passed from that man to Danielle that day.

On Christmas morning I opened my presents and thanked my family for their thoughtful gifts. Soon it was time for the last gift. Danielle handed me a perfectly wrapped, slim package. As I gently pulled apart the exterior paper I was met with the face of Antonino Rocca doing the jumping splits.

It was a wonderful gift. I held in my hands the “Wrestling Stars: Official Wrestling Calendar for 1956.” I was slack-jawed as I stared at this time capsule of wrestling when it was considered a true sport and the competitors were household names. The beautifully coloured, almost painting like pictures jumped off the pages as I looked at a young Verne Gagne, Whipper Watson, Don Leo Jonathon, Pat O’Connor and others. The interesting write-ups of each wrestler would have brought the fans a little closer to their favourite superstars.

The calendar seems to be produced by the wrestling office in Chicago that broadcast across the United States and Canada on the DuMont Network. It is certainly a piece of wrestling history that I treasure.

Danielle loves me enough to want to make me happy even if it means going to strange houses and jumping in to the wrestling world. It was a wonderful Christmas gift that I will treasure for many years to come.

Caleb Smith really likes wrestling memorabilia. If you have a Whipper Watson soda bottle that you want to part with, please send me an email.