NXT TakeOver is going to give Sunday’s Backlash PPV a run for its money. TakeOver: Chicago didn’t have a shortage of great professional wrestling, and told some fantastic stories in the process. Isn’t that what pro wrestling is all about?

Three out of the four championships being defended on this show were retained, but the 20-year-old Tyler Bate failed to defend his United Kingdom championship, which made its TakeOver debut in a thrilling match, perhaps stealing the show. 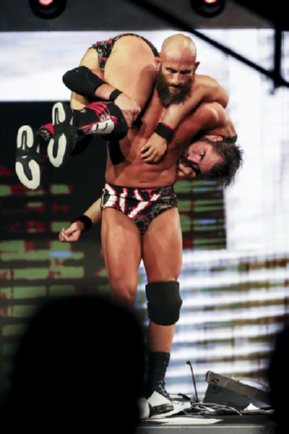 The NXT championship match between Bobby Roode and Hideo Itami wasn’t the main event, instead, DIY (Tomasso Ciampa and Johnny Gargano) and the Authors of Pain (Akam and Rezar) went on last in a ladder match for the NXT tag titles. And boy, what a roller coaster of emotions that match brought.

What a grueling match between two completely opposite tag teams. DIY proved tonight that whether it’s traditional tag team matches, or the more gimmicky match types, they can perform in any atmosphere.

Ladders were introduced to the fold pretty quickly in the match. Both teams fought on the outside in the beginning stages of the match, smashing each other into barricades and steel steps. As both members of AOP are down on the outside of the ring, DIY turn their attention to a large ladder standing tall on the top of the stage. Gargano and Ciampa both brought that ladder and set it up right in front of the ring. As AOP got up and continue to fight with DIY, the ladder remained n the front of the ring untouched, until a little later on, when the fans start to chant, “we want tables!” The AOP, both get one ladder each, and balance them from the barricade to the ring apron on either side of the giant ladder already set up in front of the ring. After failed attempts to try and put both DIY members through the ladder, DIY end up making Akam and Rezar lie flat on their back on the two ladders. Collectively, they look up at the erect ladder, elect to climb it, and at the same time frog splash AOP right through the ladders.

At that point, it seemed like that may have been the spot of the night. But it got more violent. AOP dominated DIY while in the ring. Gargano and Ciampa both had a hard time trying keep up with the two giants, however they did well on their opportunities. AOP also utilized ladders in the match-up. While both carrying one ladder, AOP was ready to smack it face first into Tommaso Ciampa, but Johnny Gargano pushed his partner out of danger, and took the vicious ladder shot to the face instead.

Ciampa went to check on his partner. AOP climbed the ladder and were ready to unhook the titles, but Ciampa let go of Gargano and stopped the giants from taking the championship by bear hugging him from the back, then German suplexing him off the ladder through two other tables set up in the corner of the ring.

DIY showed some promise in the match as well. While both teams are on top of two separate ladders set up in the centre of the ring, one of the ladders collapsed, and sent three people tumbling down, leaving only Johnny Gargano at the top. The fans erupted, thinking it’s DIY’s time to win the titles, but WWE Hall of Famer Paul Ellering entered the ring and stopped Gargano, but paid the price by taking a super kick to the face.

Towards the end of the match, DIY catch Akam on his knees with a ladder between his head. Simultaneously, they super kicked him, making them the only two people on their feet. Just as it seems like they’re ready to win the titles again, the Authors of Pain kicked the ladders, leaving DIY hanging from the top. Akam and Rezar picked them up from their suspended position, and give them a super collider, allowing them to climb up the ladder and retain the title.

The fans showed DIY the utmost respect after their match, collectively chanting “DIY! DIY!” Together Gargano and Ciampa walked up the stage holding each other, and thanking the fans for their support. However then, out of no where, Ciampa drove Gargano straight into the set, shocking everyone. Ciampa continued to beat on his partner, who looked up at Ciampa confused. Ciampa then went to the top of the announce table, and side slammed Gargano off the stage. Fans in the crowd let Ciampa hear it, giving him the most non-P.G of insults. 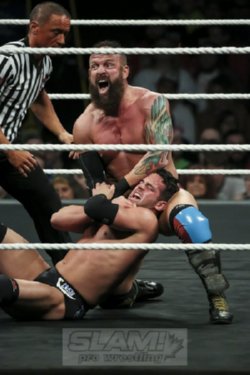 You can say NXT had a “strong” start. The opening match saw Roderick Strong and Sanity’s Eric Young do battle.

Eric Young, accompanied by two members of Sanity, made his demonic entrance to the ring. After his music stopped and the lights turned back on, the three of them stood dead centre in the squared circle awaiting Strong. The peaceful tune of Strong’s theme song hit, and all eyes were on the stage, but unexpectedly, Strong made a surprise entrance through the fans, ambushing Sanity members, Killian Dane and Alexander Wolfe.

Once Strong got inside the ring, the action started instantly. Eric Young took over the match early, pounding away at Strong. Almost every time Strong got some momentum, Sanity was there to take it away. Eric Young standing on the apron, Strong takes his legs out from underneath him, and while the ref is focused on Young, Dain throws his body at Strong, once again giving all the momentum to the Canadian, prompting Tom Phillips to say, “Roddy vs the world.” On the outside of the ring, Eric Young hits Strong with a Wheelbarrow Neckbreaker.

Strong showed a lot of heart in the match. After hitting Eric Young in the face with his knee, he hit him with a double knee backbreaker, and took home the ‘W’.

Good ol’ J.R. Jim Ross took over the announcers’ desk for this match, so you knew we were in for something special. 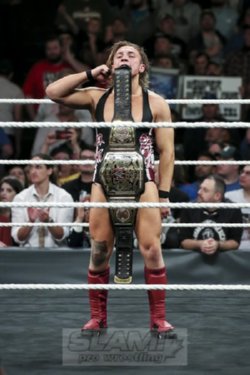 This match was a great show of technical wrestling. Started off with lots of holds inside the ring, before taking the action outside. Bate escaped from Dunne’s attempt to jam his hand into the steel steps, and countered with a jumping upper cut. Still on the outside, Dunne got in some offence of his own, performing a release suplex on to the apron. Back inside the ring, the hard hitting action continued when Bate got caught and ended up in a triangle choke while Dunne hammered away on him. Bate however, found a way to get out of that, using his strength to pick Dunne up and slam him on to the mat.

False finishes always get you riled up, especially when you genuinely think the match was going to end. Tyler Bate launched him self off the tope rope, but Dunne caught him with a vicious forearm, then picked him up and performed his variation of a sit-down power bomb.

After trading shots back and forth, Dunne went for his power bomb again, but Bate countered into DDT, which caused Dunne to slide out of the ring. Bate didn’t stop the offense, jumping on him from the top turnbuckle to the top, then quickly through him back inside and hit him with a corkscrew four-fifty, but still, Dunne powered through.

After a failed suicide dive from Bate, Dunne rolled him into the ring and hit “bitter end” and became the new United Kingdom Champion.

All three women collided when Asuka hit a drop kick to Nikki Cross from the top rope, landing on Riot.

Asuka had a good showing in the match, looking strong all match. One of the few times Asuka was out of the ring saw Riot and Cross duel in the ring, but Asuka quickly came back in and Riot hit her with a hurricarana. Riot continued her dominance in the match, with a suicide dive to Asuka on the outside, then a leg drop on to Nikki Cross from the top rope.

Nikki’s best offense came at the expense of Asuka when a failed baseball slide by Asuka resulted in her getting stuck in the ring apron, and Cross pounded away at her.

Cross’ neck breaker failed, and Riot caught her with an enziguri, then Asuka quickly entered the ring and hit Riot with a running knee. She covered both women at the same time and defended her championship.

Itami went for the Go To Sleep just seconds into the contest, before Roode slid out of the ring. Itami playing cocky early on, doing Roode’s own taunt luring him in before hitting Roode with a knee Just like the U.K. title match, this was also very hard-hitting. Both combatants hit each other with all they’ve got.

Once Roode gained some prowess, he was being cocky him self, reminding Itami, “I’m the champion!”

Itami didn’t like that and responded with a hard slap to Roode, then punishing him with a running drop kick.

Roode arm was considerably damaged during the match after Itami moved out of the corner and Roode went full-speed ahead into the ring thick ring post. The rest of the match, Roode had to do battle without his left arm.

He went for his signature Glorious DDT, but his arm failed him and couldn’t execute it.

Outside the ring, Itami tried to hit a running drop kick while Roode was against the steel steps, however Roode dodged, and Itami went feet first into the steps, hurting his leg.

Back in the ring, Itami had to fight with just one leg. He went for a GTS to try and finish Roode, but his leg gave in. Roode capitalized on the injury, this time successfully executing the Glorious DDT, but Itami kicked out.

Roode, frustrated got Itami up, but Itami countered and finally capitalized on his third GTS attempt, however Roode rolled out of the ring. Itami put him back in and pinned him but Roode kicked out.

Itami went for another GTS, but Roode countered into the Glorious DDT, held on to Itami, picked him right back up and hit him with another Glorious DDT in one motion to retain his NXT Championship.