By HOLLY LENGYEL – For SlamWrestling

I was flattered when I was asked to review Pat Laprade and Dan Murphy’s latest endeavour, Sisterhood of the Squared Circle: The History and Rise of Women’s Wrestling. Having spent almost two decades involved and around the wrestling business, I can safely say that it isn’t always easy being a female in a world that is often dominated by males.

This is perhaps even more true for the female wrestlers. 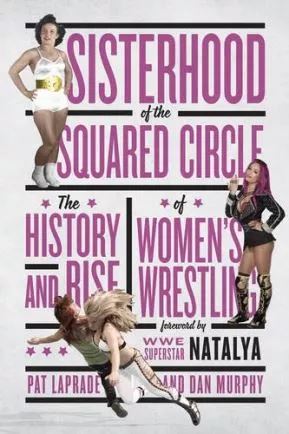 They are constantly under the microscope, criticized for putting on a couple pounds or gaining a wrinkle, subject to endless gossip, and despite this modern age that we live in, still not always treated equally to their male counterparts. We would all like to believe differently, but as much as women’s wrestling has grown — and it has, by leaps and bounds — these are things that may never completely disappear. Add that to dealing with the grind of travel and working through injuries on a regular basis, and you come to one conclusion: if you don’t possess the mental and physical toughness to handle this business, it will chew you up and spit you out. It takes a special breed to do this.

These ladies are tough, in mind, body and spirit. Sisterhood of the Squared Circle does a great job of conveying that message.

We begin appropriately, at the inception of women’s wrestling, delving into the carnival days in the 1930s with a heavy focus on Billy Wolfe and Mildred Burke. There is no shying away from the details of their volatile relationship and eventual split. Burke was a fighter, though, and most often recognized as the true pioneer of women’s wrestling.

Of course, no book on women’s wrestling would be complete without the mention of Johnnie Mae Young. Publicly, there are countless stories of Mae Young’s unique personality, and there were a few mentioned here that I hadn’t heard. D-Von Dudley is quoted as calling her “the toughest person, pound for pound, we’ve ever been in the ring with,” and you will believe it. With her brash personality, picking fights with the boys while drinking and smoking cigars, I found myself wondering how an in-her-prime version of Mae would fit into current times. No doubt she would have set the Internet abuzz on any given day.The book’s timeline continues with the Fabulous Moolah and the era of “her” girls (Rita Cortez, Donna Christantello, Ella Waldek, Ann Casey, and Judy Grable, to name a few). Moolah is often made out to be the main villain of her time, and is even referred to as a pimp by some. But with the evidence that seems to stack up from multiple sources throughout our read, it becomes harder and harder to deny. Moolah was a businesswoman, though, and did what she felt she had to do in order to survive and thrive.

From there, the book is essentially a collection of wrestler profiles from the early years all the way up to and including NXT. It is divided into sections focusing on each of the different eras (Rock ‘n’ Wrestling Connection of the 1980s, Attitude Era, TNA, etc.). Kudos to the writers for including some of the lesser known ladies of the independent world, an International Report featuring Japan, Mexico, the UK, and Australia, and even a whole chapter devoted to SHIMMER. It draws from multiple sources, peppering its profiles with quotes from various interviews and websites.

The format of the book makes it an easy read. Unfortunately this also sometimes becomes one of its flaws; the profiles are all similarly written, giving a very brief back story and then focusing on key moments in each woman’s career, mostly title wins and major feuds. It can become repetitive as many of the key moments will overlap and be repeated in the profiles of other women. The profiles are also kept small due to so many women being included, so if you’re looking for in-depth biographies, this is not the source you are looking for.These are minor negatives though, and the positives certainly manage to outweigh the flaws. Laprade and Murphy are obviously huge supporters of women’s wrestling; they cover each era and each woman without bias or trash-talking, and even include mentions of taboo subjects such as apartment wrestling, with grace. There is no smut or gossipy nature to their writing. All of the women they feature are written as the powerful, respected warriors that they were then and are now. The early chapters are more in-depth and filled with historical information, most of which will likely be new information to fans of the modern era.

The final chapter leaves us with a positive feeling, and suggests that the future of women’s wrestling is in the hands of Stephanie McMahon. Stephanie is a known supporter of showcasing strong, powerful women; she is obviously a full-fledged member of this club herself. With a planned WWE Women’s Tournament on the horizon later this year, perhaps the best is yet to come.Fighting “like a girl” never sounded so good.

Sisterhood of the Squared Circle: The History and Rise of Women’s Wrestling, published by ECW Press, is available wherever books are sold.

HOLLY LENGYEL hails from Windsor, Ontario, and has been a part of Border City Wrestling’s production team for the past 18 years. She enjoys a good kaiju movie, dabbles in photography, and attends way too many wrestling shows. Reach her at [email protected], and at @hollyLphotos on Twitter.