ORLANDO — Seemingly the entire professional wrestling world has converged onto Central Florida for WrestleMania weekend. With dozens upon dozens of shows, many happening simultaneously, these few days offer a cornucopia of possibilities for fans.

My personal belief is this: If I’m going to travel this far and spend this much money, you better believe I’m going to make it worth it. That’s why Friday, my first full day in Orlando, I made the most of it, crafting an ambitious schedule to see some awesome wrestling. 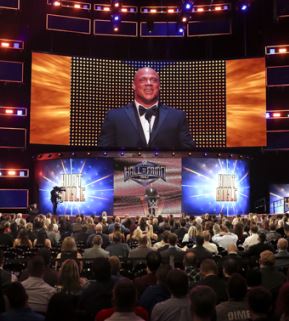 Kurt Angle on stage at the WWE Hall of Fame ceremony. Photo by Ricky Havlik, RickyHavlik.com

For 24 hours, I attended four wrestling shows — and lived to tell about it. This is the story.

It all started out at Orlando Live Events, a strange, giant building on the northeast side of the city. This building also hosts a big Jai Alai court (that’s still a thing?) and some racetrack betting. So between the wrestling fans and the bettors, it was an odd mix of people to say the least.

The first show of the day started a little after midnight, as GCW presented Joey Janela’s Spring Break. To call it eclectic is an understatement.

This show had a mix of everything. None of it made sense, but all of it made sense, making for a perfect show for the midnight time slot. There were beach balls, pool noodles and even an inflatable shark. There was Matthew Tremont and Eddie Kingston slamming each other through doors and fighting through the crowd in a blood bath. There was serious wrestling (Lio Rush defeating Keith Lee). There was mixed tag team action (Braxton Sutter and Allie taking on Andy Williams and Penelope Ford). There was grappling (Matt Riddle taking on, of all people, Dan Severn in the main event). Then there was the Spring Break Clusterf—.

This match went about 40 minutes and was absolutely nuts. To describe this, it was kinda like a Royal Rumble, with entrants coming in at random, but the only way to be eliminated was “pinfall, submission or death.” This match had everything. It had former WCW star Glacier. It had Dink the Clown. It had Ethan Page. It had several wrestlers taking moves from a literal Invisible Man. This lived up to its billing. It was a cluster.

By the time this show was over, I had been up 24 straight hours. But you don’t come to Mania Week to sleep. So I caught a few hours of shut eye and was back at Orlando Live Events for PROGRESS Wrestling at noon.

This was my first PROGRESS show, as they operate out of the U.K., and they brought their strong style brand of wrestling across the pond to a very enthusiastic crowd of about 1,200 people.

PROGRESS features WWE United Kingdom Tournament stars Tyler Bate, Trent Seven, Pete Dunne and more. But the highlight of this show was a tag team affair that saw the South Pacific Power Trip (TK Cooper and Travis Banks) take out Shane Strickland and Sami Callihan. This was everything you could want in a match. Hard hitting. High flying. Intense. It’s worth seeking out.

After an exciting early afternoon with PROGRESS, it was time to trek down I-4 in that legendary Orlando traffic to the Wyndham Resort for Revolution Pro Wrestling. Held in a hotel ballroom, the seating arrangement wasn’t nearly as good as at Orlando Live Events, but the in-ring action was superb.

The highlight of this show was an incredibly fun match that saw Marty Scurll submit Ricochet. I’ll go on the record and say I don’t think there is a single wrestler in this industry that is more fun to see up close and personal than Ricochet. His combination of athleticism, charisma and all-around fun factor is something that has to be seen in person.

The day capped off with a trip to Amway Center for the WWE Hall of Fame. Outside of some knuckleheads in the crowd (way more than last year), this was one of the more enjoyable Hall of Fame ceremonies WWE has put on, as they had a talented list of talkers on the docket and the shackles seemed to come off in terms of time restraints, as the show ran nearly four hours.

The highlights for me were Diamond Dallas Page, Jim Cornette and then Beth Phoenix playing a great rib on her husband Edge by bringing out Tony Chimel to do his trademark introduction. This was so much fun and a joy to attend.

Saturday brings a little bit of relief. On my docket is to head to Lakeland, Fla., for the Ring of Honor show. If that goes well and I’m up for it, Beyond Wrestling is running what appears to be a good show at 11:55 p.m.

For me, it’s probably a good thing WrestleMania only comes once a year. But I would not trade it for anything.