Ariel Teal Toombs and Colt Baird Toombs had some pretty big shoes to fill, completing the book that their father, Roddy Piper, had started before his sudden death in August 2015. Working on Rowdy meant plenty of challenges for the brother-sister writing combo.

“As sad and mournful as the whole thing is, it was very, in a way, therapeutic,” explained Teal Toombs, during an in-person interview at the Toronto office of publisher Random House. 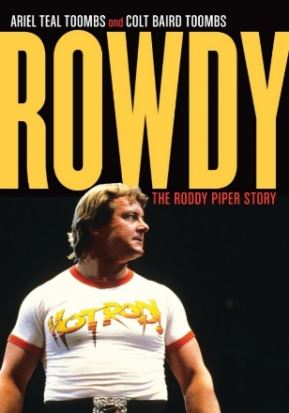 Baird Toombs, on the other hand, put it in a way that reminded one of the toughness of his father. “We couldn’t just keep it inside and move on with life. I’m a guy, that’s what you usually do. Suck it in deep and you keep going,” he said. “We were forced to talk about it, confront everything. It really was a great tool for grieving.”

For wrestling fans who miss Piper and his energetic, effervescent personality, Rowdy offers great insight into both sides of him. That was most definitely intentional. Baird Toombs explained that the purpose of the book was to get back to his roots as Roderick George Toombs. “We had talked of this before — he had gotten rid of the Rowdy a couple of years ago, his name, and just went by Roddy Piper,” he revealed. But that wasn’t the end of it.

“Then he was going to get rid of the Piper as well. He wanted to become Roderick Toombs again, because, at 61 years old, it’s really hard to be a professional fighter — you just can’t do it so you have to evolve, and that’s what he was doing. So for him, it was kind of a stepping stone. This was almost a way to kill off Rowdy Roddy Piper’s name and become Roderick Toombs again.”

The book is remarkably insightful, especially into Piper’s early life as the son of a railway policeman, moving around the Canadian Prairies, eventually moving out of the home as a teenager, and falling into pro wrestling in Winnipeg. It’s not just about the pro wrestling, which was really what the first Piper book, In the Pit with Piper, was about. “This is all the stuff that you don’t know about Rowdy Roddy Piper. This is all the stuff that’s actually true about him, there’s nothing false in this book,” said Baird Toombs. “And this is the first ever actual timeline of Roddy Piper’s life and his career. This is the first time we actually have a town and a place with all the research we had to do. We actually have dates of where and when he was.”

Piper himself had set out with Random House editor Craig Pyette to visit his sister and mother in British Columbia, before heading to Edmonton to catch up with his high school pal Cam Connor, who had made it to the NHL as Piper made it to the WWF. Other commitments got in the way of Piper working on the autobiography much more beyond those initial trips, and then he passed away. Baird Toombs saw the trip as helpful for his father: “I think that trip actually gave him a few good memories. He got to see Cam Connor, that kind of stuff, guys that he hadn’t seen in a couple of years. It gave him some good memories, a little bit of closure in that department.”

Teal Toombs was appreciative of Pyette’s involvement as they moved forward with the book. “I feel really rewarded to work with him, because he had started the project with Dad. He just had so much insight on what it was that Dad wanted to accomplish, especially when there were grey areas, that were like, okay, we didn’t want to disrespect our family or Dad in any way, or say something that we didn’t think that he’d be okay with. It was kind of like a comfort blanket to have Craig go like, ‘We were on the road, I have recordings. He was okay talking about this.'” What they didn’t have was anything that Piper had written towards his second book, but they did have some transcripts where they could use some quotes from him.

As for the research, the siblings split the duties. Baird Toombs covered most of the wrestling aspects; Teal Toombs covered Piper’s life as it related to Hollywood; and they tag teamed various family members for interviews. The division makes sense given that Baird Toombs competed in mixed martial arts and now is a pro wrestler based out of Las Vegas, while Teal Toombs is an actress in Hollywood and is currently recording her first album.

They gained a ton of insight into their father. One notable aspect of him that they discovered together was that he was disgusted with real-life and fictional depictions of violence on women and children. “He hated bullies,” Baird Toombs revealed. “[If] he was in a movie, and somebody wanted a scene with that, he wouldn’t do it. And he would get furious at them for asking, thinking that’s not right.” 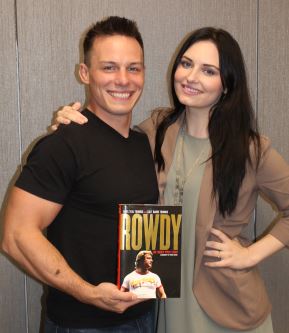 His sister continues the thought: “Some of the childhood stuff kind of explains his behavior. It really actually explained how he became who he became.”

Another example was Piper’s reluctance to get close to any of the animals in and around the household, while his kids and wife were decidedly animal lovers. His children learned that a dog of his died when he was young, and it stuck with him, said Baird Toombs. “He just didn’t feel comfortable. And it makes sense now, after doing the research.”

Besides more from their other siblings, Falon and Anastasia, and their mother Kitty (“I’m sure Mom could probably write a trilogy,” said Teal Toombs), they mused about people they wished they could have talked to. Adrian Adonis and Andre the Giant come up, as does their paternal grandfather, Stanley Toombs, who had so many conflicts with his son.

But both agree they would have loved to sit down with their father, even for a short while, to ask questions. Some might find that a touch odd, given how many interviews that the friendly Piper gave through the years. But like a lot of athletes, Piper took the best parts of stories and polished them up to present again and again.

“To call our father’s made-up history a lie, though, is missing the point,” they write in Rowdy. “He was selling a character — it was how wrestlers of his time made a living. Since wrestlers were so recognizable when out in public, they couldn’t break with those stories when they were away from the arena. … That’s not to say that Roddy’s origin story was all a fabrication. It might well have evolved over the years, blending true elements — living on the streets, coming fifth in a world bagpipe competition — in ways that got him through whatever reporter’s question, promo or work he was facing. He owed his fans and his business convincing entertainment, not autobiography. Over the decades, fact and fiction fused, and he forgot the lines between them. Add a few undiagnosed concussions to the mix and chronic pain from a litany of injuries, and whenever he was asked for a story, he found it easier to just tell the story he’d been telling for almost 40 years.”

Baird Toombs considered the grey area between kayfabe and reality. “There’s part of the true story and the parts with the glitter that make it better,” he said of his father’s many stories. The challenge for the authors was to tell the truth. “There’s no lies in this one. That’s who our dad was, the guy we got to know growing up. … Once you read it, it really is an inspirational story. … It shows that somebody can come from nothing and be literally anything they want.”The book does not shy away from Piper’s issues, from a violent temper to steroid use to going to rehab to break an addiction to alcohol. Teal Toombs is proud that her father went through a lot and stayed strong, overcoming his demons and cancer. “I think for the fans, that would be what he would want them to take away — just to stay strong and get through whatever they’re going through in life,” she said.

In the end, the 416 pages of Rowdy tell a bigger story than just the in-ring entertainer. “We’ve been telling everyone, even if you’re not a wrestling fan or a Rowdy Roddy Piper fan, we think and hope that this book will make you a Roderick George Toombs fan, because it’s really about him,” concluded Teal Toombs.