By KAITLIN DIEMOND – For SLAM! Wrestling

When I first started learning about women’s independent wrestling in 2004 it was nowhere near as popular as it is today. Finding women I could relate to wasn’t easy, partially due to the fact that social media hadn’t yet become what it became and partially because most of them fit the Barbie doll mold. I always idolized Chyna as a child for the sheer fact that she wrestled against and defeated men.

I was always told conflicting stories in school and at home. Story number one was that girls could do anything boys could do (thanks Mom). Story number two was that boys are and will always be stronger than girls (thanks for nothing public educators). I just didn’t understand how those two statements were possible, because they didn’t add up. 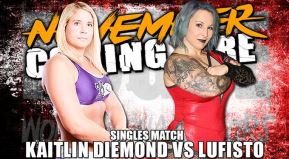 When I discovered LuFisto (Gen Goulet) she was beating the absolute shit out of men, she was like my very own independent version of Chyna and therefore became someone I immediately looked up to. She was wrestling for CZW, blood pouring out of her beautiful face, no fear in her eyes. I was mesmerized by her strength, ability and passion. She always kept story number one alive and well in my heart, from the time I was a kid through all of the subsequent years.

I began training that year at the young age of 14. My trainer at the time, Mike O’Shea, told me that to legally compete in Ontario I would have to wait until I was the age of 18. That was not ideal for me but I was more than happy to train for four years and have the greatest debut match of all time on my 18th birthday. I was going to wrestle my best friend Eric who was also training with me at the time because this was our dream and nothing was going to stop us! Oh but we couldn’t do that either. Once I turned 18 I would only legally be able to compete against other women. Umm what?! Why? The Ontario Athletic Commission (OAC) had its rules. Apparently the lawmakers always grew up with story number two.

Meanwhile LuFisto was making her living and having legendary matches all over the world competing against men (after she ditched her initial Precious Lucy gimmick). When the WWE runs an event in Ontario they can have Chyna wrestle Mark Henry without issue. The OAC denies LuFisto her basic human right to earn a living competing against men in this predetermined “competition” in the entire province of Ontario. How was that fair? It wasn’t. It was bullshit.

LuFisto filed a complaint to the Ontario Human Rights Commission, and eventually won the case. [She detailed the fight on SLAM! Wrestling in 2006: Female wrestler pins Ontario Athletic Commission] The OAC stopped regulating pro wrestling. I wonder how badly it stung Ontario Athletics Commissioner Ken Hayashi — a man who had ruled that men and women were not equals in the ring — to lose that case to a woman?

So suddenly 16-year-old Kaitlin Diemond is allowed to debut, though not as awesomely as I thought, but of course I would never turn down the opportunity. All of this I owe to LuFisto for standing up for herself and others. Any/every man and woman who have had intergender matches in Ontario. Every wrestler who got to begin their dream before the age of 18 owe a huge thank you to LuFisto for making it all possible.

With her living in Montreal for the majority of my wrestling career I always day-dreamed about the possibility of being able to wrestle her. However, even though we weren’t super far away distance wise, she was a total superstar and I knew I would have to become a somebody before I would ever get that chance.

Fast forward 11 years later. I still don’t consider myself a somebody. However I’ve done some things in this business that many only dream about. It’s still hard to get the attention of promoters and even fans at times, the internet indy hype machine has never been particularly kind to me. I don’t overly doll myself up and I don’t work a fast paced, flashy, spotty style that appeals to so many. I get told on a regular basis that maybe I’d be signed if I “acted sexier.” What does that even mean? I don’t know. My mother always told me to be myself (thanks again Mom). So all I know how to be is who I am and who you see. Who I am is not an act and I can make no apologies for that.

I always wondered if LuFisto was given those two other conflicting stories of 1) Always be yourself and, 2) No not like that, be more sexy. I always wondered if she felt underappreciated or undervalued because she wasn’t 5-foot-6, 129-pounds with the perfect (impossible) measurements. I always wondered if people’s words made her get bitter and despise the very business that I know we both love? I’ve tried not to let it happen to me but I have my moments, and she’s been at this for so much longer than I have. 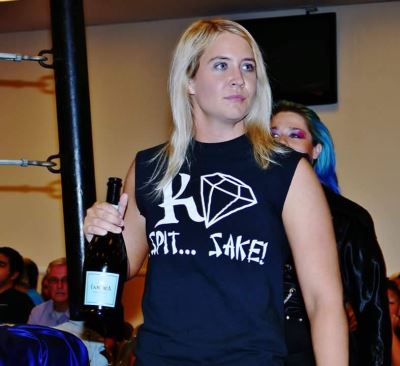 I knew I would be working this event with Rogue Women Warriors — the women’s division of Atomic Championship Wrestling — for a few months now. I spoke with LuFisto directly as she is involved with bookings for the company. I was nervous to tell her how much money I wanted, despite knowing that I’m worth it just because of how much respect I have for her, as the money is also coming out of her wallet. Before I had to bring it up, she offered me exactly what I would have asked her for (and what a lot of promoters either don’t think I’m worth or are too cheap to pay, and therefore settle for greener talent). It was exciting to me that she knew I was worth what I ask for.

For weeks and weeks I’ve wondered who I would be wrestling. It would be up to LuFisto herself so I assumed I would be up against one of her students (who I often used to wrestle against in NCW Femmes Fatales). The news broke the other day. I’m wrestling LuFisto. Not only is that amazing, but knowing she picked me as her opponent and actually wants to wrestle me is making my head spin. Women’s wrestling careers don’t normally last long. Rarely do people get to wrestle the people they looked up to before getting involved. I’m so excited that I do. LuFisto is my hero and after reading this she should be your hero too. You’ll have a hard time getting the grin off my face November 5th in Stevens, Penn. To me this will be a priceless moment that I will forever remember.

Thank you Gen! Thank you for everything you have done for wrestling, thank you for always being you, and for being a role model. Thank you for the match even though it hasn’t happened yet. Just thank you.

Kaitlin Diemond is an independent professional wrestler who has competed all over Canada, the United States, Mexico and Japan. You can find her on Facebook and Twitter.