Cornette takes his act — and opinions — to the UK

Without a doubt, Jim Cornette is one of the most vocal personalities in wrestling. Having spent a lifetime in the sport, from managing, to booking, to promoting and announcing, Cornette knows a thing or two about getting people to watch what goes on inside the ring — when Cornette talks, people listen.

And with WWE’s flagship show Raw recently experiencing poor ratings, Cornette is critical on WWE’s ‘comedy writers’ writing scripts for wrestlers, and its negative impact on the business.

“Writers write books. They write books that are stories about things — made up or real,” Cornette explains in the run up to only his second time in the UK, preparing for his spoken word show with Jim Ross. “With booking — the proper title ‘booking’, was never used. No one in the 1940’s ever said ‘our booker’; it was ‘our matchmaker.’ Because that’s what it is, booking is matchmaking. Just like Joe Silva in the UFC — he could be termed their booker, but instead because it’s a legitimate sport, he’s their matchmaker.

“The alter-ego of this in wrestling, now is the booker. It wasn’t a guy who wrote words out for the talent to read in their interviews. It wasn’t a guy who was hired because he had a degree in something from a major university, to script out a movie fight scene between two wrestler or to physically lay out an angle between two guys which would make them made at each other to necessitate a match or rematch.

“You found reasons to put guys on your cards — once guys are over, you find a reason for those guys’ paths to cross, either for a championship, or because they make each other so angry, or there is some kind of issue and they either have a fight, and you make a match. And the people buy tickets.

“These guys sell the match, because they know how to get themselves over once you’ve told them why they’re mad at each other. 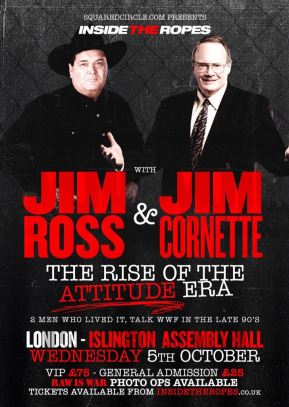 “That’s an almost irreplaceable talent now because for years everyone who has been learning, has been learning how to be a comedy writer, and script dialogue to ‘keep the story arc going’, and meanwhile no one knows how to manipulate the personalities in a way that makes sense in a way that people are going to buy into.”

Cornette’s reasoning for the direction in which modern wrestling has headed is backed up by numbers — casual fans, in particular those watching on a Monday night just don’t seem to be as interested in wrestling as they used to be. There are many mitigating factors for this, such as the advent of technology taking away from television rating across the board, but it still remains — Roman Reigns et al are not as universally known as the stars of 20 years ago. Lying the blame for this at the feet of bad writing, Jim underlines this point.

“The last big one was Stone Cold Steve Austin and Vince McMahon. The writers have plenty of ideas, but you can trace every great professional rivalry — Austin and Rock, Austin and McMahon, Hogan, Flair, the ’80s and ’90s — the big pops in business came from giving the guys who can really get over a reason to cross paths. That’s booking. That isn’t pre-produced, tightly choreographed, contrived, with fake patter that gets guys and issues over, It’s finding guys that can get over, and manipulating them against each other. That’s booking.

“They have ideas for people and try to find people who look like those people. Instead of saying — ‘okay, people seem to like this guy, let’s run with him’ they’ve already figured out what they want to put out there, they just need to find someone to play him.

“It’s ludicrous. It’s why people don’t connect, and when they do connect, it’s for something the writers didn’t expect. So they get mad and bury the poor guy.”

Cornette sites that current (soon to be departing) UFC matchmaker Joe Silva and Conor McGregor are two reasons why UFC are still doing well on PPV. With McGregor recently lighting the wrestling world on fire with a bravado tweet taking shots at the WWE roster. When asked if he believes UFC has taken away from wrestling, Cornette proclaims.

“Oh my God, no. No, wrestling changed, which is why UFC started overtaking it. I’ve always said; Dana White is the most successful pro wrestling promoter in the world — UFC is the most successful wrestling promotion in the world — the only difference is that it’s real. But otherwise, it’s been so long since we were using the shit that wresting invented — the ways to hype a fight and get guys over and their issues out there. Not an over the top angle, but an angle where guys are mad.

“Wrestling wasn’t using that stuff any more, because we were too busy blatantly slapping people in the face with the fact that it was all scripted. And the UFC started using it — because it works. Why does it work? People believe in it — it works.

“What we used to do is just lie convincingly that these guys hated each other and here’s why. Now, the UFC says tells and shows people why the guys hate each other. That is the only difference with wrestling — ours was manipulated, and when it went over the top, people stopped believing it. UFC is basically just a conservative territory — like a Florida or Georgia from 40 years ago. Title. Big cash prize for the winner. Really simple — but it works. That’s why these guys are fighting.”

Listening to Cornette speak is fascinating, and there’s no doubt if you have the chance to see a spoken word show of his, you’ll have a good time. “It’s going to be fun,” Cornette explains when talking about his spoken word show. “I don’t leave the house any more, I’ve cut down on my travelling. Now people think I’m around because they hear my podcast every week, and I’m definitely saying something to piss people off, but in person, I generally make personal appearances only one or two times a month. Then I’ll take winter off, soon I’ll be concentrating on my new book.”

Jim Cornette will appear with Jim Ross for ‘The Rise of the Attitude Era’ at London’s Islington Academy Hall on October 5. Tickets available at www.insidetheropes.co.uk.