DALLAS — There is nothing like WrestleMania Week. A completely crazy wrestling experience with something for everything. Saturday was no exception.

Now, if you don’t absolutely love wrestling, this is probably not a schedule of events I’d recommend. If you love all aspects of professional wrestling, though, however exhausting the day may have been, it was one to remember.

My day started at noon with EVOLVE 59. This was the company’s biggest show ever and they packed the Eddie Deen Ranch with a reported 1,500 people, many of whom, myself included, were there to see the big main event big Ricochet and Will Ospreay. 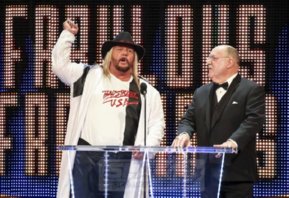 Let me start by saying this: Watch this match immediately. I won’t even be offended if you don’t read the rest of my thoughts. That’s how great this match was. Never before have I seen a combination of mat skill and pure athleticism. It was a hard-hitting match, but in this day and age of worry about concussions and such, these two had a great contest and didn’t kill themselves doing dumb things. This is what wrestling should be.

In the end, Ricochet picked up the win. The crowd gave the match a standing ovation, and deservedly so, as this was the type of match that makes you realize why you love wrestling in the first place.

I can’t say enough about these two wrestlers. I’ve heard Ricochet’s reputation and have seen him in Lucha Underground, but seeing him in person is another thing altogether. As for Ospreay, he is undoubtedly going to shine in New Japan Pro Wrestling.

I’d be remiss if I also didn’t mention two other competitors that particularly impressed me this weekend: Zack Sabre Jr. and Matt Riddle, who faced each other on this show.

Sabre Jr. is right up there with Ricochet and Ospreay as far as I’m concerned. His match with Ospreay on Friday night will easily be in the top-five of matches this weekend, and has talent as far as the eye can see. Riddle, who I am very familiar with from his time as an MMA fighter, is so far beyond where you’d expect him to be this early in his career. He has only been wrestling for a little over a year now, but is far beyond his years.

What I loved about EVOLVE this weekend is how it wasn’t a competition to see who could do the craziest stunt. Sure, the action was hard-hitting, but if you love pure professional wrestling, as far as I’m concerned, it doesn’t get any better than EVOLVE right now.

From EVOLVE, it was straight to the first of Jim Ross’ three one-man shows, held about a mile away at the House of Blues. This was refreshing for a few different reasons — it was decidedly off-color, which is great because you get to see these people in a new light, and as Ross noted, he doesn’t have the need to pull any punches.

Ross started the show by discussing WrestleMania and his thoughts on it and entertained the crowd. He discussed his firing — not retirement — by WWE on Sept. 11, 2013 (a date he called back many times), and noted he had the choice of reinventing or retiring at that point. He decided to reinvent.

Ross’ guests for the evening were none other than Jeff and Karen Jarrett, who brought even more color to the show, especially Karen, who was as unfiltered as they come throughout the show.

Karen Jarrett left no stone unturned, especially with her thoughts on TNA president Dixie Carter. “Who?” she said, prior to unleashing a word that is unfit for print.

The show was quite a bit of fun, as the trio answered questions from the crowd, and Karen kept trying to get the more political Jeff into trouble, which was amusing.

A few blocks away from the House of Blues was the American Airlines Center, where the WWE Hall of Fame Induction Ceremony took place Saturday night.

As our own Nolan Howell already has a full report on this up here on the site, I’ll add my two cents:

The Fabulous Freebirds were awesome. No other way to describe it. The whole presentation, from the video package, to The New Day introducing them, to the speech, to bringing out Kevin Von Erich, was simply amazing. Even though it went 45-plus minutes, it kept the crowd captivated the whole time, which is definitely a testament to it.

Sting wrapped up the night with a wonderful, heart-felt speech that captured the essence of “The Icon,” before he officially announced his retirement from in-ring competition. The crowd gasped at the notion before coming around and giving the former world champion a standing ovation. The combination of Sting’s speech and Ric Flair’s introduction made this a must-see.

Between these three events, totaling about 12 hours from start-to-finish, this was definitely the most exhausting wrestling day I’ve ever encountered. But from the in-ring action I saw to the stories I heard, it was well worth it.

Now it’s time to buckle up and get ready for WrestleMania!