With the bland Fast Lane behind us and as WrestleMania and perhaps more WWE mediocrity looms on the horizon, fans have once again raising their pitch forks and torches against WWE despot, sorry, I mean WWE Chairman and CEO Vince McMahon as it is he who as Sid Vicious would say, rules the world…or at least the WWE Universe as we know it. 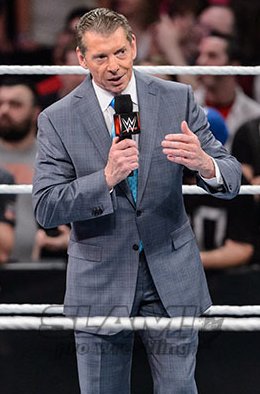 Positioning Dean Ambrose as a human piñata – Thanks for showing up, Jonathan – and solidifying Roman Reigns as the face of the company despite enough boos to spark a 9.5 magnitude earthquake and offering no surprises whatsoever at the Fast Lane show had everyone pulling their hair out. The return of 46-year-old Shane McMahon, of all people, to face the Undertaker at Wrestlemania and the resurrection of an angle approximately 15 years old has some scratching their heads.

Nobody should be surprised though, not for one second. Like the Great Pyramid of Giza, the design of drill bits and crowbars and the Goblin Shark, Vincent Kennedy McMahon will never, ever change. He has always been as stubborn as a mule and as controlling as an army general.

Unfortunately, McMahon and in turn his company have become infamously known for another trait and that is they are sadly out of touch with the world and the very fans who pay for all those cozy offices in Stamford, Connecticut.

One only has to look at the endlessly scrolling, blinking Christmas tree of digital doom that is the new WWE web site and the marketing material behind it that trumpets such novel, revolutionary ideas such as being able to share their content with your friends on social media, the indomitable lag the WWE Network suffers every time they stream a pay-per-view, the total absence of customer service on social media, their awful attempts at comedy and that they treat international superstars as rookies, that the WWE is as old and as clunky as your grandparents’ car.

In an era where customers are now broadcasters on social media and can do great damage to even the most respected and celebrated brands, Vince McMahon and the WWE continue to almost proudly ignore it all. While companies both big and small routinely interact with their customers on social media, addressing concerns, mitigating problems, WWE remains as silent as Sabu. Stuck in the Stone Age as far as customer service is concerned (especially when it comes to Twitter), they just keep on trucking. Ignorance is truly bliss for the WWE.

I guess they have never heard of Amy’s Baking Company.

With the live crowds encouraged to cheer, boo and chant to their heart’s content, professional wrestling is perhaps the most interactive entertainment medium. Due to their reactions, the fans can decide if someone is a face or a heel, if someone has the spotlight shone on them or if they are banished to darkness but not always. Nothing can always go the way fans want them to. That would stifle all of the surprise and the suspense but not listening to your fan base, your customers, is not what’s good for business.

But when has McMahon ever reversed course in the face of legitimate criticism or concern? When has he ever listened to outsiders: the public, the fans, the media or analysts? About as often as Braun Strowman performs a Hurricanrana.

Let’s take a short trip down memory lane shall we …

Vince McMahon is the guy who was responsible for one of the biggest fumbles in sports history. Along with NBC, Vince reportedly sunk $35 million into the failed XFL football league that folded up after only one season. Even pre-school children knew this was a bad idea.

This is the guy who even though he had no experience running a major league sports team founded the Cape Cod Buccaneers of the Atlantic Coast Hockey League. The team was dissolved after a year.

This is the guy who unleashed the World Bodybuilding Federation and a bunch of gimmicked muscleheads he was swooning over upon the world for two horrendous years until he finally pulled the plug after atrocious pay-per-view buy-rates.

This is the guy who continues to produce Tough Enough even after six seasons of poor ratings and poor critical reception.

This is the guy who signed off on such wrestling gimmicks as Duke “The Dumpster” Droese, Mantaur, Cryme Tyme, The Gobbledy Gooker, Saba Simba, Eugene, The Goon and Bastion Booger.

On that note, this is the guy who continued the Rock ‘n’ Wrestling era for far too long until he was dragged kicking and screaming into the Attitude Era by the competition.

With all this in mind, is it really all that surprising that Vince McMahon and his submissive monkey minions are pushing stars such as Roman Reigns despite such massive fan disapproval? Not really.

How do you get an out of step Vince McMahon and WWE to listen? Easy, you have to speak Vince McMahon’s language. You have to hit him where it has always hurt the most, in the ratings and the pocketbook. You stop watching Raw, you stop watching Smackdown on television, you know, just long enough to make a respectable impact. If you don’t already, watch Lucha Underground, Ring of Honor, New Japan, Impact or NXT instead.

As has been proven in the past, when the wallet gets lighter and the ratings sink lower than Tama Tonga’s ring crawl, then and only then will Vince McMahon get the message — loud and clear.