Historical writing is for the driven and the obsessed, those who feel compelled to tell stories from the past. Dr. Stephen Greenfield and Mark De Courcy have formed a tag team for just such a purpose — to keep the legacy of famed tough guy and trainer Billy Riley alive. 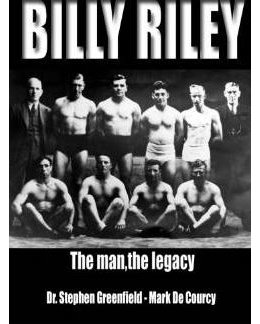 For those unfamiliar, Billy Riley is a product of the 1920s and 1930s, a competitive pro wrestler who plied his trade around the globe. But perhaps more important was the knowledge he gathered on the way, which he poured into his training facility in Wigan, England, known as The Snakepit.

A master of catch-as-catch-can wrestling, Riley developed into a master of submission moves as well, which brought many to his school to learn, including Billy Robinson, Karl Gotch and Tom “Dynamite Kid” Billington. In fact, Robinson once told this author, The Snakepit “was the greatest gym in the world, without a doubt.”

With their self-published book, Greenfield and De Courcy are attempting to share Riley’s story to a greater world. SLAM! Wrestling caught up with both authors to understand the process and the dream behind Billy Riley: The Man, The Legacy.

SLAM! WRESTLING: How long did you work on the Billy Riley book? What were some of the challenges?

DR. STEVEN GREENFIELD: We started work on the book over two years ago. At first it was going to be much larger in scope, however, the original concept for one book turned into three, possibly four books. There were a number of challenges, firstly many of the wrestlers are no longer with us. However we were lucky enough to speak to those who are still alive and well. Roy Wood, who now runs the Snakepit, put us in contact with the families of the wrestlers which was a wonderful experience. By the very nature of the wrestling, there are many “facts” out there that simply weren’t true when you spoke to people who were there, or family members. Entire chapters were sometimes re-written because of new information. If we had more time and funding we would have travelled to where he wrestled in the USA to dig more into that side of things.

MARK DE COURCY: We have worked on this book for about two years off and on. Some of the challenges with researching a topic such as wrestling, pro wrestling especially, was separating out “kayfabe” of the historical information. A lot of time was spent chasing down false leads, sorting through misinformation and corroborating facts as a lot of the information out there was based on opinion, rumours and in some cases deliberate falsehoods. That’s why Stephen and I make such a point about referencing information. That way people can research the matter themselves and corroborate what has been said, it helps raise the standards with relation to historical information by producing a lead to verify what has been said, and hopefully provoke further research by others. With some of the statements made by the wrestlers for instance, we tried to find numerous references at different points in their career to better reflect their viewpoints and help separate kayfabe from personal views. A significant difficulty was that there wasn’t a lot of information relating to many of the wrestlers, including Billy Riley, out in the public which meant a lot of time in the library, speaking to wrestlers’ families and chasing down hints and leads.

SLAM! WRESTLING: Did you try to seek out a conventional publisher?

MARK DE COURCY: We didn’t attempt to seek out a conventional publisher at all. Given the subject matter this was felt to be a specialist interest work, which was intended to be a manner of recording some of the forgotten wrestlers, and act as a testament to their devotion and training in the catch-as-catch-can wrestling style found at Riley’s gym.

SLAM! WRESTLING: What went into the decision to self-publish? How are you promoting it?

DR. STEVEN GREENFIELD: We are dealing with a niche book, that was one reason, secondly it gave us more control. Neither myself or Mark are taking any money from sale of the books; all the profits from the book are being used to support a scholarship scheme at the Snakepit Wigan, and self-publishing meant that more money could get where it needs to go — ensuring the future of catch-as-catch-can wrestling.

MARK DE COURCY: The decision to self-publish was made at the outset to allow full creative licence with the research, production of the book. It meant we didn’t have to compromise to another’s deadline, or vision on the subject matter, which was necessary as over the two years we seemed to come up against brick walls, both believing that we had exhausted leads only for a new avenue to suddenly produce a wealth of information. Additionally this means that as new information comes to light, or new material is produced, we are able to release updated editions and include any developments with ease. As yet we have done very little promotion, we had the book launch at The Snakepit’s Catch-as-catch-can Competition Event held on the 8th November at Bolton’s Macron Stadium, with Riley’s wrestlers Roy Wood, Seamus Dunleavy and Michael Moore (Tommy Moore’s son), and Billy Riley’s daughter Jayne Byrne in attendance. Other than that we have given sneak peeks and a promo video on The Snakepit’s Facebook page.

SLAM! WRESTLING: What do you hope that a fan from today would take away from the legacy of Billy Riley?

DR. STEVEN GREENFIELD: That he was a link, he wrestled in the catch-as-catch-can matches on the fields, he wrestled in the “all-in era” and later wrestled and promoted in the Lord Mountevans era. This had a huge effect on the gym he ran and the wrestlers — indeed champions — the gym produced.

MARK DE COURCY: Ideally, we would hope a fan would recognise the numerous and grand impacts that Billy Riley had on wrestling. There are many facets to this legacy. Billy Riley’s ethos and training meant that catch-as-catch-can was kept alive when amateur wrestling changed the manner by which many wrestled in the UK. Billy Riley was involved with the launch of “All-in” wrestling in the UK, then acting as a wrestler, then a trainer and promoter. Billy Riley produced many British and international champions in professional wrestling shaping the development of the British professional wrestling scene.

The legacy from Billy Riley is felt in the Japanese professional wrestling circuit today from their exposure to Billy Joyce (Bob Robinson), Roy Wood, Billy Robinson and Karel Istaz (Karl Gotch) and with the stylistic off-shoots such as shoot-fighting, pancrase and MMA. These students of Billy Riley have passed on their knowledge and training experiences to others and so the legacy continues to this day.

SLAM! WRESTLING: If you could go back in time and interview anyone about Billy Riley, who would it be and why? (Besides Billy Riley.)

DR. STEVEN GREENFIELD: That is an incredibly difficult question to answer, but I suppose I would have to say ‘Pop’ Charnock, one of his coaches.

MARK DE COURCY: If I could go back in time and interview somebody about Riley it would have to be Waino Ketonen or perhaps Benny Sherman. Waino Ketonen trained with Billy Riley in Lancashire early on and he knew him in America. Benny Sherman knew Billy Riley later on and would give a fantastic insight into how Billy Riley had developed and his thoughts at that point in his life.

SLAM! WRESTLING: If you could ask Billy Riley one question, what would it be?

DR. STEVEN GREENFIELD: Purely for myself, “Will you teach me?” But more seriously from the technical viewpoint I suppose it would be, “Over your career, can you tell me how catch-as-catch-can wrestling developed?” From a historical standpoint it would be, “Can you tell me about your time in America?”

MARK DE COURCY: I would ask Billy Riley, “How had catch-as-catch-can developed over the course of your life?”