James “Kamala” Harris never spoke a word for the majority of his wrestling career, but he reveals all in his new autobiography, appropriately titled Kamala Speaks, which is set for an October release. 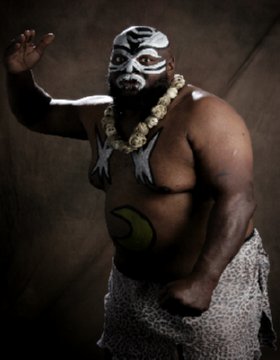 “I don’t really have a lot of road stories, but a lot of it is inside the ring and outside the ring,” Harris said.

Some fans might not be aware that Harris recently lost both of his legs to complications from diabetes and high blood pressure. However, he is obviously just as active now as he was when he wrestled. And he has the full support of his friends and family; in fact, it was his friend, Kenny Casanova, who actually convinced Harris to write the book.

“It was all Kenny’s idea, and he made me interested in it. When Kenny called me up and talked to me a few times, he persuaded me into doing it,” Harris said. “It took a lot of time, a lot of phone calls and a lot of things I had to gather. Kenny would call a lot of the wrestlers and he would have them call me and remind me of things, and I would say, ‘Yeah, I remember that.'”

Casanova wrestled in the same era as Harris. He was one of the men that proudly wore the Kimchee mask and acted as Kamala’s handler.

“He (Casanova) and I wrestled together. And then he sent me a picture of he and I, so that’s how he made me remember him,” Harris said.

Casanova not only convinced Harris to write the book, but he also came up with the idea to start a campaign on Kickstarter to raise money for his friend.

“I’m also a Fulbright Scholar, an English teacher/writer, and a wedding DJ and event organizer. After learning of Kamala’s battle with diabetes, I decided to use my unique skill set to offer some help,” Casanova said. “I figured Kamala’s story alone in book form could be one answer to lost earnings. If written correctly, it could mean great supplemental income for Kamala for years to come.”For Casanova, it was a pleasure working with Harris again, as well as several other former friends and colleagues, who all jumped at the opportunity to lend a helping hand to their mutual friend.

“At first, Kamala wanted to make sure my offer was real. It’s not often someone wants to do something without much back in return. Therefore, I had to be grilled by his ‘excellent judge of character’ and friend, ‘The Birdman’ Koko B. Ware,” Casanova said. “After getting his (Koko’s) blessing and after six months of interviewing Kamala, many more names from the wrestling world stepped up to help, all saying ‘Kamala is a great guy,’ and ‘He really deserves this.'”

The Kamala character was unquestionably Harris’ biggest claim to fame. It was the brainchild of Jerry “The King” Lawler, but Harris certainly took that ball and ran with it. He wrestled for over 30 years, and still made periodic appearances in the WWE and independent promotions, after retiring from in-ring competition. It just goes to show how popular the character was. 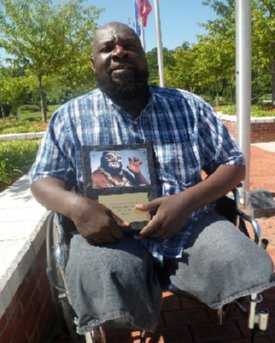 A recent photo of James Harris. 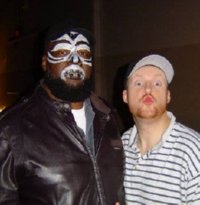 Kamala had one of the most unique looks in wrestling history. Everything from his painted face and body to his ring attire to his facial expressions, made him stand out from the crowd.

Most people who know him, and even some who don’t, know that Harris also has quite the singing voice, so wrestling was never his only talent; it’s just what he was best known for.

The Kickstarter campaign has already surpassed its original $12,000 goal. And that amount will likely increase as time goes on. Actually, a new goal has been set at $19,500, and Harris is well on his way to accomplishing that one also.

“We decided to shoot higher to $19,500 and add larger pictures and quality to this autobiography,” Casanova said. “The stretch goal will help increase the page count by almost 100 with bigger and better images and also give James sales, without Amazon taking a big cut. As other awesome backers have already pledged, we ask that you essentially preorder your book on Kickstarter.”

Of course, the donations will not only help increase the page count or quality of Harris’ autobiography, but will assist Harris in other ways as well, hopefully making life a lot easier for him.

“The target was $12,000 and the target was for planning out the book and a lot of other stuff that Kenny had put together,” Harris said. “Kenny was hoping to raise enough to get me a van; a handicapped van, but I didn’t think it would be possible.”