Total Divas is returning for a third season, starting on September 7th, and Rosa Mendes, the feisty Latina from Vancouver, with roots in the Czech Republic and Costa Rica, is joining the cast. She sees it as a “huge promotion.”

“As everyone knows, I haven’t really been on TV the last year and a half. It was a big, huge promotion for me,” she told SLAM! Wrestling. “It was a dream come true. When I got the call that I was going to be on it, I was so happy that I screamed and I cried — and I was actually in an airport and it made for quite a scene.”

The premise behind Total Divas, which airs on E!, is pretty simple: follow the WWE Divas around, documenting their lives in and out of the ring. 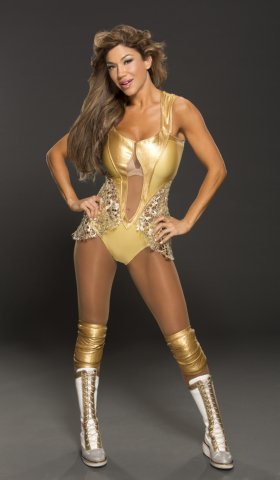 WWE fans know Rosa Mendes a little, but not a ton, because her character has never really been showcased on its own, and she has often been a valet or manager. That has changed recently, and she has been working a lot at house shows and polishing her in-ring skills.

Through Total Divas, viewers will get to know Milena Leticia Roucka as well,

“That’s important to me because they see Rosa, the feisty, angry Latina, but they don’t know the other side of me, so it’s really, really cool that they get the see [that],” she said. “All of us WWE Superstars and Divas, we’re human, we have problems, we have issues like any other people do and it’s cool that they can relate to us more. So that’s cool that the universe will be able to relate to the Divas and see that we are down to Earth people too.”

Other cast members this season include Brie Bella, Nikki Bella, Cameron, Naomi, Natalya, and Eva Marie, as well as Summer Rae, who joined in season two.

The storyline on TV where the cast members of the first season fought against Divas who weren’t on the show had its roots in reality, admitted Mendes.

“To be honest, when I wasn’t picked for the first season, I was really sad. All of us want to be part of the show,” she said. “Of course, you’re going to have a little bit of jealousy — if someone says they’re not jealous, they’re lying. But of course there’s going to be a little bit of jealousy when other Divas are getting promoted, and other opportunities, like covers of magazines and a lot more matches on TV, and other opportunities. So, yeah, of course that was legit.”

And there is always jostling for the spotlight.

“Of course, in the Divas division, there’s a lot of competition, and we all want the Divas title, we all want TV time, so it can get a little crazy, to say the least.,” she laughed. “So it’s cool to see that as well, and obviously very entertaining.”

New girls in the locker room come along all the time, like two-time WWE Divas champion Paige, who is just 22, 12 years younger than Mendes.

“For me, I’m not a jealous person — when I have a boyfriend, I’m a jealous girl — but when it comes to career-wise, when I see someone like Paige that is awesome in the ring, I’m impressed by it and I welcomed her with open arms,” said Mendes. “She’s really down to Earth and laid-back. Of course, some of the other girls, they feel threatened, but to be jealous, it’s kind of, to me, you have to be confident in your in-ring skills and not have to be jealous, to be excited about working with someone so talented. Everyone is so different. I thought it was so cool that she won the title her first day. It was definitely a surprise for everybody, but I was legit happy for her. It’s really cool having her in the locker room. I like her a lot.”

Mendes said that in reality, she’s a nice person and holds no grudges; perhaps that is changing though.

“In the locker room, I’m always friends with everybody, I’m always the girl that everybody likes, and now that I’m getting more opportunities, it seems to be a little different now,” she mused. “Of course, when people talk about you, whether it’s good or bad, you should embrace it, because that means you’re doing well, but of course, you get surprised when it happens to you — you don’t expect it. I’ve had to deal with those kind of issues. Of course, it hurt my feelings a little bit in the beginning, but now I’m getting a lot thicker skin and I’m realizing that this is a business. All of us do want the Divas title. All of us do want TV time. All of us do want matches and opportunities. Now I’m seeing the true side. It’s challenging, but it’s a really, really cool experience. It’s adding fuel to the fire. It’s making me extremely motivated.”

Doesn’t that play against your natural Canadianess of being a nice person?

“Exactly. We’re the sweetest and more kind people, but when you cross that line, us Canucks,” she threatened. “You know how it is!”

Yet that whole Canadian aspect of Mendes has never been played up. Her ability to speak Spanish has helped her cultivate a different market for WWE and the Divas, and she’s okay with that.