Guest column: How an unprofessional referee can ruin a great match

By STEVE HOOPER – For SLAM! Wrestling

The other night I had the opportunity to watch a recent match between Michael Richard Blais and Richie Rage, from a PWA show in Calgary. The match itself was quite good; there were a few things here and there I could comment on, but on the whole it was a solid match and I enjoyed their hard work. I’ve never had the pleasure of working with Mr. Rage, but I certainly remember working many times with a porky little white kid named Chucky Blaze who has matured and turned into a good-looking worker named MRB. Great to see, kid! But the reason for these comments is not to critique the work of the wrestlers themselves, but the referee.

As I mentioned, the boys put in a solid match and worked hard, but what disappointed me was that every single thing they did or didn’t do was made to look silly and unprofessional in my opinion by the inclusion of a ref who simply shouldn’t have been there. This is not a personal slam at this ref; I don’t know the person, I’ve never met the person, and I have nothing against the person. 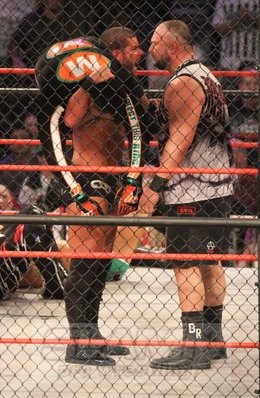 Quick, tell me which one is the referee from Lockdown’s main event on Sunday! Is it Bobby Roode on the left or Bully Ray on the right? Photo by Bill Otten, B&B Productions

But as someone who has been a referee for many, many years, I am certainly in a position to comment fairly and offer suggestions.

The young lady was in the middle of an excellent match wearing leather boots you would wear to a bar for a night out, jeans with rips in them (which I understand is “cool” these days, sorry if I sound like an old fart), and a black t-shirt with some sort of writing on the front — your basic rock band t-shirt. This young lady looked like she had walked off the street and somehow snuck into the ring, as compared to being considered an “official” of the match.

I’m not going to comment on the job she did, other than to say it was less than stellar. That said, everyone has been green and everyone needs a chance to learn. What I am trying to get across here is the promotion and the match was made to look like crap, simply because they didn’t have someone in the ring to actually officiate a tremendous match. The seriousness of the match disappeared. Instead of a contest between two men attempting to win a hard-fought victory, it turned into what looked like a complete sham. When the three-count finally did come, it was done at such a velocity that it came across as completely planned and as if she was just waiting for that moment to slap three times. Through most of the match, the young lady’s hair was in her eyes at every pinfall, so I’m not clear on how she could possibly see if the shoulders were down or not anyway.

All I can say is this: what we, the three-man (or woman) team do in the ring is magic: Two gladiators fighting it out to the bitter end until the victor gets his hand raised by the official and a “W” is placed in the record books next to the winner. If we expect people to take anything we do seriously, the image of what we do has to be taken seriously. Putting young, inexperienced men or women in the ring as a ref who can’t even bother to purchase the proper attire for the position really tells me the actual interest level the person has or the willingness to learn the position. Sadly, it also is a good temperature-check as to where we are on the independent scene these days.

Perhaps even more perplexing is to watch one of the so-called Big Two commit exactly the same error, made even worse by the fact it was done on a pay-per-view! Witness the TNA Lockdown PPV from last Sunday. Dixie Carter assigned Bully Ray as the special Guest Referee for the Team Dixie versus Team MVP Lethal Lockdown Match. OK, this has been done before many times in the Fed and in TNA. So how does Bully Ray enter the ring as the official? In his regular wrestling gear! Doh! Are you kidding me? I am confident that 99% of the fans in the crowd and watching on TV already believed that Bully Ray was going to get involved in the match at some point. But could you at least, at a very minimum, put him in a referee’s shirt to attempt to portray him as such and not insult the intelligence of all the fans?

Does anyone recall Vinnie Mac wearing the ref shirt, sleeves torn out, and bulging biceps showing? At least he tried to appear as if he was a legit referee, even though we all know it was part of the storyline. Bret Hart, Steve Austin, Ken Shamrock, I could go on and on referencing matches over the years with a special referee assigned who was actually a wrestler. But I can honestly say that I don’t ever recall seeing a Guest Referee appear in the ring wearing the exact same outfit he would if he were wrestling in the match.

At the Cauliflower Alley Club reunion in Vegas last year I had the pleasure of conducting a referee seminar with Billy Silverman, Trevor Blanchard, and Vicious Verne Siebert. We talked about many of the “Pro Wrestling Ref 101” rules such as always wearing black underwear (if you rip your pants in the ring, black underwear won’t show through), wearing black socks to match your black shoes and pants (Never, ever wear white socks with black shoes and black pants — it looks terrible!) and most of all we talked about wearing a complete referee’s uniform whenever stepping in the ring. Look professional, act professional, and people will accept you as a professional. But wearing jeans with holes in them or wearing wrestling gear just tells the fans you might as well not have any rules since there isn’t a professional in the ring to enforce them anyway.

To the young lady in the match I am referring to above, please don’t be offended. Get some training, get proper referee’s attire, and make your promotion proud. Who knows, you could be the next Rita Marie (Chatterton) and be working for WWE one day! One thing I do know, however. Rita would NEVER have been caught in the middle of the ring on a Professional Wrestling card wearing jeans with holes in them or without her hair tied back. To be taken seriously you have to be and act serious. If not, what you are truly doing is taking AWAY from the two gladiators in the ring. No matter what they do, no matter how well they do it, if the show does not look professional, their match will never look professional.

Steve Hooper is a veteran of the Stampede Wrestling rings as a referee, and currently resides in Panama where he plays with trains.