Entertaining to a fault: Snitsky continues to tackle challenges

If you went to a WWE wrestling show between September 2004 and December 2008 and weren’t in some way entertained, one thing’s for sure, it wasn’t Gene Snitsky’s fault. It couldn’t have been. “I was always the guy that would do anything just for the reaction,” said Snitsky. And, if you ever had a chance to see him on WWE programming, you know that statement couldn’t be more true.

Snitsky explained: “I’ve always loved the theatrics of wrestling and I was actually an actor before I started wrestling and just always goofing around making people laugh.” He indicated the sheer entertainment value of WWE had a lasting effect.

“It was really cool to me as a kid seeing that kind of stuff so it just caught my attention. You know I watched it all through junior high, high school, [and] college. Me and my buddy [Robb Harper] played football together [and] we used to go as a wrestling tag team every year for Halloween for parties on campus,” Snitsky told SLAM! Wrestling, recalling the tandem’s name — the Twin Tackles. 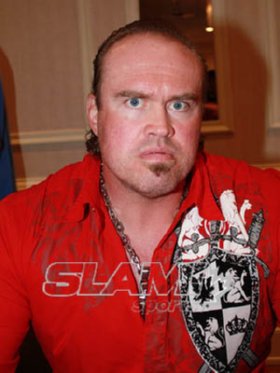 Gene Snitsky at a fan fest in July 2010. Photo by Christine Coons

“I was a fan since I was 10 year old. I was fortunate enough to be really good at football so I wanted to pursue that as far as I could [and] see how far I could take that, knowing in the back of my mind that someday I was going to pursue the wrestling as well,” said Eugene Alan “Gene” Snisky (who lacked the “t” in his last name pre-wrestling). His football days started at Panther Valley High, in Nesquehoning, Pennsylvania. By his senior year, he was 6-foot-7 and 235 pounds, and made first-team all-state.

At the University of Missouri, Snisky had a rough go academically. He dropped out for a year, going to Lehigh County Community College for one semester, until returning with a different major — hotel and restaurant management; that meant he had to site out the 1990 season.

The following campaign, he contributed on the offensive line for the Tigers. After graduation, he signed with the Canadian Football League’s Birmingham Barracudas in April 1995; he apparently didn’t make much of an impact in the CFL, as his name doesn’t appear in the league’s all-time roster.

Through it all, the idea of one day wrestling as a member of the Twin Tackles remained with him.

“When I ended up getting done playing football I was like: ‘Hey [Robb] you should move out here. There’s a wrestling training camp here in Allentown and we could pursue the wrestling thing.’ He was like ‘oh yeah’ so he actually ended up moving out to Pennsylvania and we trained at the Wild Samoan Pro Wrestling Training Camp. He unfortunately had to move back to Wisconsin — his father passed away — and so he went back home to help his mom with the farm. I ended up pursuing a singles career,” explained Snitsky.

Wrestling training and preparing for the gridiron, however, were completely different. “With wrestling you have to learn a whole new protocol ’cause you’re basically falling down. When I was playing football, I didn’t want to fall down. When I was wrestling, I had to fall. So you know it was totally different. Luckily I kind of picked it up really fast,” he said.

He was also fortunate enough to receive training and mentoring with one of the game’s greats ­- Hall of Famer Wild Samoan Afa. “He took me under his wing and kind of developed me for how he saw fit because he knew I had the potential and he kind of wanted to guide me along,” said Snitsky, who relates that as much as 90% of his independent wrestling experience was in Afa’s WXW promotion.

In October 2003, Afa secured him a WWE dark match tryout in Wilkes Barre, Pennsylvania. The promising rookie didn’t disappoint and signed a developmental contract in May 2004.

The next month, Snitsky moved to Louisville, Kentucky, to further hone his skills in Ohio Valley Wrestling. “I spent a lot of time working with Bill DeMott and Jimmy Cornette on the shows, because Jimmy wrote the shows and all that kind of stuff, but I wasn’t there too long.”

On September 13, 2004, Snitsky made his WWE Monday Night Raw television debut in a no disqualification match against Kane who was accompanied to the ring by a “pregnant” Lita. During the match, Lita entered the ring to remove a chair off a prone Snistky. Kane quickly began arguing with Lita leaving himself open to an attack from Snitsky who struck him with a chair across the back. The blow forced Kane to the mat on top of Lita who suffered a storyline miscarriage.

While there was no baby born on Raw, the incident did give birth to the infamous Snitsky catchphrase: “It wasn’t my fault.” The line was a big hit with fans and soon thereafter signs with the catchphrase began popping up in crowds. Looking back Snistky says, “I wish I had a dollar for every time I heard it because people to this day come up to me and I probably hear it three to four times a day, every day.”

This was a unique reaction and WWE brass decided to take a unique approach. “Vince [McMahon] came to me one day and he said, ‘I want you to cut all your hair off and go to the make-up lady and see if she can get something put on your teeth,'” Snitsky recalled. “It was actually like a paint on enamel and then you brushed it off with toothpaste and a toothbrush after the matches. It was actually one of my least favourite things.” Four or five times each week, for roughly 18 months, Snitsky would paint his teeth to appear as unsightly and yellow as McMahon intended. To make matters worse, Snitsky says the paint “didn’t taste very good.”

On the other hand, Snitsky was successful in pitching another character trait that he did find very pleasing — a foot fetish. “I went to Vince with that [idea] and told him that I wanted to incorporate it ’cause I have a foot fetish in real life. He said, ‘That’s a great idea.’ and then we started doing it like two weeks later,” said Snitsky. “I enjoyed that.”

In early 2007, Snitsky was moved to the ECW brand. “I thought it was a great opportunity for me and my character. It was a great start. I really, really liked it. I liked the concept. I liked everything about it. And then I did it and then they drafted me right back to Raw,” remembered Snitsky, who returned to the Raw roster where he would perform for that brand for another year and a half.

Looking back on his WWE run and his various rivalries, Snitsky says “working with Glen [Jacobs] was like a dream come true.” He adds that Jacobs, better known to WWE fans as Kane, “pretty much took me under his wing once I got up to WWE and he helped me along. Him and I had an awesome feud and I thought really good storyline. He was a huge, huge help. To this day we still keep in touch and talk and all that kind of stuff. He’s probably my favourite guy to work with and probably my favourite storyline.”

Snitsky adds that he is “proud of [his] body of work” citing that even “nine to ten years later and people are still talking” about it. His WWE career ended in December 2008.

His desire to entertain lives on. In fact, it’s further blossomed. He’s currently doing stuntman work, while focusing on numerous acting opportunities, most recently appearing in the Mighty Morphin Power Rangers. He adds that he finds acting particularly rewarding as he thoroughly enjoys playing different characters. Snitsky also continues to wrestle on average about four times per month.

On October 10th, he’ll be making his first of three scheduled appearances for the Manitoba-based CWE promotion. The shows are part of a seven-city Canadian tour dubbed the “It’s not my fault tour.”

“CWE has been host to dozens of former WWE, TNA, ROH, and international stars, but none as physically large, intimidating, and disturbing as Gene Snitsky, making Snitsky a very unique attraction that CWE has never seen before.,” said CWE founder Danny Warren, who wrestles as Danny Duggan.

If history is any indication, fans will leave these shows entertained and in this case, it’ll at least be partially Snitsky’s fault. Considering his love of entertaining an audience, he wouldn’t have it any other way.

James De Medeiros (@JamesDeMedeiros) is a communications professional who’s a former editor of a national health and fitness magazine, and is a writer of books, as well as magazine articles on a wide variety of topics.