When a company conducts interviews like Kayfabe Commentaries does, every so often there is one that will have widespread appeal; Timeline: The History of WCW – 2000 – As Told By Vince Russo definitely falls into that category.

While viewing the video, my father in the next room overheard the audio and asked me to turn it up so he could hear what Vince Russo had to say about the importance of a performer’s onscreen character, and how too many of today’s wrestlers are focused on having what Internet reviewers deem are four-star matches. My father is not a fan of wrestling, but the fact that he wanted to hear Russo’s thoughts gives a real indication of how compelling the two and a half hour interview is. 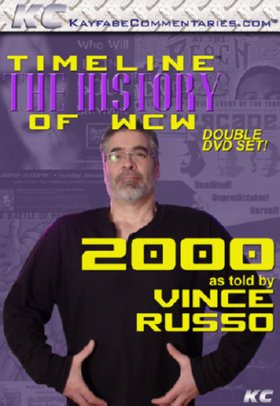 While the interview questions are focused around Russo’s time working for WCW in 2000, Russo invites the interviewer, Sean Oliver, to feel free to ask him any other questions he has because Russo indicates that this will be his last interview. Oliver takes full advantage of the opportunity and the interview veers off onto the WWE Attitude Era of which Russo was such a vital part, his time with TNA, and the state of the professional wrestling industry today.

In many ways, some of the most compelling parts of the interview are Russo’s thoughts on how the neglect when it comes to the development of compelling characters and storylines has led to a stagnation in terms of interest and television ratings for both WWE and TNA; and that there doesn’t seem to be any indication that will change anytime soon.

As well, Russo extensively discusses why he has become so disillusioned with the industry, which can be summarized essentially as those who he dealt with saying one thing to him directly and another thing behind his back. These portions of the interview come across completely believable in large part because Russo isn’t afraid to acknowledge the mistakes he feels he has made and the level of detail he discusses it in. It is readily apparent that Russo at this point in his life seems to want to make peace with his past and with some of those who may feel negatively towards him.

The interview, also, doesn’t hide from perhaps two of the most controversial title holders in the history of the WCW World Heavyweight Title — David Arquette, and Russo himself. With regards to putting the title on Arquette, Russo indicates the idea originated with Eric Bischoff, but that he supported the idea as he felt it would help spike ratings and get people to tune in to the next WCW program. As for his winning the WCW Title, Russo again indicates that the reasoning behind it was similar to his support for the Arquette decision, and he details how much concern he had with the match because of the multiple concussions he was suffering at the time.

Russo makes it very clear that the concussions he suffered during his in-ring action played a role in his absences during his time under contract with WCW. In total Russo states that he probably only worked nine months in total for WCW and is a primary reason why he feels that the blame that some have assigned him for the downfall of the company is unjust. It’s difficult to argue against him, and Russo goes on to discuss other elements that affected the success of WCW, particularly when he was brought back as part of a creative team with Eric Bischoff.

When the idea was first proposed, Russo indicates that he knew it wouldn’t work due to Bischoff and him not truly knowing each other, and not having a built any trust between them. Thus, throughout this tenure Russo asserts that as much as he wanted to trust and believe Bischoff he constantly worried that later on he would be undercut by him. Russo describes this time in his life as the most difficult in his career and that he suffered enormous depression.

Other topics that are covered during the course of the interview include Tank Abbott, Bill Goldberg, Sid Vicious, Scott Steiner, Mark Madden, Bobby Heenan, Vince McMahon’s reaction when he left WWE, Jeff Jarrett’s laydown for Hulk Hogan, and much more. All of these are extremely interesting and Russo provides a fascinating perspective on what was going on behind the scenes, though you may not agree with him on everything. Also, while Kayfabe Commentaries have marketed this as Russo’s last interview on professional wrestling, during the interview itself Oliver asks Russo if he would be open to being interviewed about the WWE of 1998 and Russo replies in the affirmative.

Kayfabe Commentaries’ Timeline: The History of WCW – 2000 – As Told By Vince Russo is one of the strongest interviews in years and is worthwhile for not only fans of professional wrestling, but also non-fans who have always wanted to understand what the appeal is of the industry.