Mat Matters: Critics, not fans, should bite their tongues

The best thing about pro wrestling is anyone can buy a ticket, take a seat and cheer or jeer to their heart’s content.

Pro wrestling is live and it is interactive. That has always been one of the honoured traditions of the industry. 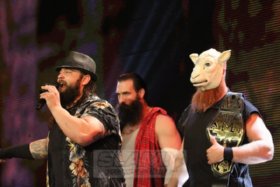 The Wyatt Family hone their act in Florida at NXT in June. Photo by Bill Otten, B&B Productions.

In the past few weeks though, some media types and unfortunately, even some wrestling legends, have taken issue with that long-standing convention. They’ve slammed fans for communicating their opinions after spending their hard-earned money on tickets to a show they are encouraged to be a vocal part of.

During Mark Henry’s promo on the July 1st Raw, fans mocked him by chanted “What?” in response to his long-winded diatribe.

That night on Twitter, Mick Foley wrote: “Nothing I like less than that stupid ‘what’ chant. Takes away from the product, throws off the timing on promos, and just flat-out sucks.”

Jim Ross also Tweeted: “No more WHAT chants. YES is fine. Fans can chant whatever they want but WHAT chants seem dated too me. Just my opinion.”

Here we have two squared circle legends who’ve made their living playing off of live crowds ripping those people for not reacting the way they want them to. The comments were rather shocking considering they came from two icons who I respect in the highest degree for all of their contributions. They are usually the voices of reason. They are usually the ones who put things in perspective for everyone but those comments were completely unfair.

A pro wrestling event ain’t a night at the opera. You can agree or disagree with their reactions but neither of them were in any position to judge those fans, especially when the person cutting said live promo is a heel who is expected to be booed and taunted.

It is a live edition of Raw, which unlike a regular house show, can test the patience of even the most loyal fan due to the constant breaks in the action. On an already bloated telecast, Henry chewed up more match time by explaining his reasons for attacking Cena and his phoney retirement. In the feud, Henry is the heel and Cena is the face.

With all that in mind, how did Foley and Ross expect the fans to react? I just don’t get it.

Next up, the debut of the Wyatt Family on the July 8th Raw. First off, I am going to swerve severely off topic for a moment.

I admit the promos were well done. Very polished and very creepy but haven’t we done the whole evil hillbilly angle before? Anyone remember the Godwinns? And what’s with the Skinner-Nailz inspired drab wardrobes of both Luke Harper and Erick Rowan? Love those overalls. Are they gonna wrestle in those every single week? Ugh.

I have undeniable respect for the Rotunda and Windham families. BlackJack, Barry and Mike continue to be three of my all-time favourites which is why I want nothing but the very best for Windham but dude, Dan Spivey wants his gimmick back, yesterday.

With that out of my system, let’s get back to the matter at hand.

Critics ripped into the Baltimore crowd for chanting “Husky Harris” when Rotunda appeared as Bray Wyatt, the leader of the Family, seemingly a cross between The Sawyer Family of Texas Chainsaw Massacre fame and Max Cady from Scorsese’s Cape Fear. They felt it was insulting and rude to throw his old persona in his face during the debut of his new character on Raw.

I say, tough crap. The resentment of these critics is misplaced. Maybe if the WWE had done a better job managing people’s careers in the first place the talent wouldn’t have to reappear as 45 subsequent personalities.

Furthermore, I didn’t see these people complaining when Matt Bloom returned as the much improved Lord Tensai and the crowd chanted “Albert” or began the “Shave your back!” chants again.

I was never a fan of Albert but I really feel for Matt Bloom these days. Tensai was different, he was gaining ground and he was portrayed as an honest threat. It was a massive step forward and improvement for Bloom. The WWE had another formidable and legit heel in their stable.

Now, the WWE has demoted him to a comedy act. After all that effort to establish his new personality, they’ve relegated him to comic relief again. What a wasted opportunity and a waste of talent.

Nobody cries for Bloom — or Ryback, for that matter, when fans chant “Goooolberg” — but they are furious on Rotunda’s behalf.

The beauty of pro wrestling is the fans have the final say. Their unexpected reactions can change the course of history. Fans brought back Hulkamania by cheering Hogan on in his match against The Rock at WrestleMania 18. Fred Ottman’s Tugboat gimmick was so despised by fans, the WWE teamed him with Earthquake in the Natural Disasters. Dolph Ziggler has such positive support at the present time, the WWE had no choice but to switch his and Alberto Del Rio’s roles in their current feud.

That is the magic of the industry. Unlike music, film or literature, the crowd has a major impact on the pro wrestling product and its ultimate direction. Like it or not, the people have spoken and have every right to express how they feel about everything from the wrestlers themselves, to the vignettes, to the pace of the matches, to the angles presented that night. For good or bad, it is their money, it’s their prerogative and that’s the way it should always be, like it or not.