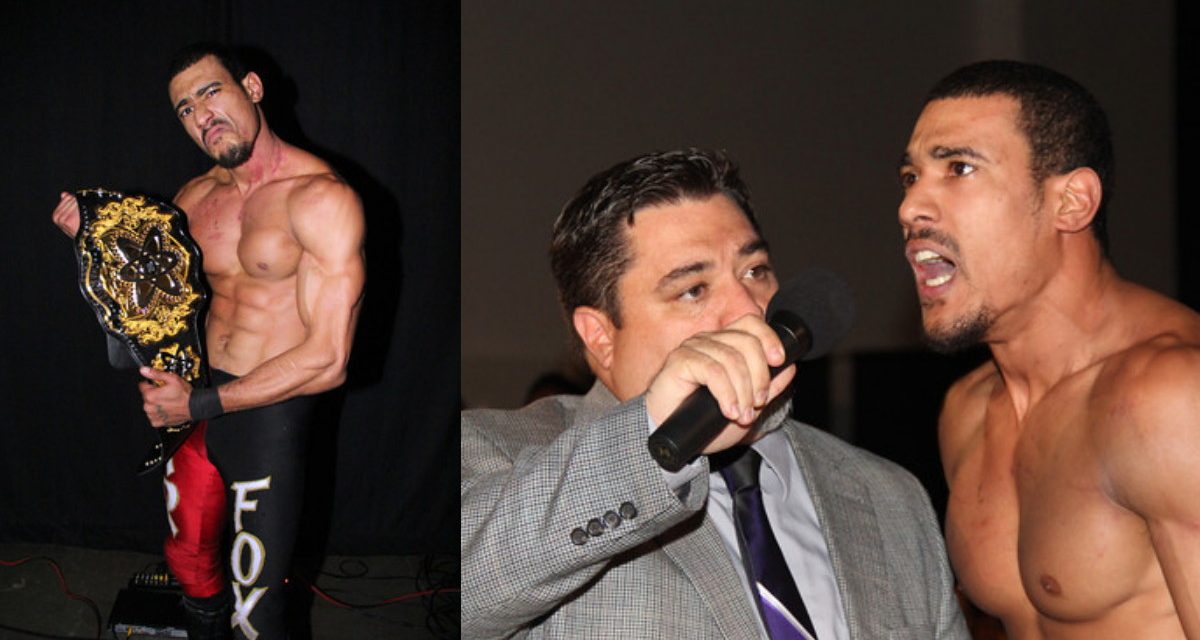 Live from the Meadowlands Expo Center in Secaucus, N.J., EVOLVE 19 was marred by a number of stream problems, including a late start to the show, but it ultimately delivered.

In the opening bout, Sami Callihan advanced to the semifinals of the EVOLVE title tournament in a four-way match. I’d love to tell you what happened, but the stream was basically worthless the entire time.

Fox uses his speed early to get the advantage on Davis. Fox goes to the top, but Davis catches him and plants him with a spinebuster. Davis takes over from there and works Fox over, especially working on the back, putting Fox back-first into the ring apron. Fox, though, avoids a big boot and lands some chops on the outside, but then eats a hip toss right into the ring apron. Ouch.

Davis continues to work the back in the ring. Fox tries to fire back, but Davis sends him flying, again back-first, into the corner with a buckle bomb. This is all Davis here. Fox is fighting valiantly, though, but just can’t get going. Davis wants to deliver a uranage off the ring apron, but Fox elbows out and DDTs Davis on the apron.

Fox follows that with a big flip dive, but Davis hits a big running knee back in the ring but Fox is able to kick out at two. Fox hits an Ace Crusher, and goes for a springboard one, but Davis avoids it and hits a Wheelbarrow German suplex and then Three Seconds Around the World but Fox kicks out at two.

Fox goes to the outside and pulls a table out from under the ring and props it up on the ramp. He goes to throw Davis over the top onto it, but the referee pulls Fox down. Fox then avoids a clothesline and Davis delivers it right to the referee. The bell rings and there is mass confusion. 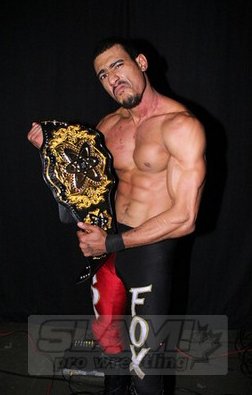 Gargano gives Cassidy some free shots early to no avail. The Swamp Monster gets involved and hits a Bronco Buster on Kendrick behind the referee’s back. So Kendrick grabs a mic.

I wish I could tell you what happened for the next few minutes, but the stream cut out.

It appears Cassidy and Gulak had Gargano isolated, as Kendrick comes in on fire. Death Valley Driver connects for Kendrick on Gulak. Gargano back in and he slams Cassidy and Kendrick tags in and hits a frog splash for two. Cassidy goes to the top and tries a twisting moonsault but gets more of the guardrail than he does of Gargano. He’s OK, though, and goes back to the top and hits a top rope splash on Kendrick for two.

Gulak suplexes Kendrick into the corner for two. Gargano comes back in and hits a DDT/STO combo on both Gulak and Cassidy. This one is all over the place. Michinoku Driver connects for Cassidy on Kendrick. He has the Big Squeeze applied but Gargaro breaks it up with a superkick.

Referee has lost all control here. Kendrick grabs Gulak and hits Sliced Break No. 2 to end it.

As Callihan enters the ring by springboarding over the top, he lands wrong on his leg. He rolls out to the floor. He eventually comes back into the ring and is down in the corner. Well, the bell rings and Taylor goes immediately after the knee. He takes Callihan to the floor and is really going after the knee, working it over with the guard rail. The count is at 19 when Taylor rolls Callihan into the ring, saying, “I’m not winning like that.”

Back in the ring, Taylor locks in the Figure Four. He lets that goes and goes for the top for a moonsault, but Callihan rolls out of the way and Taylor doesn’t even land in the same area code. Callihan starts to fire up with a variety of suplexes. Taylor, though, counters and locks in a half crab. Callihan fights it. Taylor releases the hold and slams Callihan’s knee to the canvas. And again, Taylor goes back to the half crab in the centre of the ring, but Callihan gets a little bit of space and is able to make the ropes.

Calihan starts to get going and hits a sitout power bomb and then turns it into the Stretch Muffler. Taylor is the one in agony now and he taps out!

Quick, athletic start here by both men. Ricochet takes a moment to gloat and Fox drop kicks him for his troubles. Fox follows with a flip off the apron. This is insane. Ricochet puts Fox on his back and then rams his head repeatedly into the bottom of the turnbuckle. Ricochet goes to the top, but Fox shoves him off the top and all the way over the guard rail and to the floor. Then Fox follows up by running across the ring, to the top and over the guard rail himself onto Ricochet.

Back in the ring, Ricochet hits an Ace Crusher followed by a standing shooting star press for two. More insanity here. Ricochet dead-lifts Fox and hits a tight back suplex for two. Ricochet goes back to the top but Fox cuts him off and kicks him off the top to the canvas, then comes off himself with double knees to the back of the head.

Fox flying all over the ring here. He gets caught by Ricochet, though, and off the top rope, Ricochet hits a release back suplex that sends Fox head over heels halfway across the ring. Ricochet again cut off by Fox as he goes to the top, but Ricochet headbutts his way out. He finally gets Fox down and misses the 630. Fox grabs him in a crucifix cover and gets the win!

Swinging neckbreaker connects for Cannon. This basically turns into a handicapped match, though, as the rest of Reed’s cohorts get involved. Caleb Konley hits Cannon with a nice tornado DDT. This is bad news for Cannon. Reed and Konley take their eyes off the prize (and onto Trina Michaels) and it costs them as it gives Cannon time to fire up. But Michaels comes in the ring and starts hitting on Cannon, giving Larry Dallas time to come in and clip Cannon’s knee.

It’s not looking good for Cannon, but he’s saved by Uhaa Nation, who comes in and cleans house, making his return to the ring after getting injured last year. Cannon is now recovered and puts Reed away to get the win.

Some comedy to start with the Smash Brothers getting the better of it, but the Bucks take over. Matt Jackson hits a springing back scratch. They are working over Player Dos big time here. Dos low bridges Nick Jackson and sends him flying, and then rolls past Matt, but Nick had pulled Player Uno off the apron right before Dos could make the tag.

Finally, though, Dos is able to make the tag. But Nick hits a nice spinning back elbow, but Uno responds with a big right hand, then hits a neckbracker on Matt. Matt, though, comes back with a sleeper attempt. Things starting to pick up, but the stream is starting to be very jumpy.

And then the feed completely cut out.

Wish I could tell you what happened.

Callihan immediately goes to work on Fox’s neck. Fox is in bad, bad shape right now. Callihan in control until they brawl into the crowd, where Fox delivers a superkick on the floor. Fox puts Callihan onto the ring apron and then goes to the top and delivers a guillotine leg drop onto the apron. He then hits one dive, and goes for another one but his leg gets caught in the rope and he goes head-first to the concrete floor. Callihan adds insult to injury by throwing Fox head-first into the guard rail with a Saito suplex. Then another.

Fox appears to have a big cut on his arm now. He barely beats the count back into the ring, where he’s greeted by Callihan, who puts the boots to the neck. Callihan takes Fox to the outside and drops him on the concrete again.

Callihan sets Fox up on the top rope. He wants a superplex, but Fox fights out and sends Callihan off the top and then hits a rolling sexton. Fox up first and hits two bicycle kicks and then a springboard Ace Crusher. He goes to the top and hits a big Swanton Bomb but Callihan kicks out at two. Fox again to the top and goes for a stomp but Callihan gets his feet up.

Callihan hits a Yazuka kick. He goes for another but waited too long and Fox rolls him up for two. Now Callihan resorts to slaps but Fox no sells them and hits a Death Valley Driver. He goes to the top and hits a 450 Splash. He’s got him, but no, Callihan kicks out at two.

Fox goes up to the top but Callihan counters and hits a German suplex off the top. Callihan with a power bomb and then the Stretch Muffler. He turns that into a half crab. Fox is hanging in there and somehow gets the bottom rope.

Both men exhausted. Callihan up first, but he gets loaded up on the top turnbuckle again, and finally, after many tries, Fox hits Lo Mein Pain and that does it!

Callihan takes the belt after, only to present it to Fox. He raises Fox’s arm and the two embrace.