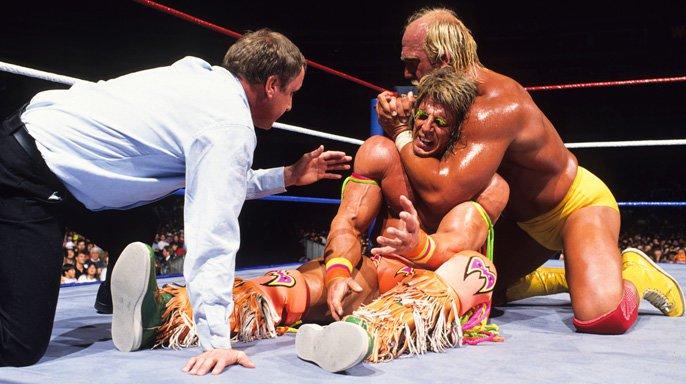 The first time WrestleMania was held outside the United States and in my hometown. I was there as a fan and the crowd reaction to the Warrior – Hogan bout was astounding. It was so clearly divided and so fervent. Interestingly enough, the same thing would happen years later when WrestleMania once again returned to Toronto. What boggles the mind to this day is why The Hart Foundation match played out as it did when Bret Hart was hugely popular in Canada?

Capitalizing (exploiting?) on the war in Iraq, the WWE pitched a double main event of sorts with Randy Savage putting his career on the line against the Ultimate Warrior and Hulk Hogan taking up arms against Sgt. Slaughter. While Big Boss Man had one of the best matches of his career against Mr. Perfect, Jake Roberts and Rick “The Model” wrestled in perhaps the worst match ever: a blindfold bout. The collection of mediocre to poor bouts really overshadowed anything noteworthy.

The WrestleMania franchise goes into a downward spiral with back-to-back cruddy shows. At eight, fans either witnessed crap or classics. There was no in-between that year. It is not often I would recommend actually skipping the main even but Hogan, Sid is just plain awful. Many of the veterans stepped up to the plate in grand style but it wasn’t enough to save the show. I still get chuckles out of the Piper – Hart interview segment.

The first time WrestleMania was held at an outdoor venue. Filled with disappointing and lacklustre matches, the event is only noteworthy because of its surprising main event finish. Let’s hope it is the last time we see J.R. in a toga and the last time chloroform is used in an actual wrestling match. Lex Luger and Perfect’s furious feud was a missed opportunity.

WrestleMania briefly gets back on track before sinking into sludge once again. The sibling rivalry between Bret and Owen Hart would escalate into one of the WWE’s greatest feuds. The image of Owen glaring from the runway as Bret and others celebrate in the ring was a haunting image to be sure. It was the Ladder Match between HBK and Razor that stole the show and still ranks as one of the greatest WrestleMania matches of all time.