CALGARY – Tucked away across the road from the Scotiabank Saddledome sits the Stampede Pavilion. During events, concerts and the Calgary Stampede people often overlook it. At one time it was a hotbed for professional wrestling. Legends like Andre The Giant, the Funks and Harley Race appeared there, and stars like the British Bulldogs, Bret and Owen Hart, Brian Pillman and Jushin Liger kickstarted their careers inside the building. It has been 14 years since wrestling appeared at the Pavilion, but that changes Friday night. 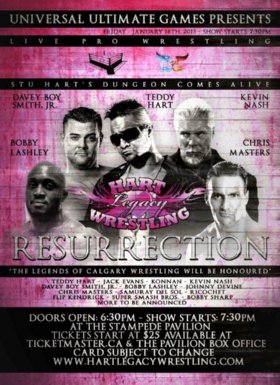 “This is a result of a core group of people to return Calgary to its stature as the core of professional wrestling in Calgary. Friday is in fact a Resurrection, with the great stars of yesteryear who tore it up in the ring on many a night. The families of legends who have sadly left us. We will have a battle royal, tag team events and much much more. Most importantly you will see the special kind of fireworks that the Hart Legacy stood for for many years,” talent relations manager Spencer Tapley told media at a recent press conference. “It is a prime example of professional wrestling’s presence reaching back over 100 years in Calgary. The first significant event was a world title defence by Frank Gotch in 1911. Ed ‘The Strangler’ Lewis wrestled here many times and Lou Thesz worked his ring magic from 1945–1963. Dory Funk Jr., Terry Funk and Harley Race carried the NWA title belt to Stu’s territory. Stars from around the world wrestled alongside iconic Canadian athletes. Stu emerged as the training and promoting powerhouse for most of the last century. This was the Hart Legacy, the special ingredient in the success of so many wrestlers for so many years that will be celebrated on Friday night.”

“For a long time I have wanted to travel the world to find guys that I thought my Grandfather, Bret, Owen, Davey Boy, guys who were hard to impress would be impressed by,” said Ted Hart. “The work ethic and integrity and dedication to a goal, a lot of the guys on this show take a chance for the love of the business and that is what our family stood for and my grandfather had the dungeon for. It was for going down there and turning yourself into a warrior, a machine, that was the place to do it. The more you pushed yourself the better result you would get.

“No one is looking for that any more. Everyone is gone or busy. Doing a show and going big or going home is what we went with here. We brought in the best guys we could find,” continued Hart. “You will wonder if gravity has changed from some of these guys because they are doing stuff that is death defying. This is the evolution of wrestling and guys from Mexico, Japan, America, Canada and England that we found like Stu did. Talent wills out anything. I guarantee it will be one of the best shows you have ever seen.”

The show will also feature legends in attendance like Leo Burke and The Great Gama, families of deceased wrestlers Bad News Allen and Bif Wellington, and former Stampede wrestlers Jason The Terrible and Jim “The Anvil” Neidhart in action.

Hart is excited to pay tribute to the history of wrestling in Calgary. “There is a lot of history on this show. I am a huge fan of Bif Wellington and Bad News Allen and am thrilled that they will be there. It is nice that people still care and that we can get the torch passed to us by their families and pay thanks that we didn’t forget and appreciate the sacrifice they made even though they aren’t here any more. Jason the Terrible is coming out of retirement to wrestle.”

Hart Legacy Wrestling will also feature the final Canadian independent appearance of El Generico, who is on the verge of signing a deal with WWE. Having the Canadian star on the show is another coup, Hart stated.

“I thought he has had the best matches consistently on the independent scene,” Hart said. “It is a blessing to have him on the show. He is awesome, if he signs great for him and it is a great feather in our cap to have a guy on our show that signs with WWE. We aren’t Vince [McMahon] and never are going to be Vince. I love WWE but I don’t fit their profile but that doesn’t mean we won’t have guys that will be relevant in the WWE machine.”

At the press conference Hart Legacy Wrestling announced that it will have three shows in February in Calgary, Edmonton and Medicine Hat featuring John Morrison. The company is committed to shows throughout the spring and negotiating with talent who want to appear in the building that to many holds the same reverence as the Dallas Sportatorium or the ECW Arena. Hart never got the chance to wrestle in front of a packed Pavilion crowd and is thrilled to return to the same building so many in his family made home.

“Bruce cut me out of that first Stampede show and replaced TJ Wilson and I. It is a big deal for me to wrestle in the Pavilion,” he admitted. “By the time I wrestled in the Pavilion in Stampede Wrestling I wrestled in front of 300 people because they had killed it with shows that weren’t good. This is different, trying to find all of those guys we used to watch videos of and get them to come up. I am a big fan of Pro Wrestling Guerrilla, it is so good but their building is too small. Dragon Gate and Evolve put on great shows. I always see something new and they always have great stuff and we want to bring that style to Calgary.” 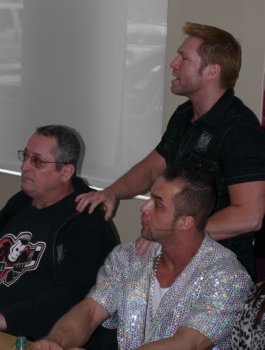 Also excited to wrestle at the Pavilion is “Hotshot” Johnny Devine, who wrestled in the building during the early days of Stampede Wrestling’s relaunch in 1999.

“I am totally jazzed! I am psyched, I am fired up because it is without a doubt my Mecca. That is where wrestling started for me. One day that is where wrestling will finish for me,” said Devine. “Obviously they are sparing no expense so the roster of talent is fantastic. We are not going to be disgusted watching the kid who flips my burgers take on the kid with the squeegee out on the street. We’ve got real wrestlers doing real wrestling in a real wrestling building. This is just another opportunity for me to prove why my name belongs next to some of the greats. It infuriates me a lot that it is never mentioned with a lot of them so I have a point to prove.”

Since leaving TNA in 2008, Devine has semi-retired and focused on his private life, including getting married. He is excited to return to the ring, and with the show being broadcast on internet pay per view, he is determined to show fans what they have been missing.

“I am not sure who I am working with yet. It doesn’t matter who it is, I have a statement to make. I guarantee any old fans of Johnny Devine are going to realize why they were fans in the past,” he vowed. “The Johnny Devine coming to do this is the one that was here before he left Calgary. That is a really different Devine than anybody has seen in a long time. I wasn’t allowed to be Johnny Devine most other places and anywhere I was it was small independent shows where I had no constraints or shackles. Since 2008 I haven’t been motivated to do anything else. I haven’t been motivated to prove anything to anybody because I’ve accomplished pretty much everything I wanted to. This is different, it has been a few years, I’ve leaned out and improved my health, life and focus and now I am going to prove why my name still belongs up there and should have been mentioned as one of the backbones of the second coming of Stampede because literally I carried it for a good portion of time.”

Devine is excited to see Kevin Nash and Konnan who he worked with in TNA. Whether ordering the internet pay per view or attending in person, he guaranteed a memorable night.

“I am so excited to see big Kev and Konnan. That is what a good show needs to be, much like a circus it’s got to have lions, tigers, bears, high wire acts and clowns,” he explained. “There needs to be variety and you can’t ignore the past and expound on the future without living in the present of knowledge that it takes the past to create the future. If you can combine the two you have a hybrid innovative product which is exactly what we are going to give to the people. We have athletes that can do things no one else can do and see things that will blow your mind. Old school wrestling fans? We have exactly that. This isn’t a promo for half an hour — it is Hart Legacy Wrestling. The names that go with that are all that is needed to be said. Show up on Friday, every single penny of your ticket price will be earned.”