MONTREAL – For the first time in its history, a SHIMMER title switched hands outside of the company’s Berwyn, Illinois headquarters, with tag titles returning to previous champions Saturday night at Montreal’s NCW Centre, during the ninth edition of Femmes Fatales.

Last week, a stipulation was added to an already confirmed match between the Canadian Ninjaz (Portia Perez and Nicole Matthews) and the team of Sweet Cherrie and Cherry Bomb. The new stip was quite simple as the winners of the match would become the number one contenders for the SHIMMER tag team championship and would get a title shot on November 3rd in Montreal for Femmes Fatales X.

The Ninjaz won the match, but after the intermission, they came back to the ring asking for their title shot now, stating they didn’t want to wait and come back to Montreal in four months.

Since the SHIMMER tag champions, Courtney Rush and Sara Del Rey, were at the show, though not scheduled to team, they called them out. Rush came to the ring and was somehow willing to do it but then Del Rey came out too and didn’t agree with her partner.

For the benefit of our readers, it’s important to point out that at the last SHIMMER taping in October, Del Rey was looking for a partner to go against then-champions Ayako Hamada and Ayumi Kurihara. Rush was the only one who really wanted to team up with “The Queen of Wrestling” Del Rey, even though the latter tried so hard finding someone else. 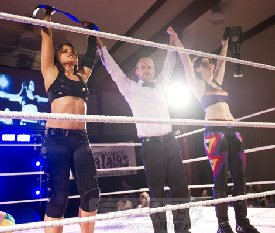 Del Rey and Rush ended up beating the two Joshis and against all odds, became the new SHIMMER tag team champions.

Back to last night, Del Rey preferred to give away her title than to team with Rush again, but this is something SHIMMER’s official and head referee Bryce Remsburg didn’t allow her to do. Instead, he declared the match official.

After a few minutes, as Rush was trying to tag out, Del Rey just walked out of her partner, leaving Rush alone with the Ninjaz. Minutes later, SHIMMER had new tag team titlists, the second time Matthews and Perez were champions.

That also confirms that the new champions will probably brag about being the first two-time SHIMMER tag team champions for a long time.

Another match highly expected by fans was the one between LuFisto and Mercedes Martinez.

After Martinez attacked Kalamity at the last Femmes Fatales show in March, LuFisto and Martinez had a wild brawl. At the last WSU show in Deer Park, New York, on June 16th, LuFisto showed up in a casket in the main event, a Casket Match between WSU champion Jessicka Havok and Martinez and attacked the latter. This cross-promotion feud cost Martinez her opportunity to win back the title she once held for three years.

Winning wasn’t a priority for the two combatants last night as they fought for pride more than anything else. The two of them didn’t even go for a pin the entire match. They went on the outside a few times and at one point, LuFisto did an incredible top rope moonsault to the outside. Finally, they just got both counted out.

But it didn’t matter to them.

The match was over, but certainly not the fight. They continued to brawl until security and officials came to pull them apart.

Right after this match, Femmes Fatales’ promoter Stephane Bruyere came to the ring to make some announcements, but Martinez came back saying she wanted LuFisto again and now. As she was about to hit him, LuFisto went right back to the ring as well. The two argued and Martinez just punched Bruyere before starting to brawl one more time with LuFisto. Security and officials wasn’t enough that time and it took half of the roster to separate the two.

Bruyere then announced that if the two wanted each other that bad, on November 3rd, for Femmes Fatales X, they would be fighting one more time, this time in a Steel Cage Match.

“What Mercedes Martinez did to Stephane Bruyere was unacceptable. She asked to fight with me again and took an unnecessary shot at him. But you know what? She should be careful what she wishes for cause she might just get it. On November 3rd, cage match, she’ll have nowhere to run,” LuFisto told SLAM! Wrestling after the show.

Femmes Fatales’ place in women wrestling is taking a very good turn. They now have a talent exchange with WSU and also have a very good working relationship with SHIMMER as well. Even though there’s no real bad blood between what everybody refers to as the two best women promotions in the U.S., Canada’s Femmes Fatales becomes more and more the gel that glues women wrestling in North America. On the eve of their 10th show, November 3rd and its first double taping, it is quite an accomplishment.