A review of a DVD focused on a particular PPV event, such as Wrestlemania XXVIII, is somewhat difficult due to the fact that the main selling point is the event itself, which has been thoroughly reviewed already. As chronicled in SLAM! Wrestling’s review of Wrestlemania XXVIII, the card was extremely strong. So instead of the show itself, I will focus on the extras.

Included on a separate disc is the 2012 WWE Hall of Fame Induction ceremony. Unlike the shortened one-hour version shown on broadcast television, what is included here is the complete two-hour and 56-minute WWE Hall of Fame Induction Ceremony. The Class of 2012 was excellent, with some wonderful speeches by John Bradshaw Layfield, Ron Simmons, DX, Christian and Edge. 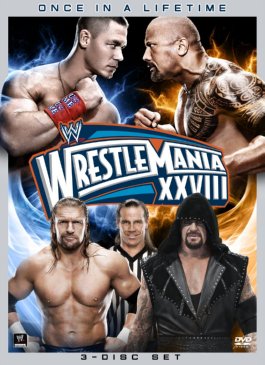 It was probably the orations by the members of the Four Horsemen, JJ Dillon, Ric Flair, Barry Windham, Tully Blanchard, and Arn Anderson that were the highlight of the ceremony. During their respective speeches, what made each member of the Four Horsemen special became readily apparent. During their speeches, and the induction speech by Dusty Rhodes, the fact that Ole Anderson wasn’t included is alluded to, but it still feels strange that none of the other members ever mention him by name.

While watching the Hall of Fame ceremony there was one fact that greatly surprised me, which was that it appeared that The Rock was not present at the ceremony. Typically when a wrestler was mentioned during a speech the camera would pan over to show them on the screen. Yet despite The Rock being mentioned several times he is never shown. Considering that the Hall of Fame ceremony was the night before Wrestlemania XXVIII and a member of his extended family, Yokozuna, was one of the inductees, it seems odd that The Rock apparently wasn’t there.

And we all know The Rock was in town at least. There was no getting away from “The Once in a Lifetime Match” contested by John Cena and The Rock. No doubt that match will be counted on for DVD sales, but it was the rest of the main bouts — CM Punk versus Chris Jericho for the WWE Championship and the End of an Era Hell in the Cell match between The Undertaker and Triple H that carried the show. The undercard was also fairly solid with one notable exception, the far too short World Heavyweight Championship match involving Daniel Bryan and Sheamus, which still seems disrespectful to both wrestlers and the World Heavyweight Championship title.

The special features provided on the DVD version are somewhat sparse and include the WWE Tag Team Championship Triple Threat Match between Primo and Epico, Justin Gabriel and Tyson Kydd, and the Usos just before the Wrestlemania XXVIII event; the Wrestlemania XXVIII Press Conference; and a vignette on the history leading up to the Triple H and The Undertaker match. The Blu-Ray special features includes all of the aforementioned DVD ones, plus the February 20th Monday Night Raw confrontation between Triple H and The Undertaker, The Rock’s February 27th return to Portland, John Cena’s March 5th return home, and the March 26th verbal clash between John Cena and The Rock on Monday Night Raw.

Compared to some of the special features found on past WWE releases these seem somewhat inadequate. For the future the WWE might want to consider having guest commentary on one of the featured matches as was done for the Wrestlemania XV and 2000 DVDs. The guest commentaries that were done for those two Wrestlemanias brought forth some different perspectives and insights to the respective matches, plus they were a lot of fun. The WWE could also look at perhaps providing some past matches involving some of the featured participants and Hall of Famers as was done on several past Wrestlemania DVD releases. Additionally, a feature showing the behind the scenes preparation for a wrestler who is part of a match at Wrestlemania XXVIII would have been interesting. Lastly, to give more value, the WWE should really have included as part of the overall package a digital activation code so that purchasers of either the Wrestlemania XXVIII DVD or Blu-Ray could have downloaded and placed digital copies of the event for viewing on their mobile devices. With almost every major motion picture company offering digital copies as part of the purchasing price for their DVD and Blu-Ray releases it’s really odd that the WWE has failed to embrace this mainstream trend.

Overall for anyone who has a love for professional wrestling I would highly recommend purchasing the Wrestlemania XXVIII Blu-Ray for the 2012 Hall of Fame Induction Ceremony and the high-definition picture and sound. However, if you’re more of a casual viewer you may want to simply rent a copy — if you can still find a place to do that.