Growing up in Tennessee, there was always an allure surrounding Memphis Wrestling. Memphis Heat: The True Story of Memphis Wrasslin’ captures some of the allure in a fantastic documentary.

Released earlier this year by Off the Top Rope Productions, the film wastes no time in setting the tone.

“They don’t even know what heat is today here man,” explains Bill Dundee at the very beginning regarding current wrestlers experiencing heel heat. “They don’t walk outside, and they have flattened your four tires and flung a brick through your window. They don’t know what heat is. They don’t try to cut you with a knife. I’ve been cut twice with a knife … heat is when they don’t like you for what you do to your opponent.” 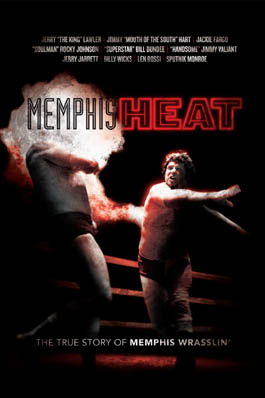 Directed by Chad Schaffler, the documentary begins with describing professional wrestling’s roots within the carnival circuit. Several wrestling legends, including Len Rossi, Billy Wicks and the late Sputnik Monroe, detail the early beginnings of the sport.

The headquarters of Memphis Wrestling, also referred to as the Tennessee territory, was actually located in Nashville. Nick Gulas and Roy Welch were the promoters at the time. Christine Jarrett started working for Gulas and Welch as a ticket seller. Her son, Jerry Jarrett, began promoting spot shows at the age of 14.

The Tennessee territory had a reputation of low payoffs for wrestlers, especially when it came to Nick Gulas.

“I have literally seen him pay everybody forty dollars, and then come back and look at it and see how much profit he had left,” Jarrett describes in the film. “And then take ten dollars off of the boys’ pay. I’d say, ‘Nick, hell it cost us fifty dollars to get there.’ He said, ‘Well, it ain’t my fault. They should have drawn more.'”

Jackie Fargo and the infamous Fargo strut are also highlighted in the film. One individual who idolized Jackie Fargo was a young Jerry Lawler. Lawler sat under the learning tree of Fargo and later became synonymous with Memphis Wrestling. Considering WWE has never released a Jerry Lawler retrospective DVD, Memphis Heat contains a lot of early archival footage of Lawler in action most newer fans have likely never seen.

The travel was grueling to say the least. As depicted in the documentary, the weekly travel schedule was:

Jerry Jarrett’s split from Gulas is also well documented in the film. Once Jarrett was able to get wrestling on WMC-TV 5 in Memphis, the ratings and attendance soared, cementing Jarrett’s company as the victor.

Several matches are highlighted including the Tupelo Concession Stand Brawl and the Empty Arena match between Terry Funk and Lawler. The documentary rounds out with detailing Andy Kaufman’s involvement in the organization and Jimmy Hart’s departure for the WWF.

Long-time Memphis Wrestling mainstays from the era are interviewed for the documentary including Monroe and Guy Coffey shortly before their passing.

Unfortunately, most of the early Memphis Wrestling master tapes were destroyed, taped over or have simply vanished. Most of what remains is scattered among many individuals. Furthermore, who exactly legally owns the distribution rights is a puzzle and story unto itself. As a result, what footage remains is of lower quality such as tape dubs. A great deal of Memphis Wrestling has found its way onto YouTube and other video sharing websites as well.

Therefore, I highly recommend Memphis Heat: The True Story of Memphis Wrasslin’ to newer fans wanting to learn about the mystique of Memphis Wrestling as well as fans who want to revisit a bygone era.

In retrospect, the Tennessee territory was a place where angles and gimmicks would go over that would not be able to be successful in any other territory. The territory was also a place where the proverbial who’s who received an early break such as The Rock as Flex Kavana, The Undertaker as the Master of Pain, Sting, and Jim Cornette just to name a few.

Is there a way to pinpoint what made Memphis Wrestling a success? I will let Jerry Lawler have the last word.

“So many pieces of the puzzle all came together at once maybe just by coincidence, but it happened. And it created such a ball that started rolling, and it was almost impossible to stop.”

Ryan Nation has fond memories of watching Memphis Wrestling while growing up in Tennessee. He imagines the payoffs on the Tennessee indy scene have not improved. E-mail him at ryan.nation@gmail.com.