As we get close to WWE ’12‘s release, we here at SLAM! Wrestling can’t help but get excited. After all, many of us aren’t just viewers, we’re gamers too.

You need not look much further than our anticipation for another game which came out from WWE All-Stars. Partnering again with THQ, WWE took a true fantasy perspective on the title, hulking up (pardon the pun) superstars of the past and present and pitting them in a more cartoonish, Street Fighter-style competition with exaggerated moves and combos. 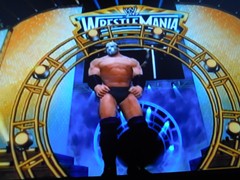 For the review we had three consoles going — Jon Waldman on Xbox, Marshall Ward on Wii and Colin Hunter on PS3. Here are our thoughts on this game which has maintained a pretty steady position in the gaming market.

Jon – It may have just been the 360, but I found the controls to be extremely frustrating at times. Just when I thought I had a move figured out, it didn’t seem to work on next attempt. I don’t mind button smashes, but this was beyond anything I could tolerate. For a guy who doesn’t like to have to read instruction manuals, this was frustrating beyond anything reasonable. Had it not been for the competitive fire that made me push through to complete one of the stories I would’ve let this one collect dust. 1.5/5 stars

Marshall – Based primarily on timing, grappling and reversals, the gameplay is consistently smooth, regardless of whether you’re simply pummelling your opponent, or executing a back-breaking Texas Clover Leaf. Blocking is effective, and reversals require split-second timing, but can result in some of the craziest, over-the-top action ever seen in a wrestling game. A few glitches and strange happenings along the way (Andre the Giant disappeared into the crowd during one match, and never returned) but an otherwise incredibly easy-to-pick-up game that is both fluid and fun. 4.5/5 stars

Colin – There are two ways to play this game: 1. Pick up the controller, mash buttons randomly, and enjoy the resulting mayhem; 2. Pick up the controller, mash buttons semi-strategically, and enjoy the resulting mayhem. Either way, you’ll be mashing buttons and having fun. Even once you’ve learned the mechanics — grappling, striking, diving, reversing and finishing — the game has a charming simplicity that makes for an instantly enjoyable and surprisingly addictive experience. 4.5/5 stars

Jon – The game is meant to be a cartoon and in that respect THQ passes with flying colours. It certainly harkened back to a game like Ultima Fighter in that respect. As always with THQ games though, the repetitive commentary kills so much of the game enjoyment. Muting the game is always an option though, so I won’t complain too much. 3.5/5 stars

Marshall – When performing a signature move or finisher, character’s movements are highlighted by brilliant streams of colour, illustrating the punishing impact as time slows down. Sound is decent, especially when Eddie Guerrero executes the “The Gori Special,” as vertebrae crunch and bones crackle. Like previous THQ wrestling games, though, there’s plenty of repetition in the commentary, along with several glitches (the announcers sometimes call a rather different match than the one unfolding onscreen). 4/5 stars

Colin – Visually, this is a drastic departure from the more realistic Smackdown vs. Raw series, though it bears some similarities to THQ’s fun-but-flawed 2009 title Legends of WrestleMania. Musculatures are inflated, brows are Cro-Magnon and finishing moves are seismically powerful. The laws of physics no longer apply, allowing Rey Mysterio to toss Andre the Giant around like a ragdoll, and The Big Show to unleash 15-foot leaping chokeslams. Jerry Lawler and Jim Ross provide commentary, spouting most of the usual observations but throwing in some interesting historical tidbits for good measure. 4/5 stars

Jon – To describe the choices as limited would be generous. I’m guessing the character build enhancements had a lot to do with this, lest the game be slowed. What WWE had to work with though was pretty extensive, even going to far as to include Hulk Hogan on the roster. You can always ask for more but I’m fairly happy with who was included on the Legends side. 3.5/5 stars

Marshall – The roster of 30 wrestlers seems a bit thin, given the split between contemporary superstars and classic legends — not to mention lack of realism. It would have made for a great opportunity to finally include Hornswoggle as a playable character. From the past, they could have dug deeper back into the ’70s — Bruno Sammartino, Killer Kowalski, or Superstar Billy Graham would have made formidable opponents against Rey Mysterio, John Morrison or Big Show. 3.5/5 stars

Colin – Given that realism has been thrown out the window, without the need for voice-overs or true-to-life motion-capture, I don’t see why THQ kept the roster relatively small. Without drastically more effort, they could have included a who’s-who of wrestling, including old-old-school legends and obscure ham-and-eggers. Instead, we’re given a couple-dozen stars of the ’80s, the Attitude Era and present-day WWE. 3.5/5 stars

Jon – As someone who devotes a decent amount of time to CAWs on regular WWE games, I was a bit miffed at the limitations here. Throwing realism out the window isn’t a big deal, but I wasn’t inspired to create the dozen or so wrestlers I’m used to making each year. 3/5 stars

Marshall – In any of the THQ games, creating a wrestler has always been a tedious exercise. I’ve struggled for eternities to accurately capture the face-paint and hairstyles for characters like Iceman Parsons, The Great Kabuki and The Missing Link. Having said that, WWE All Stars sets the tone by forsaking realism for fun, while still offering instantly recognizable characters whose biceps bulge and pecs hyperinflate — which makes for a lot more room for imagination and interpretation in CAW. 4/5 stars

Colin – I’ve never had much patience for create-a-wrestler modes, since I invariably get fed up with fine-tuning things like jaw-width and belly-girth. But I was pleasantly surprised by the straightforward, easy-to-navigate system in WWE All-Stars, particularly because it contains a number of templates that help you bypass a lot of the time-consuming minutiae. Thanks to this template system, I was able to easily create The Yeti — the preposterous eight-foot-tall mummy character who attacked Hulk Hogan at WCW’s 1995 Halloween Havoc fiasco. 4/5 stars 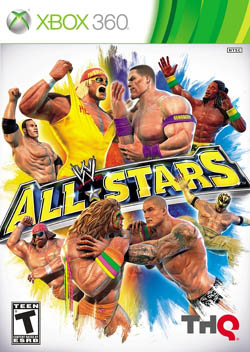 Jon – Here’s where WWE All-Stars worked for me. It was simple shut up-and-wrestle mechanisms that took me back to my salad days in Playland. That’s all fighting games are supposed to be. I don’t need to walk through hall after hall looking for one single person to talk to just to advance my story. Hmm, maybe the WWE writing staff should take this as a note in general. 4.5/5 stars

Marshall – Path of Champions is the closest thing here to a career mode, and though it lacks depth, this more easy-to-complete mode is lots of fun. The videos between matches are entertaining, and tie in nicely with the exhilarating presentation of the game. Three-way and four-way matches can be challenging and may require a retry, along with the steel cage match (escaping requires some precise timing). 4/5 stars

Colin – Whereas the Smackdown vs. Raw series offers immersive story modes and nerdy be-the-promoter simulation capabilities, WWE All-Stars errs on the side of simplicity. The Fantasy Warfare mode is a treat for long-time fans, with beautifully edited video vignettes hyping the greatest-matches-that-never-were. It is up to you, the gamer, to determine who is “The Coldest Snake” (Jake Roberts vs. Randy Orton) or who is the real Excellence of Execution (Edge vs. Bret Hart). While the vignettes are entertaining the first time through, there’s very little replay value to this mode. 3.5/5 stars

Jon – While the simplicity of fighting was alluring at first, it wasn’t enough to sustain my interest. I’ve got too many of those sorts of titles on my shelf already, and Smackdown vs. Raw games cover my wrestling fix better than WWE All-Stars will. I applaud THQ for wanting to do something different, but this just didn’t jive with me. 2.5/5 stars

Marshall – This bombastic approach to a wrestling game, accompanied by elaborate videos that use WWE’s signature style of dramatic storytelling and voiceovers, makes for a refreshingly enjoyable package. With a fantastic sense of fun and freedom, the creators made this competitive fighting game one of the very best available on the Wii. Nice pacing during the matches, along with precision, strategy, and a smattering of exclusive moves for every wrestler, should satisfy even hardcore wrestling gamers. And though I believe nothing can top the 1985 Technos arcade classic Exciting Hour, WWE All-Stars gets two masking-taped thumbs up. 4/5 stars

Colin – What this game lacks in depth, it makes up for with simple, colourful gameplay and enough high-impact theatrics to appease wrestling fans and Tekken gurus alike. It’s certainly not the greatest wrestling game ever made (in my opinion, that honour still belongs to Giant Gram, the All-Japan Pro Wrestling game that was worth buying a Japanese Dreamcast to play), but it’s a refreshing, addictive twist on the genre. As someone who fondly remembers pumping quarters into the arcade version of Street Fighter II, I’m happy to have this button-mashing brawler as part of my PS3 collection. 4/5 stars