For months, Trish Stratus has been infusing the social networking world with “Stratusphere Living: — tips about her healthy approach to living. Followers sharing their own workout accomplishments and healthy eating habits have been tagging their tweets with #stratusphereliving hopeful to get a notice or even a chance of a retweet by Trish, their virtual nuTRISHional coach.

This weekend, what was virtual becomes real, as the former WWE Women’s champion officially launches her fitness lifestyle brand, Stratusphere. 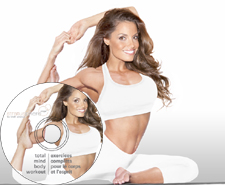 To kick off what she has dubbed her “Stratusphere Tour,” Trish teams up with one of her retail partners, London Drugs, the first of several retailers carrying her new product line. Fans will get a chance to meet and greet with Trish appears at two locations in the Greater Vancouver area this Saturday.

The launch comes roughly a year after Stratus began developing the product line, following on the heels of her CTV Travel show and yoga studio (both appropriately named Stratusphere). The idea to launch the brand to a broader audience was, thus a natural flow.

“My message was basically to spread the word of yoga and health and fitness,” she told SLAM! Wrestling earlier this week.

Simultaneously, Stratus, who retired from wrestling in 2006 but has remained close to WWE ever since with one-off appearances, a brief run leading up to and including WrestleMania XXVII and a spot on the revived Tough Enough series as a trainer, was embarking on her movie career with her first film, Bounty Hunters (previously titled Bail Enforcers). For the role, Trish found that she wanted to tone up her look and began creating a hybrid workout combining strength training with yoga.

“I started thinking about what weight and resistance training I could do while doing these poses,” she explained, “and my body really responded. I got more toned and lean in a short amount of time. It worked for the role and the class took off in my studio.”

From there, the product ideas were truly flowing. Stratus designed a prototype of a glove that could maximize this new yoga style she had created. She worked with her partners at Homedics Canada to develop her “FitGloves,” which have skid-free pads on the palm to prevent slipping during poses such as downward dog. And, to up the ante of the workout, she added one-pound weights to the gloves to intensify the resistance training movements.

An example of the care Trish has taken to add her personal touch to every product, is the creation of her yoga fitness kit, which includes a yoga mat, her Stratusphere Yoga DVD and nu-Trish-ion journal (that wasn’t a typo, that’s what it’s actually called, not unexpected from the pun-loving Trish). Knowing firsthand the importance of not only working out but eating healthy, Trish designed this kit to kick start the journey for those looking to get healthy and fit.

London Drugs, one of several Canadian retailers carrying Stratusphere Living, will be hosting two autograph signings with Trish. First, she will be in Langley (20202-66th Avenue location) from 12-1pm and then in Burnaby (400-4567 Lougheed Hwy.) from 3 to 4pm.

The willingness by Stratus to come to store launches, she admits, came as a surprise to her partners, but perhaps not so for wrestling fans who have come to know that public appearances are a part of life.

“That was something that was instilled in me from WWE,” she reflected. “They would always create these opportunities, and I do believe that, 10 years later, this is why I still have the same fan support — because WWE really made a point of getting superstars out there and interacting with your fans, giving you the opportunity to come out and meet them.

“When you’ve met someone, you’re happy to see them and see their success. You feel like you’re along for the ride.”

Thus, the step to come out and meet her fans for what will be the start of a Stratusphere Tour was second nature to Stratus.

“I’ve seen this on Twitter: the more you talk about something that you’re passionate about, not only do they (fans) see your passion, they say, ‘She’s passionate about it, I should give it a try,'” she says. “It’s the same with wrestling. If they saw that I was so excited about making it in this business and I’m giving it my everything, they’d say, ‘I’ll get behind her; I’ll support her.'”

The appearances for Trish out in B.C. will be a return for Trish who has not been in B.C. since touring through the province during the run of The Second City’s Next Comedy Legend.

As for memorable wrestling appearances in Vancouver and the surrounding area?

“I think I might have been been returning from an injury, so Vancouver was a great place to come back; there always much love from my fellow Canadians,” she said.

Of course, fans can expect that similar memories will be shared when Stratus continues on her tour to promote her new product line. She is, however, quick to point out to fans who come down that while she will be promoting the release of Stratusphere Living, including copies of her much anticipated workout DVD, Stratusphere Yoga, she will be more than happy to autograph any and all items fans bring in.

“I’m definitely cool to sign anything else anyone brings. That was a rule I wanted to put in place because I know how important it is. I love when people bring in a picture we took from before and they’ve been holding onto for years.”

The Stratusphere Living lineup makes way across the rest of Canada and will land on retailer shelves by the end of September. It will also be available online at www.trishstratus.com by October for those outside of Canada.