As one of the breakout stars of WWE’s latest season of Tough Enough, Jeremiah Riggs’ newfound fame hasn’t changed him. He still wakes up each morning at his home in Vicksburg, Miss., feeds his chickens and goes to work at a trucking company. And even though he went farther than many would’ve expected, finishing third, he’s not content.

“I’m thrilled, but I honestly think I should be in that finale,” Riggs told SLAM! Wrestling last week. “I’m not real happy with third place because the competitive side of me says, ‘If you’re not first, you’re last.’ I’d rather be holding that belt up at the end of the day.” 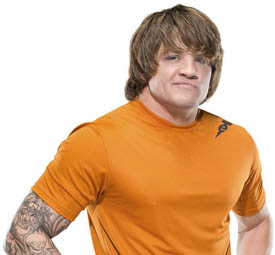 Even though Riggs was eliminated at the end of last week’s show, he still put forth a solid effort. Despite being called “as green as grass” over and over because he was a novice in the ring, he impressed show host “Stone Cold” Steve Austin so much with his natural athleticism and moxie that he was allowed to hand his ceremonial belt over rather than having it taken away from him.

“I knew I was walking into a world of unfamiliar things,” Riggs said. “I knew I had to bring my A game, there’s no doubt about it and that’s what I did. I looked to set the standard, even though I didn’t come from that business. And staying out of the bottom three like I did was really just a true testament to my skills and my willingness to go out there and make something happen.”

Riggs points to The Miz as someone he can look to and draw inspiration from. The Miz finished second during Tough Enough‘s 2004 run and went all the way from someone looked at as only a reality TV star to winning the WWE Championship in 2010 and headlining WrestleMania 27.

“Winning the show is great, but it’s not really even the beginning,” Riggs said. “Just because you win the show doesn’t mean you’re going to go on and have a great career or go in guns blazing.”

Riggs is a veteran reality show contestant. Having appeared on VH1’s Daisy of Love and Spike TV’s The Ultimate Fighter 7, Riggs decided to try his hand at professional wrestling and was cast as a member of WWE and USA Network’s reincarnation of Tough Enough. Despite entering the show as one of the least-experienced wrestlers, Riggs excelled, forming a sort of kinship with Austin and never appearing in his bottom three until he had to by default with just three people remaining.

“When you meet someone you have a lot in common with, or you’re a lot alike, or share a lot of interests, I think it’s easy for someone to like you or to really take you under their wing,” Riggs said. “With Stone Cold being Stone Cold, he’s a tough son of a gun. I really enjoyed being around him. I like watching him be on everybody’s ass, to be honest with you.”

Compared to the other reality shows Riggs was apart of, he said one thing made Tough Enough stand apart from the rest.

“With Tough Enough, it’s competition to the fullest, that’s what I like,” he said. “Day-in and and day-out trying to prove you’re No. 1 and not only that, you’re getting beat down doing it. No vacations, no nothing.”

With that comes mental toughness. Riggs was lauded by Austin for being one of the toughest competitors on the show. As he wasn’t a part of Austin’s now-famous “bottom three” until he had to be, all Riggs knew about it going in was what he heard from those who had experienced it. And after watching Austin run down so many contestants when he watched the show on TV, Riggs was greatly entertained.

“Some people get intimidated really easily,” he said. “For me watching it, I thought it was hilarious. It was a blast. I actually got to see what was said and see how things went. I always like watching people mentally break or just be real intimidated.”

Having to be mentally tough should’ve extended further than the training center and other various activities, Riggs said. He thought there should’ve been no communication allowed for the contestants, much like the case is on the UFC’s reality show The Ultimate Fighter.

“If you break because you miss your wife or kids or whatever, hey, pack your s— and go home,” he said.

“I’ve got a kid and a family and stuff that I have to take care of, but when you live this lifestyle, you know the sacrifices it takes and there ain’t no crying about it. I sure don’t carry no chip on my shoulder for doing what I love doing. I’ve got a whole family that looks up to me, so when I’m away from home doing what I need to do, I ain’t got time to worry about who’s doing what. I’m trying to do what I need to do.”

For now, it appears Riggs is going to give a professional wrestling career a go. He says he’s been in contact with WWE since the show ended and has been working on getting bigger after losing weight, “which sucked,” he noted, during filming. When it comes down to it, Riggs said he’d do Tough Enough again in a drop of a hat and he has some goals for himself going forward.

“I really want to do big things and help the business,” Riggs said. “There’s a lot of kids out there and if I can do anything to just help people (I would). I really believe you can do big things when you become a superstar like that. I believe I’m an entertainer and I have a big heart for kids. That is something I would definitely put my time into. One of my main goals is to get on that roster. That would be awesome. Get on the roster, do a WrestleMania, help some people out and be a special guest like John Morrison and The Miz on Tough Enough.”