LOS ANGELES – On May 27, 1989 my dad took my brother and I to our first WWF card at the Saddledome in Calgary. Wrestlers on that show included Tito Santana, The Barbarian with Mr. Fuji, Jim “The Anvil” Neidhart and “Rowdy” Roddy Piper. All five men were guests at WrestleReunion and being in attendance this weekend took me back to being that child in the second row watching my larger than life heroes in the ring. I never would have thought that someday there wouldn’t be a railing between us, and I would be shaking hands with those very men who I was in awe of 22 years ago. 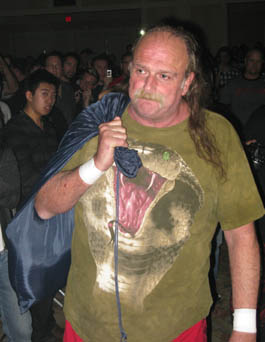 Jake “The Snake” Roberts heads to the ring for the Legends Battle Royale on Saturday night. Photos by Jason Clevett

This simple thing is what makes an event like WrestleReunion so wonderful. It brings our heroes to our level. It isn’t always a good thing, such as Neidhart threatening to bail on the autograph signing at three hours despite many more fans waiting in line to meet him, and agreeing to stay in exchange for not having to wrestle in the legends battle royal. The flip side of the coin was guys like Roddy Piper, Terry Funk and Paul Orndorff making time to engage everyone they met and let fans walk away with another level of respect for them.

Last year’s event for me was all about Jushin Liger and The Great Muta, the other guests were just icing on the cake. This year it was meeting Piper and Funk that initially made me go, “I need to go back.” When Jake Roberts was added a few weeks ago, it cemented that I had made the right choice. After having my photo taken with Roberts, I walked away and looked at the WrestleReunion photographer blinking to keep my eyes from welling up from the euphoria of having that dream realized. I didn’t think I would get the chance to meet him, and to do so meant more to me than even I realized.

I wanted to double-check the card I mentioned above and in searching realized that the first WWF match I ever saw live was The Blue Blazer (Owen Hart) vs. Bad News Brown. I also realized I attended both of their funerals. Many of the wrestlers are showing their age and some like Orndorff and “Superstar” Billy Graham are battling health issues. This could be the only time many of the fans get to meet the wrestlers, as who knows what the future holds for any of us?

Not surprisingly Sunday is a quieter day after the convention. There are still lots of fans around as the second set of VIP guests signed from 11 a.m.-2 p.m. Jake Roberts, Roddy Piper, SoCal Val and Traci Brooks did the last of the video promos with fans. In the afternoon, booths were being packed up and wrestlers and fans were heading to the airport. The Highspots staff who busted their asses all weekend to make the event work finally had a chance to reflect on the weekend.

“We learned that not everyone wants an all-inclusive package and going a la carte this year was a better idea. People got exactly what they wanted. We streamlined the check-in and photo and autograph process and everything was a lot more organized,” fan coordinator Amber Gertner said Sunday evening after the show. 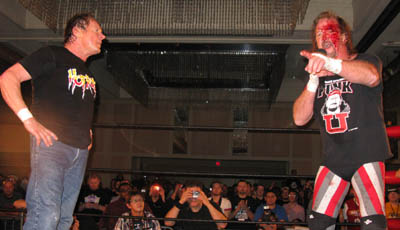 A bloody Terry Funk and Roddy Piper in the Legends Battle Royale.

Things seemed so smooth, most fans likely never realized what went into putting on the show. In addition to a high overhead in talent and flights, booking talent can be a challenge as well. Offers were made and declined to Hulk Hogan and Shawn Michaels. Other talents didn’t return contracts or had conflicts in their schedules. It was a year-long process to get to WrestleReunion 5, and will likely start again in the next two weeks planning next years events.

“It is extremely difficult in some cases, easy in others. We started a week after WrestleReunion 4 brainstorming. Ultimo Dragon was on the top of my list and we tried hard to get him but it didn’t work out this year,” Gertner explained. “It is a huge process and we waited sometimes months for contracts to come back. Some people didn’t work out but hopefully will in other years. We had a great talent lineup and more vendor guests than last year. I thought overall it went really well.”

With two incredibly successful consecutive years under their belts, the challenge becomes where WrestleReunion goes from here. Wrestlers from Bruno Sammartino to Rob Van Dam to Mr. Fuji have graced the last two events. Ring of Honor and Pro Wrestling Guerrilla offered off-the-charts shows. WrestleReunion has been confirmed for 2012, the question becomes how to top it. 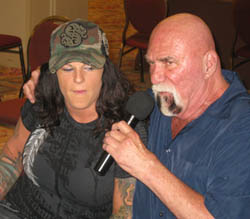 “I don’t know how to top it! The one thing I want to stress, I do think we topped last year it is apples and oranges and completely different,” Gertner said. “We outdid ourselves but in a different way. I hope that magic will happen again. Third time is a charm and I hope next year is completely amazing. I was pleased overall with the convention but would like to make it bigger and better next year.”

It is a truly amazing thing, these events. Even if you can’t make it to WrestleReunion, there are other conventions throughout North America as well as the annual Cauliflower Alley Club reunion that may be good choices. As we get older we sometimes forget the simple things that brought us joy as a child. Fan conventions are reminder of our innocence and happiness. If you’ve ever been a wrestling fan, you need to do this at least once in your lifetime.

Jason Clevett has had an amazing California vacation and is not looking forward to returning to a reality that includes Canadian winters. He would like to thank everyone at WrestleReunion for the opportunity – look for a ton of interviews in the upcoming weeks.