Legends shine at day 2 of WrestleReunion

LOS ANGELES – There could be no better way to start off day two of WrestleReunion than with “Rowdy” Roddy Piper. For the first time ever the Wrestlemania heel trio of Piper, “Mr. Wonderful” Paul Orndorff and “Cowboy” Bob Orton were available for a photo together. Fans seemed in awe as they climbed in the ring with three of the biggest names of the 1980s but were immediately made comfortable by the charismatic grapplers. Piper and Orton then moved to a replica Piper’s Pit set where Cowboy looked intimidating, still wearing his cast, and Piper posed in various photos from choking fans to holding a coconut.

Fresh off a win over the Kings of Wrestling at the previous night’s Ring of Honor show, Shelton Benjamin and Charlie Haas took photos and signed autographs along with Haas’ wife Jackie Gayda, who looked stunning. Many of the vendor guests made their first appearances Saturday including Torrie Wilson, Nick Mitchell, Harley Race and Christie Hemme. 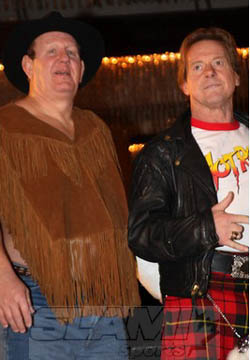 Continuing with their one-of-a-kind photo ops, WrestleReunion brought together the complete Hart Foundation for the first time. Bret “Hitman” Hart, Jim “The Anvil” Neidhart, Jimmy Hart and “Dangerous” Danny Davis posed in the ring with replica tag team titles. It was one of the most popular photo ops of the day. “Mean” Gene Okerlund, Tito Santana and Val Venis, and Vampiro also took photos in the morning while SoCal Val and Traci Brooks did poolside photos in bikinis. Brooks made a point of asking that I make it clear that SLAM! Wrestling’s Bob Kapur missed seeing her in a bikini.

The first VIP session also took place featuring half of the 25 WrestleReunion guests. Things ran much smoother then last year. VIP ticketholders lined up and had their photo taken with each WR guest and then lined up again for autographs. There was a lot less waiting around this year and more opportunity to escape and relax for a bit, or check out the other convention vendors. 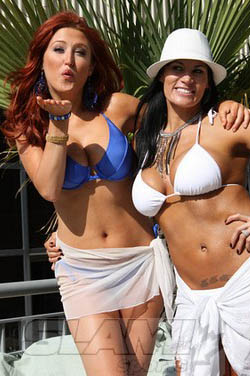 So Cal Val and Traci Brooks pose for the SLAM! Wrestling camera.

At 5:00 p.m. the VIP photos started again with Mr. Fuji and Mr. Saito and then Mr. Saito and Ken Patera. A long line of fans waited for Jake Roberts to enter the ring, joined by two large Burmese pythons. Roberts placed the snake around fans for a one of a kind photo, and tormented the Highspots camerawoman who was initially terrified of the reptile. To her credit, and with some help, she tackled her fear and posed with Roberts and the snakes. The Powers of Pain were the final deluxe photo op. The pair, bearing their trademark facepaint, look almost exactly as they did 20 years ago.

Pro Wrestling Guerrilla hosted a meet and greet prior to its show, and then the fans that filled the lobby of the LAX Hilton filed in. It can be a challenge to cram over 1,000 people into a hotel ballroom, and unfortunately the show started nearly 40 minutes late.

Up next was a lucha bout between longtime foes Rey Bucanero and Mr. Aguila, known as Essa Rios in WWE. The two brought their feud, which recently saw Aguila lose some hair to Bucanero, to PWG and put on exciting bout that saw them battle into the crowd and soar through the air. Aguila evened the score in the rematch, pinning Bucanero with a moonsault.

The bout between “The Hollywood Submission Machine” Joey Ryan and Shane Helms, with Amber O’Neal in his corner, took on an interesting dynamic with the crowd. Ryan is a hated heel in the promotion, but Helms was also booed by the crowd. After some solid mic work, the two put on a great match. Helms was booed as he connected with a chokeslam, but Ryan locked Helms in a submission to score the win. Fans chanted “don’t come back” at Helms, who responded that he wasn’t someone who got into the business and became a dick, he remembered what it was like to be on the other side of the rail. However the bottom line was “I’ve made millions and you ain’t made sh**.”

Low Ki, the former Kaval in WWE, made his PWG return and faced off with Davey Richards in a dream match. The two put on a wrestling clinic early on before kicking the hell out of each other. The sound of legs smacking flesh echoed through the ballroom. Richards blocked the Warriors Way doublestomp, tossing Ki off the top, but he missed a shooting star press. Ki connected with the Warrior’s Way to get the win. Despite it being a hell of a match, Richards disrespected Ki’s offer of a handshake by flipping him off and leaving he ring.

Emotions ran high as Jake “The Snake” Roberts stepped into the ring for the last time. Fans showed tremendous respect for Jake, who teared up as fans chanted his name. His hand-picked opponent Sinn Bodhi lead the crowd in chanting Jake’s name, but quickly attacked him at the start of the match. The bout itself was simple and sweet, with Roberts connecting with his trademark short-arm clothesline and the DDT to wrap up his career. Roberts again choked up, and simply shook his head at chants of “speech” before raising the python over his head and waiving goodbye.

After a short intermission the Legends Wrestle Royal took place. Mean Gene Okerlund introduced Paul Orndorff, Harley Race, The Iron Sheik and Mr. Saito, all convention guests who did not participate, then introduced the wrestlers in the match. Originally introduced at 30 second intervals which eventually became shorter as the match ran long. Danny Davis and Mike Graham started things off, and then Jimmy Hart joined in to double team Graham. Tito Santana was fourth and evened the odds. Barry O (Orton) was fifth, Barbarian was sixth and responsible for the first elimination of Graham. Los Angeles star Rock Riddle was seventh and took his time getting into the ring as the wrestlers battled inside.

Shane Douglas received a huge ECW chant as he entered and went after Davis. The Warlord entered as number 9, but didn’t get to team up with Powers of Pain partner The Barbarian, as Barb, Santana, and Orton were all eliminated. Warlord moved towards Jimmy Hart who leaped over the top rope and into the safe arms of The Iron Sheik outside. Chavo Guerrero entered as Davis was eliminated. Helms returned to the ring for the battle royal, teasing fans by playing his Hurricane music but instead coming out as himself. Douglas immediately targeted him in the corner as Bob Orton and his cast made his way to the ring.

TBS mainstay Cruel Connection was 13th and Mando Guerrero entered after him. The fans exploded as Terry Funk made his way to the ring and immediately started trading blows with Douglas, prompting another ECW chant. Savio Vega entered as Funk tossed Helms and Connection was eliminated. Moments later the familiar strains of bagpipes played. The crowd was so loud you couldn’t hear yourself think as Piper made his way to the ring, and became even louder as Funk stood in the ring calling him out. It was not be as both men were attacked by others in the ring. Riddle and Mando were eliminated as Vampiro, Sean Morley, with Ryan Shamrock in a nice ode to the past, and Tatanka made their way to the ring in short order.

The younger talents traded moves while Douglas continued to work on Funk. Vampiro eliminated Vega and Morley, and Chavo was eliminated by a Piper punch. It appeared that the final four was Douglas, Vampiro, Piper and Funk. Vampiro and Douglas teamed up on the icons, and by this point Douglas had used a chain to bust Funk open. Tatanka, who had been tossed through the ropes to the floor earlier, made the save but was eliminated. Douglas and Vampiro ended up at odds, which resulted in their elimination. Just when you thought that the fans could not get louder, they did as two of the craziest, loved wrestlers in history squared off for the first time.

Funk tried to take a break and pray, trying to convince Piper to bow his head as he prayed for the wrestlers who were up in heaven, for everyone to make it safe home … adding “Lord, please let me… win” before nailing Piper with the microphone. A bloody Funk dragged Piper outside the ring, blasting him repeatedly with the microphone and trying to get Piper to admit Funk was the better man. “This is the real ECW, you pig!” he cried as he tossed Piper back into the ring. The two battled back and forth with punches and Piper tossed Funk over the top to the apron. Funk held on for dear life but Piper kept punching until he fell to the floor. An outraged Funk tossed chairs in the ring and was held back from trying to return. If seeing Jake Roberts’ retirement wasn’t enough, watching a 66-year-old Terry Funk and 46-year-old Roddy Piper prove they can still have a crowd on their feet screaming truly made for a memorable evening.

The night was not over yet. Chris Hero and Kevin Steen kept the energy high with a hard-hitting, amazing match. Both men barely kicked out high impact moves before Hero finally put Steen down with a roaring forearm. A four-team tag match between The Cutler Brothers, The Fighting Taylor Boys, RockNES Monsters and The Young Bucks (TNA’s Generation Me) was too fast paced to try and describe, but Rockness walked out victorious.

It was nearing 1 a.m. when PWG champion Claudio Castignoli made his way to the ring to face El Generico. Unfortunately this meant that a lot of fans had left, leaving the rabid PWG diehards who somehow were still into the show some four hours later. It speaks to the talent of both men that they were able to keep the audience’s attention through another great match. Claudio worked on Generico’s leg the entire match, which prevented Generico from hitting some moves. Claudio tied up Generico in a leg submission for the win.

While the night did run long, capping off a hectic day, one couldn’t complain. WrestleReunion is about paying tribute to the history of the business, and seeing Roberts retire and Piper vs. Funk made a lasting memory that those in attendance will cherish their entire lives.