Gabe Sapolsky, the booker behind the Dragon Gate USA promotion, debuting this weekend in Ontario, has to take on another role on occasion: pitchman.

As the public face for a company based in Japan, running only a dozen shows a year in North America, Sapolsky finds himself explaining about the product as much as he does hyping the shows he has meticulously planned out.

Add to that his similar role with the Evolve promotion, based in the Northeast, and he can have busy days. 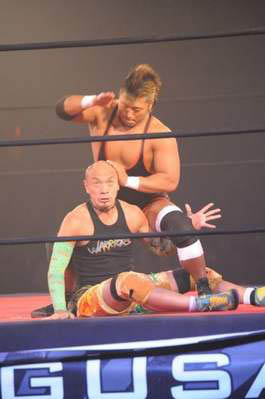 Fortunately, one little headache isn’t his responsibility — getting visas for the Japanese talent to perform in North America. That is handled by Dragon Gate USA president Satoshi Oji, and in the case of the two shows this weekend — Friday in Windsor, and Saturday in Mississauga — Scott D’Amore lent a hand.

In fact, D’Amore did more than just help out with the paperwork, said Sapolsky.

“I’ve always admired and respected everything he’s done. He was a guy I always wanted to work with,” admitted Sapolsky. “When the idea came up for Dragon Gate USA to come to Canada, he was the first guy I called. He was very receptive to the idea, and wanted to partner with us. It just made sense — Scott knows what he’s doing. He’s been a tremendous help with these shows; I mean, he’s making them happen.”

As a key figure behind the expanding Maximum Pro Wrestling company, as well as one of the most-respected trainers around, D’Amore gets exposure through the partnership, both for his promotion and for his students and loyal acolytes.

“It’s a win-win for everybody because we get to book his guys, who are good talents,” said Sapolsky. “They also help with the local fans who are already familiar with them. In return, his guys get seen by Dragon Gate and who knows what that can lead to. And they get kind of exposed to this new audience too, on the Dragon Gate DVDs and everything. That benefits both sides.”

Sapolsky explained what fans could expect at a Dragon Gate USA show.

“We like to say we’re the premium product in pro wrestling. We back that up by, number one, the in-ring. This isn’t like an indy show. We literally have the best talent from Japan coming over here, and that’s the backbone of our roster,” he said.

“For these Canadian shows, we have nine of the very best wrestlers, most athletic wrestlers in Japan coming to Canada. At the same time, because of the touring schedule in Japan, there’s not frequent shows. So these will be the only time this year that Dragon Gate USA will be in Windsor and Toronto. If things go well, we’ll come back next year. This isn’t the type of thing where we’re back in these towns three months later or four months later with the same exact crew of wrestlers that you’ve seen for the last four, five years.”

It is obvious that Sapolsky is a fan as much as an employee of the company.

“When it comes to the in-ring, you can’t touch these guys. They’re absolutely amazing. They’re innovative, they’re athletic, they do incredible things, they’re the cream of the crop at the top of the industry,” he raved.

He stressed these are not WWE and TNA castoffs.

“These are the most cutting edge, athletic, innovative wrestlers of Japan coming to Canada for one-time only this year,” he said. “Any of them are capable of being in any promotion in the world that they want on a wrestling ability level, on a star power level, on a charisma level. The only thing they don’t have is there’s a little bit of a language barrier.”

The action in WWE and Dragon Gate is comparable, Sapolsky said. “This is where Evan Bourne came from before he had to tone down everything that he’s doing in WWE. If you like that kind of style, like what Rey Mysterio is doing, you’re going to love what these guys are doing because they take it to the next level — and they don’t have to tone it down for WWE.” 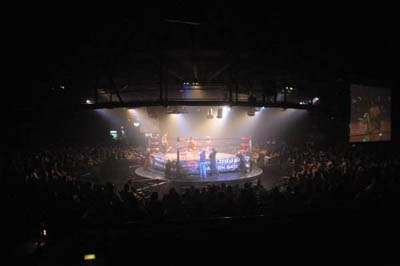 The setup for Dragon Gate USA in Phoenix.

The Dragon Gate experience is about more than just the fabulous action, he said. There are collector tickets, a meet and greet with the stars before the show, and DVDs packed with extras.

“Every aspect of our product, we try to make as high end as possible, and as premium as possible,” he said. “We’re like that really fine restaurant that’s in a particular city. The goal isn’t to be McDonald’s and serve one billion; the goal is to be that super-great restaurant that is five stars.”

The Windsor show, at the Windsor Armoury (37 University Avenue East), will be taping for a future DVD release. The Toronto-area show at the International Centre (6900 Airport Road Hall 4 in Mississauga) will be taped for PPV, and will be released later on DVD.

Sapolsky said ticket sales were “positive” but he was realistic as well. “It’s always a struggle to sell tickets. That’s the day and age we’re in right now — no one is knocking them dead at the box office. But everyone who comes to our shows always have a great time. We have nice, tight shows. It’s about six, seven matches on the main show. There’s no filler. Pretty much our goal is to put on six main event-type matches, quality matches, have a nice tight show, you’re not going to be there for five hours or four hours.”

“We’re not bringing the same show you’re going to see anywhere else,” he stressed. “If you want to see nine of the best wrestlers from Dragon Gate, and on top of it, we have some of the best American talent going in Mike Quackenbush and Jigsaw, who are as good as any tag team on the planet right now, Jimmy Jacobs. Then we fill in the bonus card with other talent that’s really upcoming. You get your money’s worth.”

Other ticket deals, including “Ticket Packs” for small group purchases can get fans in for as little as $15.

Dragon Gate USA debuted in July 2009, and Sapolsky was asked whether the promotion has come close to meeting business expectations.

“Definitely. We’ve been very happy,” he said. “The best thing has been the DVD sales. We were nervous going in that the DVD market wasn’t what it used to be because of torrents and how easy it is to download stuff.”

Compared to his previous job booking Ring of Honor, Dragon Gate USA is a little more anything goes for Sapolsky.

“The one big advantage we have too is we don’t have to hold back. We’re only doing about 12 shows a year over here, so every show is a major show for us,” he said. “It’s not like when I was booking ROH, I was booking four shows a month, so you’d have to sit there and say, ‘Well, we can’t do this on this show, and we can’t do that on that show; we have to stretch this out, and we have to do 20 rematches, because there’s no way for us to fill up four shows a month and make them all DVD purchase worthy.’