EDITORS NOTE: Wrestling reporters do, in fact, have girlfriends and wives. With TNA making the decision to run their Against All Odds event on Valentine’s Day, the significant others of the SLAM! Wrestling staff put their foot down. With a “no wrestling allowed” edict in place, The Fight Network’s John Pollock takes one for the team with the following report.

The show starts off cold with Ric Flair walking into the building furious and tells Christy Hemme that he hates Eric Bischoff for making himself the referee in the main event tonight and won’t allow Bischoff to screw with Styles tonight. Flair states that ‘I’m like a God around here’.

The don’t waste anytime as we start off the show with Desmond Wolfe Vs The Pope in the first quarter final match of the Eight Card Stud Tournament.

Good match to start off the show with a good back and forth between the two. The Pope gets the win with the D’Angelo Dinero Express in the corner to the back of Wolfe. Pope’s character is getting over very well and this match showcased Pope really well.

Ric Flair is backstage in Bischoff’s office and states that Flair is ‘God’ and anything concerning A.J Styles has to go through him. Bischoff states that Flair is worried because there is an official that he cannot buy. This was a great segment with these two and I have a feeling Flair is going to be the star of this show.

Hernandez Vs Matt Morgan is next in another quarter final match

The crowd was dead for this match – no interest in these two outside of a delayed vertical suplex by Hernandez, who the crowd was more into. Morgan played subtle heel and they teased a countout to Hernandez, who was selling the left shoulder but Morgan said he didn’t want to win like that and then pinned Hernandez a minute later by hooking the tights after he rammed the injured shoulder into the post. Hernandez was upset after the match and walked out – great slow, subtle burn.

We get a recap of the Hulk Hogan and Kurt Angle story.

Kurt Angle is with Christy Hemme and says he will never doubt Hulk Hogan again after Hogan saved him from Scott Hall and Sean Waltman.

Kurt Angle Vs Ken Anderson is up next

They did blood in this match with Angle busted open. The crowd again was hardly into this match, though this was a much better match than the previous one. Towards the finish Anderson went to expose the turnbuckle but the official stopped him and went to fix the one buckle and Anderson took the opposite sides turnbuckle off. Angle avoided being thrown into the exposed steel and came back with an Angle Slam but Anderson kicked out at two. There was a reversal and Angle was thrown into the exposed turnbuckle and Anderson hit the mic check and got the pin on Angle to advance. After the match Anderson spit in the face of Angle.

Mick Foley and Abyss are with Eric Bischoff backstage and said that he had to ensure there were no shenanigans in their match tonight and is making it a ‘No DQ Match’ so he gets what he wants and if they don’t use a barbed wire baseball bat during the match than Abyss will lose his mask. Abyss is conflicted by this, Foley says they will use the bat.

The story of the match was that Abyss didn’t want to hurt his friend but understood he had to because of the stipulation Bischoff put on this match involving the mask. These guys tried their hardest but it’s really tough to do a whole lot with Foley in the ring in 2010. Crowd kept chanting ‘Use the bat’ in reference to the barbed wire bat. Abyss steals the sock of Foley and then Foley takes the sock off of referee Mike Posey to counter. Foley dumps tacks on the floor and then Abyss teases chokeslamming Foley on the tacks but then chokeslams him away from the tacks and get a two count. Foley did a good job of getting the story of the match over with his taunting of Abyss, who eventually chokeslammed Foley into the tacks and got the win. After the match Abyss was apologetic and helped take the tacks out of Foley’s back. They never used the bat during the match.

*The Pope Vs Matt Morgan

The Nasty Boys cut a promo stating they know people think they are here because they are friends of Hulk Hogan but this match has been 15-years in the making…can’t wait.

This match was not booked the way I envisioned but the feud is clearly continuing so it made sense to build to a big brawl. This was not pretty – Jerry Sags had to carry the workload for the Nasty Boys, which tells you something. There was a great spot where Sags was playing to the camera on the floor and then Brother Ray knocked Sags into the cameraman and he fell. Jimmy Hart made a run in at the end and threw in a helmet and allowed the Nasty Boys to get the victory.

The Pope gets the win after a splash following the DDE – match was rushed but Pope is going to the finals.

Promo with Mr. Anderson with Borash, Anderson says he dominated Angle and is going to change TNA forever. They do a cool jib shot where they go from the backstage area to the ring.

Mr. Anderson Vs Abyss in the semi final

Quick match and nothing to write home about, Anderson gets the win with the mic check and advances.

A.J Styles is backstage with Ric Flair and unveils his brand new Flair style robe that has a hood like Styles’ old entrance gear.

Eric Bischoff is on his way to the ring and Hulk Hogan confronts Bischoff and says he cannot screw Styles. I love how Bischoff is a babyface in some angles and a heel in others. Hogan says to drop this feud with Flair, it’s gone on long enough.

A.J Styles Vs Samoa Joe for the TNA Title with Eric Bischoff as the Guest Referee

This match got a lot of time and was very strong with minimal outside interference that I expected would water down the match. Bischoff played straight referee throughout the majority of the match – Flair was tremendous on the floor and was the most over performer on this show. Lots of great sequences between these two. Styles took a nasty bump over the top rope and to the floor and landed awkwardly on his neck and shoulder but seemed to be okay. They teased one of them taking a bump onto the exposed concrete on the floor but neither did. Joe hit a muscle buster on Styles and had the match won but Flair pulled out Bischoff and this led to Bischoff punching Flair and he took a bump for Bischoff. Joe grabbed Bischoff and began shoving Bischoff, the distraction led to Styles hitting Joe with the Pele kick and then a followup Styles Clash and Bischoff reluctantly counted three. After the match Flair ordered Bischoff to raise the hand of the champion. This was byfar the best thing on the show thus far and Bischoff didn’t take away from the match – I still don’t like Bischoff playing a heel and yet he’s feuding with the heel champion.

They go to yet another interview with Mr. Anderson who discusses that it’s Valentine’s Day with Christy Hemme.

The Pope is interviewed by Jeremy Borash and is attacked by Scott Hall and Sean Waltman, who then look to the camera and threaten Hogan.

Mr. Anderson Vs The Pope in the Finals of the Eight Card Stud Tournament

Pope played the sympathetic babyface throughout the match where he sold the ribs throughout the match stemming from the attack from Hall and Waltman. It was sell, sell, sell by Pope and then get a hope spot and worked the crowd very well with the story of the match. Anderson brought the mic down and said he was going finish him with the mic check – he hit the mic check but then missed a swanton bomb and Pope hit the DDE for the win. 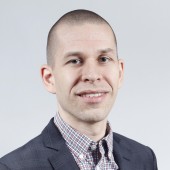 John Pollock has always been there when Slam Wrestling needed him, often with emergency reports from Live Audio Wrestling and The Fight Network. He graduated from Ryerson University in Toronto, Ontario in the spring of 2007 from the Radio and Television Arts program. Now, he runs the super PostWrestling.com website.