Foley having a nice day in TNA

Mick Foley is having a nice day. Several of them, in fact, since he joined TNA Wrestling five months ago. In town last week for an appearance on TSN’s Off The Record, the hardcore legend sat down with SLAM! Wrestling to discuss both the state of TNA as well as some of his personal non-wrestling projects.

“I’ve loved it,” he said about his time so far with TNA. In other interviews, Foley has said that his past five months have been the most fun he’s had since 2000 when he was in WWE playing the Commissioner role.

“Actually,” he clarified, “that wouldn’t be quite true. Going back and remembering about how I really felt back then, although I loved the role, overall it was kind of a tense time. 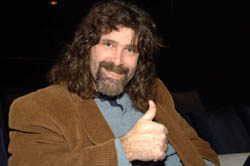 Mick Foley gives a thumbs up to his move to TNA while in Toronto recently. Photos by Mike Mastrandrea

“I had the balance of the Have a Nice Day royalties hanging over my head. So even though it would have been highly unlikely that I would have no-showed or had an argument of some kind that breached my contract, (if that happened, they could) have with-held my royalties. That was a bigger sum of money that I had made in any given year, so I felt a lot of pressure. Whereas now,” he smiled, “I’m having that kind of fun without the tension. I’ll go out on a limb and say it’s actually been a blessing to work in TNA.”

From his perspective, there’s no reason why the honeymoon period can’t continue. A lot of that has to do with the variety of roles Foley gets to play in the company, both on-screen and off.

“(My TV role) is multi-facted,” he said. “It kind of becomes what we decide it is. At times, I’ll be the authority figure; at times I’ll be giving the ‘State of TNA Addresses.’ Maybe my big role will be being coerced back into the ring from time to time. If I can get into good enough shape to give people some semblance of the matches that I had before, I think I can be really valuable to the company in that way as well.”

He’s already had a taste of action in the six-sided ring, when he competed at January’s pay-per-view Genesis in a six-man tag main event. Though some fans thought it premature of the company to feature Foley’s return at that event, he was fine with the timing.

“Clearly it wasn’t the biggest match I could have been in,” he acknowledged, “but I think it may have been the right time. It’s unlike (my last stint in WWE) in that now, it’s not going to be one match every couple of years; it’ll be a few matches a year. You don’t want your jumping off point to be the absolute zenith of your time there.”

If there was anything he would have changed about that night, it was the positioning of the match.

“The one thing that I would definitely have done differently,” he said, “and believe me I argued for this point at the time, is that there was no way that Kurt [Angle] and Jeff [Jarrett] should not have gone on last. But that wasn’t my decision to make.”

While Foley may have lost that booking decision, that’s not to say he doesn’t have some pull with the company’s creative team.

“I’ve got some say and it’s listened to and it’s respected. It reminds me of the feeling I had from the people in power at WWE for a long time.” It was a change in that perception made him reconsider his spot within his former employer, he revealed. “When I realized that I’d lost that ear”, he chuckled at the ironic turn of phrase, “and that what I had to say wasn’t considered to be that important that I realized my days in WWE were possibly limited.”

Contrarily, Foley believes he has more places to go in TNA, starting with next month’s Destination X pay-per-view. While he won’t necessarily play a prominent role on that show, Foley believes it will be fully appropriate in terms of longer-term planning.

“One of the things that impressed me about TNA is that they have a big picture. I made it very clear that the show did not need to be about me. I saw the big picture and I realized that I can make contributions when they are needed. So while I don’t see Destination X as something that I’ll play a large role in, it will be an important role in the bigger picture.”

While he wouldn’t provide any spoilers, he did hint that his role at April’s Lockdown may not be as minor. “I am training and gearing up as if I might have to do something at that show. I’ll leave it at that, for people to wonder about,” he teased. 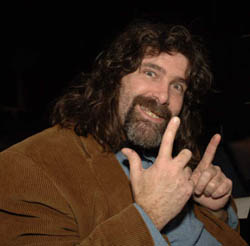 Possibly, he hinted, that match may signal him taking a more central role in the company’s major storyline, the feud between the Main Event Mafia and the Front Line.

“I think the feud has given a lot of focus to the show. We haven’t seen anybody jump sides, and depending on who does, it could be even more interesting. (It could) shake things up in a big way. Who knows? It might be me.”

No matter what twists and turns the storyline may take, Foley encourages fans to stick along for the ride. He’s aware that some critics have not always agreed with TNA’s creative direction, and didn’t shy away from addressing those views.

“Some people have a love-hate relationship with TNA,” he acknowledged, “like they really want it to work but sometimes they get frustrated when things don’t seem to go the way they like it. (To those people, I say) just have patience. Some weeks we’re going to hit the bullseye, sometimes we’re going to miss the target completely. But overall, a year from now, I think people will think that the company has made great strides.”