A former college football All-American, NFL player, journeyman wrestler and advocate for the start of a union in wrestling, Jim Wilson, who died Monday, was hated by most in the industry while he exposed its inner workings.

Looking back, Wilson just wanted to improve the living of past and current wrestlers, a topic that is argued time and time again. He had a passion to never back down, bringing his views publicly on national television, but being involved in wrestling, his calls fell on deaf ears to most of the public who looked at professional wrestling as something beneath them. 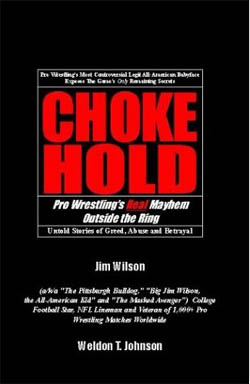 He had flown under the radar since the publication of his book, Chokehold, in 2002. On Monday, February 2, 2009, Wilson succumbed to cancer. He was 67.

Born James Milligan Wilson on June 12, 1942 in Pittsburgh, he was the son of a naval officer in World War II. He was born with an abnormal spine which doctors told him he couldn’t play sports as a child. He overcame the birth defect to become a decorated high school, college and professional football player before starting in professional wrestling.

He had early aspiration as a offensive linesman in football. He received a full football scholarship to the University of Georgia where he would earn All-American honors under legendary coach Vince Dooley.

He was drafted by the Boston Patriots of the American Football League and the San Francisco 49ers of the National Football League. He decided to play for the 49ers, where he earned all-rookie honors in 1965 alongside Gale Sayers and Dick Butkus. He ended his career in the NFL in 1971 with the Los Angeles Rams.

“The money was great,” Wilson told journalist Mike Mooneyham in 2003. “Linemen were making 25 to 30 (thousand), and some weren’t even making that. (Mr. Wrestling) Tim Woods was making around 50 (thousand) a year back then. I saw wrestling as a way to make some money, but it was a completely different lifestyle. It’s like the circus — all the carny and the secret talk, and everybody had guns back in those days. You pack up and go to the next town, and you do it over and over.”

Football injuries took a toll on Wilson, who retired from the sport to pursue wrestling full-time.

Coming from a structured unionized sport like football, Wilson quickly saw the problems within wrestling’s lack of a union. After being considered a rebel by the largest wrestling promotion, the National Wrestling Alliance, he was blackballed in 1973. He wrestled the rest of his career for non-NWA groups.

Wilson was outspoken about blade jobs, the cutting of a wrestler’s forehead with a razorblade to introduce blood into a match. Wilson also spoke about pay, travel and drug-use that he saw during his journeys. Wilson, who was allegedly promised the world by Gunkel, has no one to turn to after Gunkel died of a heart attack in 1972. Wilson was on his own.

And most saw him as trouble and not worth the risk. Wilson was tall, good looking and had natural athletic ability. He would have carried a local promotion as the champion, but it would never come to fruition.

“[He] filed a lawsuit against the NWA, and against the Atlanta office, saying that [he] wasn’t used properly, which wasn’t true,” wrestler Buddy Colt told See Is Wrestling Fake in 2004. “They put him in the main event in Athens, Georgia, because he had played football and been an All-American there, but when you’re a star, you prove yourself to be the quality to be in the main event… but Jim Wilson on his best day couldn’t draw a dime or work a lick. Wilson was always a top college football player, but when he tried to get into the pros he couldn’t make it, and he was just a mediocre professional wrestler. Would never, never have been considered for world champion.”

Jim Barnett, who had grown through the ranks of pro wrestling, including a promoting the successful Australian territory of the NWA, was a well-known homosexual by those within wrestling. Wilson later claimed a large part of being blackballed by the NWA came when he turned down advances from Barnett, a claim that was often contested by those who know both men.

He and “Thunderbolt” Patterson became good friends in and outside the ring. The two sided with Ray Gunkel’s wife, Ann, who had taken over her husband’s territory, while the local NWA promotion ran opposition shows. Both sides tried to undermined each other, with the NWA paying talent to no-show Gunkel’s shows.

Patterson and Wilson left Gunkel’s promotion when it became too ugly. Bob Roop and Ronnie Garvin would later testify in court that the NWA offered them money to try to shoot with Patterson and Wilson during a match. Roop and Garvin said they refused. Wilson and Patterson even started their own promotion in Atlanta, but after an expected sell-out at Atlanta’s Omni was sabotaged when the doors were closed before the show were to start forcing thousands to be turned away, the duo called it quits as promoters.

Wilson remained friends with wrestlers in the NWA. Jack Brisco, who Wilson was had investments with, would not book Wilson. Wilson understood.

“Every time I went to work in Florida I’d stay with Jack,” Wilson told Mooneyham. “When I went to Charlotte, I’d stay at Jerry’s (Jack’s brother). Jack and I did things together and got along great, but I understood his position.”

When ABC’s 20/20 announced that it would be conducting an investigation into wrestling, Wilson was excited. He expected that the show would expose wrestling’s litigation with the Justice Department that included pay, unions, drugs and the mistreatment of wrestlers by promoters. Wilson was featured in the piece, but he was overlooked when two major stories came from the piece. First, another blackballed wrestler, Eddy Mansfield, cut himself with a razor in front of cameras. Also, reporter John Stossel would be slapped by WWE wrestler “Dr. D” David Shults. Although both were featured in the piece, Shults would later claim he never heard of Wilson and questioned his credibility.

Wilson would spend the rest of his life trying to get someone to listen. He would co-write Chokehold: Pro Wrestling’s Real Mayhem Outside the Ring in 2002 along with Welden T. Johnson. The book wrote in detail about the FBI and Justice Department’s investigation of the NWA. It also featured WWE’s steroid and sexual harassment scandals of the early 1990s.

Survived by a wife and six children, Wilson worked in real estate for the past 20 years. A memorial service will be held February 13 at 3 p.m. at Peachtree Presbyterian Church in Roswell, Ga.

— with files from Mike Mooneyham and Canoe wire services.