Getting chummy with Shark Boy

When SLAM! Wrestling last spoke to Dean “Shark Boy” Roll in 2005, not only was the overall landscape in TNA very different to what it is today, but so was he. 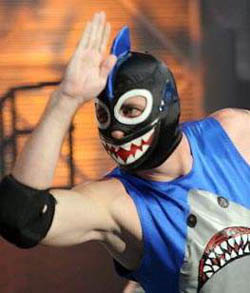 At that time, the company was just months into its new format of weekly television shows, and monthly pay-per-views. But with the former, there was no prime-time television slot, nor even a deal with Spike TV — Impact! was screened solely from TNA’s official website after low ratings caused it to be axed from Fox Sports Net.

And contrary to his brash persona in 2008, at the time, the Shark Boy character was completely mute, and had not uttered a word since his first bout with the company in 2002. But a whim of writer Vince Russo changed that, and furthermore allowed Roll to emulate one of the performers that he admired the most: “Stone Cold” Steve Austin

“This whole ‘Stone Cold’ thing was just a silly impression that I would do on the road, trying to crack the guys up,” Roll recently told SLAM! Wrestling. “Around the time of the Monday Night Wars, I had a buddy who used to do a great impression of The Rock, and he did his impression before I ever did mine. So we’d be out having a good time, and he’d start with The Rock impression, and I’d fire back with the Austin impression. That was the beginning of all of this.

“But when Jeff Jarrett heard me do this in front of the other guys, he said that it was something that we could possibly do on TV at some point. At around that time, Shark Boy was injuring a different part of his body every time he wrestled, and so Vince Russo and I decided that we could transition that into me doing these impressions, by having Shark Boy fall into a coma (laughs). So when I came out of it, suddenly not only was I talking, but I was talking like Steve Austin!”

This side of the Shark Boy character — such a change from its previous incarnation — is something that Roll now thrives on, especially considering Austin himself gave the spoof the seal of approval earlier this year. But while “Stone Cold” Shark Boy has kept TNA fans entertained for months, not all of Vince Russo’s concepts have. But Roll has nothing but good things to say about one of wrestling’s most divisive figures.

“Speaking for myself, Vince Russo has definitely contributed positive things to the Shark Boy character, and I’ve always liked working with him,” said the Cincinnati, Ohio native. “The first thing we ever worked on was when I was teaming with New Jack, playing board games and having so much fun doing these ridiculous segments. We went around the park at Universal Studios and made music videos of me doing a bunch of silly stuff. And of course, there’s the stuff we’ve been doing recently.

“It’s always been a lot of fun, and actually, I think his sense of humour and mine are really very similar. It’s fun to put our heads together and see what we can come up with creatively.”

Another of those creations has been the Prince Justice Brotherhood triumvirate, consisting of our subject, Super Eric (Eric Young), and Curry Man (Christopher Daniels). With all three performing humorous “superhero” characters, to some, it may seem like overkill. But just as much as he has enjoyed playing his own part, Roll has enjoying playing off of the others, too. 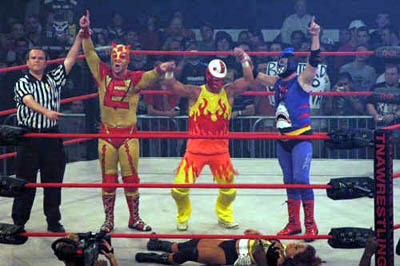 “It’s been great working with Super Eric and Curry Man,” he said. “I think some of the best vignettes I’ve done have been with those guys. With Curry Man in particular, as I love the way our characters interact with each other.

“Recently someone told me that I was the perfect foil for that character, and I think it’s really true. Everything Curry Man does annoys Shark Boy, and I can just be this angry son of a bitch when I’m around him. Then you add Super Eric into the mix, who angers me by consistently flinging his cape into my face! You know, Shark Boy just thinks these guys are complete weirdos — never mind that I’m standing there wearing the outfit that I am.”

While always a highlight for those who enjoy the entertainment aspect of latter-day professional wrestling, for those more interested in the sport as it has been in years gone by, too much comedy and too little meaningful wrestling sums up the problem with TNA. But while he can certainly understand that point of view, Roll can’t help but think that there’s room for both, depending on the occasion.

“If you had asked me a few years ago whether doing things like this would have detracted from my wrestling, I might have said yes. But now, I’ve been in the business for a while, and I feel that you have to go out there and entertain, period. If people get more out of what I do on the mic or in the vignettes than they do from watching me in the ring, that’s fine and I’m happy with that.

“Some people say that they want to see me have more matches, and those people are the ones that I am thinking of when I go to the ring and crank it up in there, to give the best performance that I can. But as far as whether I’m worried about being treated as a serious performer in the business, I don’t think I would have ever worn the Shark Boy outfit, if that was a main concern. The one thing is that no matter what I am asked to do, I go out there and do it to the very best of my ability.”

Whether you agree with their direction or not, it would difficult to argue that the vast majority of the TNA roster does not approach their work in that very same manner. And that hard graft was rewarded by the viewing figures achieved by Impact! on December 4, when a record 1.8 million viewers tuned in on Spike TV for the broadcast. But while that was obviously quite the achievement, Roll was insistent that no-one was becoming complacent with the figure, and that further improvement was the only thing on the agenda.

“I think we’re excited about the record, but it isn’t as if we all stopped and patted each other on the back,” he noted. “I don’t think we’ve yet reached our goal, and that’s to try and at least double that number, to try and have as many fans as possible follow us, and to tune into our show. We feel like there’s still plenty to do.

“As far as how we do that, I can only give you one Shark’s opinion (laughs). If I knew what the secret formula was, I’d be a lot richer. Is it signing big name wrestlers? Well, that absolutely helps, no doubt about it. Is it more wrestling and less comedy? It depends on your tastes, but most wrestling fans probably want to see more in-ring action on a wrestling show. Then again, I’ve had all kinds of feedback about my role in the Prince Justice Brotherhood, and people will say, ‘Oh man, I only watch when you guys are on!’ So it’s a matter of personal taste, but I think what we need to do more than anything is to try things, experiment, learn from our mistakes, and keep trying to improving our product.”

As for his own future, at 33 years of age — in his own words, “not one of the young guys anymore” — Roll is pragmatic about what he wants to achieve in the business. Instead of shooting for a main event spot, for example, he’s more concerned about living the dream, just as he has done for the last six years in TNA.

“At this point, I just want to be involved in the business as long as possible,” he concluded. “TNA is a really fun place to be, right now. I’m surrounded by friends that I’ve known for a long time now, and by people I respect, people that I learn from, and people I enjoy hanging out with on the road.

“I certainly want to keep moving forward every year, and that’s something that I feel I’ve accomplished in 2008. I feel like I am probably more well-known now than I have previously been, and I think a lot of that is down to TNA; not just that they put me on TV and PPV, but that they have me involved in video games, t-shirts and things.

“Everyone wants to main event the big pay-per-views, and be the world champion, and I can tell you that I’d love to do that, but I don’t know that I could list it as a goal. You know, even if I don’t achieve that in this business, I’ve had the time of my life. I’ve been all over the world, and I’ve done things that I never would have been able to do, if it weren’t for professional wrestling.

“This is a job that I truly love.”