When you think of WWE’s top-rank wrestlers who have been around for a decade or so that deserve a DVD, your thought will tend to turn towards guys like Edge or Chris Jericho — men who have had four or five-star matches in their career, consistently find themselves on wrestler-of-the-year shortlists and have many titles hanging over their mantlepieces. 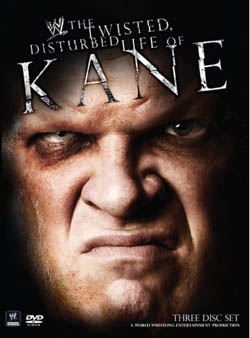 Among those wrestlers though, is one guy who you probably would not immediately say, “hey, that guy deserves a DVD,” and that man is the subject of a recent career-chronicling compilation — Kane.

Let’s call a spade a spade right from the beginning when discussing The Twisted, Disturbed Life of Kane. Most fans won’t immediately look at this DVD favourably, because Kane, aka Glen Jacobs, has not been one to have the workrate classic bouts that we’ve come to know and love from WWE releases; rather, the Big Red Machine is more prone to gimmick matches, and that alone may be enough reason to pick up the DVD.

For me, there is no better match on the DVD than the original Inferno Match from back in 1998. This was when Kane, literally and figuratively, was on fire and in the original feud with Undertaker before they began the long road of being, to use a horrid term, frenemies. The drama of the match really worked here, and as a bonus it’s one of the few times in WWE that Vader wasn’t made to look like a complete oaf by the Fed. Also, there is a good no DQ match vs. Shawn Michaels from 2004. Of course, we do get other specialty matches that are a bit more forgettable, such as the Ambulance Match with Shane McMahon and the Stretcher Match with Edge.

The truly interesting thing though, is that Kane does have a decent set of non-gimmick matches, including bouts against Kurt Angle and a tag match with Rob Van Dam against Chris Jericho and Christian; unfortunately, for each of these bouts we get some marginal matches such as one from the Gene Snitsky feud.

Of course, there are some goodie extras, including Pete Rose, a hilarious promo with Rock and Hulk Hogan and others.

If there is anything that really is disappointing, but nothing I’d really have expected WWE to ever do, is that I would have loved to have seen a clip from Jacobs talking about the Kane character, his enjoyment of having this decade long run and some of the previous failed gimmicks such as Fake Diesel and Isaac Yankem. It’s a pipedream really — one that will have to wait until Kane retires and we can find it on a shoot video.

Until then, I’d recommend giving The Twisted, Disturbed Life of Kane, at least on a first-look, rental basis.