New Guerrero DVD gives fans more than they could ever want

Going into Viva La Raza – The Legacy of Eddie Guerrero DVD Set, I had a pretty good expectation of what I was going to see – a fantastic assortment of Latino Heat matches that would take up a new slot in my permanent collection of WWE Home Videos, and indeed that’s what I got; but I also got a little bit more and a little less than what I had bargained for. 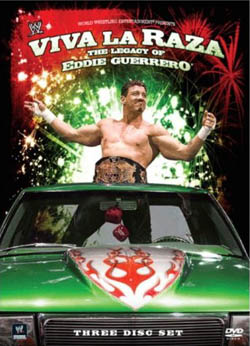 You see, when WWE Home Videos are announced, I make a mad dash for the SLAM! Wrestling Store to see what bouts are going to be included in the compilation, and the list was pretty damn extensive. Yes, there were repeats from the previous Eddie collection, Cheating Death, Stealing Life, namely the championship match against Brock Lesnar, but there are plenty of bouts that have not been previously included on a WWE DVD.

Tops on this list for me, and for fellow Canuck Adam Copeland, is Edge’s no DQ match against Guerrero from Smackdown a few years back, just a short time before the emergence of the Smackdown Six. This was easily my favourite Eddie match, and I am glad that fans now get the chance to see it, along with other classics such as a great match with Rey Mysterio from Smackdown while Guerrero was in the midst of his title run.

What is a disappointment though, but unfortunately accepted in the new world of WWE recordings, is the lack of any reference to Chris Benoit. Yes, I know that you’re more likely these days to see Bruno Sammartino on a WWE compilation than Benoit, Eddie and Chris’ careers are so tightly linked that it’s unthinkable to release a DVD that completely cuts one away from the other; or so one would think. WWE’s wounds from the Benoit incident clearly have not yet healed, so one has to accept what they are given, both on the regular recording and the bonus disc (available through Best Buy), which contains the tribute show to Guerrero.

I was also somewhat surprised that WWE didn’t dig a little deeper and put on an Eddie match from his days in Mexico, like they did with Cheating Death, Stealing Life. Granted, that one was from the U.S.-based lucha PPV When Worlds Collide, but I can’t imagine that any organization south of the U.S. border wouldn’t be able to provide a match or two for this special compilation, nor that a Super J Cup bout couldn’t be included. On a completely different note, it would’ve been really cool to have a match of Eddie in the indies while he was away from WWE, such as the Ring of Honor match against Super Crazy or the YouTube favourite against CM Punk and Rey Mysterio Jr.

So by now you’ve probably got the impression that the only substance to this DVD are a bevy of good matches; well, there’s a bit more to Viva La Raza than that, and this is what caught me by surprise. As is WWE’s recent tradition, each match gets an intro, only rather than an individual talking about his own matches (as was the case with the Rob Van Dam and Triple H DVDs), we get a series of guest appearances with WWE talents past and present talking about Eddie’s career and putting the bouts into context.

Believe it or not, these were probably the most enjoyable parts of the collection for me. Not since the tribute show had we seen wrestlers like JBL and Edge be able to speak about Eddie from the heart. This was a great move by WWE and one that, as sad as it sounds, I hope will be repeated for more of our fallen heroes.

No matter which way you look at it, be it as a match collector or the tribute junkie like me, Viva La Raza is a great DVD to own. Do yourself an immense favour and get this compilation right away.