FREMONT, CA — Rest assured, says The Honky Tonk Man. His finger has healed and he’s ready for action at Cyber Sunday, should the fans elect him as the challenger for Santino Marella’s Intercontinental title. A warm-up bout Friday night proved him right.

Up until last night’s 14-minute win over L’Empereur (who does a full Captain Crunch lookalike gimmick) in Northern California for Kirk White’s Big Time Wrestling promotion, which was celebrating its 12th anniversary, Honky Tonk Man hadn’t wrestled in four months. 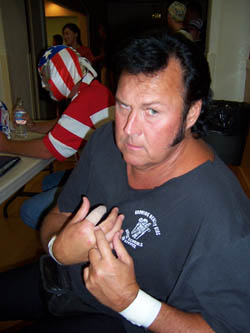 The incident where he hurt his hand — split it open and damaged his finger — occured at a Boston Pizza restaurant in Charlottetown, Prince Edward Island, promoting an Ultimate Championship Wrestling show in late July, and quickly made it to YouTube.

The Honky Tonk Man (Wayne Ferris) recalled the accident after the Big Time Wrestling show. “It was for the promoter’s guitar sponsor, since the guitar over the head was my gimmick years before Jeff Jarrett. We did a stunt [guitar] up there though, where I swung my guitar at the same time one of the boys swung their guitar at mine. They crashed into each other and wood flew everywhere. A very big sharp chuck of it went way deep into my hand near my finger and ended up really severing the tendon,” he said matter-of-factly. HTM’s right ring finger was most damaged, and he required stitches and the hand was bandaged.

“I saw emergency doctors and specialists up there before going back home to my doctors in Phoenix. So I haven’t wrestled since, and haven’t done anything but try to get it corrected back to whatever it’s going to end up as. Haven’t hardly used this (right) hand. It wasn’t the promoter’s fault or anything, I just shouldn’t have agreed to do that stunt.”

Back in Arizona, he got more treatment.

“My own area hand specialist put a revolutionary soft, immobilizing cast on it to protect it, but also let me get it moving so I could get it back to close to where it was. The finger is now shorter than it was and curls up. I’ve been doing everything they’ve told me to get it back into shape.

“But you can see I can’t bend it all the way out flat at all though, and it still hurts a lot most all the time. I’m such a health person, I don’t take anything for it. It’ll just take time and exercise.”

When the WWE initially approached him about being involved with an angle with Santino Marella, he warned them he wasn’t as physically capable as he wanted to be.

“I told (WWE) I finally could some physical stuff which they want, so tonight is a good dry-run for me. Initially when they asked I told them I couldn’t do anything physically, my hand was so messed up (see photo). But the last couple of weeks, I’ve been working on the mobility and I’ll be more than ready Sunday at the PPV.”

Just as Honky was a babyface Friday night, he expects a good reaction at Cyber Sunday. “I’ll be the face at Cyber Sunday — everyone there knows I live there and I think we’ll get a great reaction.” Other choices to face Marella are Goldust and Roddy Piper.

He says the angle, where Marella mocks many stars of the past and has targeted The Honky Tonk Man’s longevity record for an Intercontinental title run, has been a topic of conversation. “The fans want it and everywhere I go, they ask me to beat this guy and keep my record. It’s sort of like Undertaker’s Wrestlemania record. But I want it to go beyond just this Sunday which is why I’ve worked so hard to rehabilitate my hand to prepare. I’m good to go and my doctor was surprised.”

Another surprise is in store for those those who haven’t seen HTM in a while — he’s in pretty good shape physically and cut his long ponytail that he had been working on for years.

“I finally cut it off and donated it to that cancer charity organization,” he said, adding that he is “in some of the best shape I’ve ever been.” 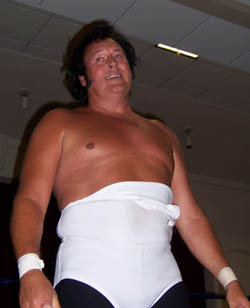 His voice is ready too, should it be called upon. Friday night, he sang his theme song, as a birthday present of sorts for the promotion.

In short, Honky Tonk Man was in rare, brilliant form. Whereas many from his era haven’t aged as well — “Jake [Roberts] called me last night and I couldn’t understand a word he said,” he quipped — The Honky Tonk Man is like Dorian Gray; clean living in the desert agrees with this legend.

It hasn’t dulled his wit either; there’s always a chance to know Hulk Hogan and his new “reality” show, Hulk Hogan’s Celebrity Championship Wrestling. “They all look like works to me. That includes every one of them except for maybe the Osbornes and that’s only because Ozzy’s too messed up to memorize or practice his lines. Maybe Sharon practiced or did them over. The Hogans show seemed that way to me. That’s why I don’t live in Florida. The friends of Hogan mainly live there. I don’t know how we picked Arizona, the weather maybe and being away to get away.”

Here are the rest of the results from the Big Time Wrestling show: