Scotty Riggs sure likes to talk. Just don’t expect him to get to the point anytime soon.

“You ask me what time it is and I’ll tell you how to build a watch. And at the end of it, never even tell you what time it was,” he says in one of Highspots’ latest shoot interviews.

Riggs, (a.k.a. Scott Antol), is a talkative man who needs little prodding to reveal the details of his career. The interviewer even fails on several occasions to get Riggs to end their four-hour chat, until finally convincing him they’re nearly out of tape. 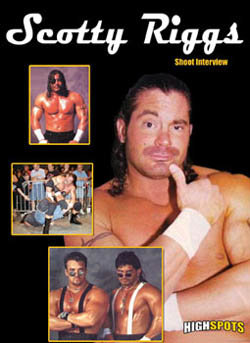 But don’t mistake his sometimes long-windedness for confusion or forgotten memories. The gravelly-voiced 40-year-old Riggs, who now looks more like a burly trucker than the pretty boy he portrayed while a member of WCW’s American Males tag-team, is able to describe his life in linear detail.

Even if you’re not a fan of Riggs, his enthusiasm for the business makes for interesting listening for most any pro wrestling follower. Riggs leaves no stones unturned as he retraces his days as a childhood wrestling fan, breaking into the business, riding around with Jake “The Snake” Roberts, working as enhancement talent for WCW, moving on to Jerry “The King” Lawler’s Memphis promotion, reaching his pinnacle as a tag champ in WCW, and eventually heading off to ECW and later Dusty Rhodes’ Turnbuckle Championship Wrestling.

What separates Riggs from many of his former WCW peers is that he doesn’t look back on his time in Atlanta with bitterness. If anything, he’s thankful to have been part of the business as it exploded in popularity during the mid-to-late-1990s.

“It was definitely a life of excess back then … you had anything you wanted thrown at you,” he confesses.

Even when Marcus “Buff” Bagwell split from the American Males to join the NWO and Riggs became somewhat lost in the WCW political shuffle, he maintains he enjoyed himself as he kept his focus simply on wrestling. One should admire his earnestness and applaud his decision to avoid politicking to get to the top. Riggs also takes the step to thank those who helped him along the way, repeatedly expressing gratitude to Arn Anderson, Jimmy “Mouth of the South” Hart, Raven, Rob Van Dam, Rhodes and Barry Windham.

In many ways, Riggs has an old school attitude toward wrestling, which is hammered home when he decries WWE’s RAW, Smackdown and ECW brand TV shows as being little more than hours of pay-per-view and merchandise infomercials.

For $14.99, the viewer gets a two-disc set of a guy who isn’t shy about revealing his pro wrestling experiences. But what you don’t get is an especially professional looking product.

The back cover of the DVD case describing its contents is filled with typos and reads like it was translated from Japanese. And Riggs’ rambling style occasionally makes the interview drag on, and one wonders if an abridged version including only his most relevant and on-point comments would have been the best way to go.