Over the last number of years, dear readers, you’ve seen me take a few pot shots at Paul Levesque, better known to the world as Triple H.

I’ve cracked on HHH’s name (often referring to him as Trippy), HHH’s spot on the roster (namely the one on the booking team) and taken other jabs at the double-digit champ. 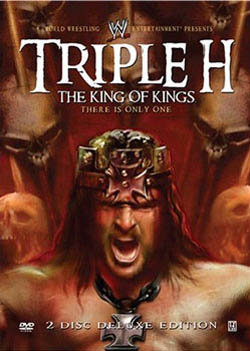 I don’t do this because I hate the man once known to the world as Terra Ryzin; in fact, it’s quite the opposite. I’ve enjoyed his body of work over the years… minus some of the behind the curtains rumour and reality.

Maybe it’s for that reason that I was anticipating The King of Kings so much. Unlike many WWE DVDs released today (well, except for the latest Steve Austin release), the two-disc set looks purely at HHH’s in-ring career. Come on, did you really think we’d get a behind the scenes, E! True Hollywood Story-esque expose on the man Vinnie Mac calls “son-in-law”? There’s a better chance of me getting in the WWE Hall of Fame.

That’s not to say we don’t get an inside peek at Levesque. The man himself introduces every match on the compilation, talking about some, but not all, back story moments, including the MSG Incident with the Clique, the introduction of Chyna into WWE and others. The whole Bret Hart incident, unfortunately, is not mentioned.

The match inclusions are all extremely solid, including the two-out-of-three falls match against Shawn Michaels from Armageddon ’02, the Hell in a Cell match vs. Cactus Jack and the always expected Raw debut match (back when HHH was using the Ace Crusher/Diamond Cutter/RKO as his finisher).

Unfortunately, there are a couple omissions, namely anything from HHH’s WCW career. Even putting one match on the DVD as a sampler, like what was done with Rob Van Dam, would have been most welcome. The inclusion of a handcam-taped showing of HHH’s first-ever pro match though, is a great, great inclusion that I hope can somehow be seen more often on future DVDs.

What burns me most, however, is the included Royal Rumble match from 2002 (that being the one HHH won). I’ve really enjoyed adding these bouts to my DVD collection and probably re-watch them more than any other (just ask my wife). The included match here, though, is clipped at entry #24 when Hunter enters the fray. This was a major disappointment. Would it really have been that hard to expand this one match and, if need be, add a third DVD on this set? I can come up with a lot more matches from HHH’s WWE career that could’ve been added to fill up the third disc (the match vs. Ric Flair where we all thought Naitch would retire comes to mind immediately).

Leaving that gripe aside though, I can safely say that The King of Kings will be sticking around in my DVD library, and it should in yours as well. There are some great matches included here, which, when watched standalone and without the controversy that has surrounded Levesque for the last decade or so, can be truly appreciated both for workrate and sheer intensity. Go out of your way to pick up this compilation DVD — you won’t be disappointed.

Oh, and before this DVD review closes, I will give a thumbs down to WWE Home Video, but for another reason. You see, the division has yet to establish a packaging format that they stick with. This time around, they put plastic holders on either side of the single case, allowing the match listing insert to slide around and inevitably get damaged. Top it off with a plastic sheath that again will encounter bumps and bruises, and you’ve got some of the worst packaging that has ever emanated from Stamford, CT.