Rushed. That would be the one word used to describe WWE’s latest release, The New and Improved DX.

After striking gold with several DVD releases, WWE Home Video has hit a speed bump. In The New and Improved DX, WWE takes a kayfabe look at the reformation of D-Generation X with Triple H and Shawn Michaels from June 2006 – November 2006. While the DVD covers nearly every segment they were in during that time, unless you really like “cock” jokes or exposed rear ends, it won’t necessarily suit your fancy. 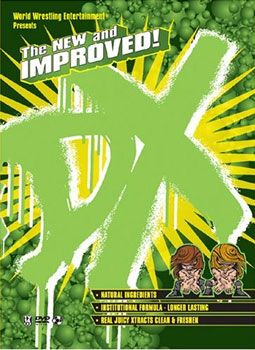 The New and Improved DX runs us through their latest run, step-by-step, resulting in the same jokes popping up over and over again. By the second disc things get redundant and dull. One of the only saving graces is the comical interludes provided by Mr. McMahon, Jonathan Coachman and a few others, simply expressing their distain for the degenerates.

Another unique feature that somewhat salvages this set is the raw footage provided on a few matches. The Raw and SNME matches on disc one are shown in their entirety, with footage of what went on during the commercial breaks. For whatever reason, that bonus feature is missing on disc two and three; however, the matches are still shown as they originally aired. Bonus matches would have been a plus, but were nowhere to be found on this set.

Had WWE molded this like the Ric Flair, Bret Hart and Vince McMahon DVD sets and included footage of the old DX in both the retrospective and extras, this DVD would have been much better. Overall, The New and Improved DX DVD set is a rushed piece with a sub-par effort put into it. If you’re a diehard DX fan you might like it, otherwise, don’t even bother.

– DX vs. The McMahons and The Big Show (Unforgiven 2006 Highlight Package)