Say what you will about WWE, but one thing that the company has done well on a fairly consistent basis, is use their vast video library to put together high-quality DVD collections. A recent release, ECW: Extreme Rules, continues this trend, and offers an excellent sampling of matches from that company’s past and present.

Using the same successful formula used for last year’s Bloodsport set, ECW: Extreme Rules sticks to the basics — in this case, the hardcore action that ECW fans know and love, packing the two-disc set with 17 matches spanning from 1995 to the company’s relaunch late last year. 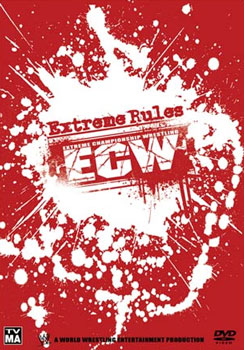 Action-wise, there is little to complain about. The matches presented showcase a relatively good cross-section of the company’s original years. Some of the company’s most memorable — and most hardcore — matches are included. Surprisingly, the company even includes matches that feature wrestlers who aren’t with WWE today, even the Dudley Boys and Shane Douglas (who are with the current competition), though, notably absent are names like Raven.

If there is a complaint about the set, it’s that not enough of the content is from that era. Indeed, over half of the matches took place in the past year, including televised matches from the WWE vs. ECW special and the weekly Sci-Fi show.

That said, the ones that were shown on free TV aren’t all bad — in fact, the Big Show vs. Ric Flair match is actually pretty darn good. But anyone who’s only interested in the classic stuff may want to pass on this one, as it’s heavy on the “WWECW” content.

For anyone else, though, ECW: Extreme Rules would make a pretty good addition to their collection.

This match kicks off the DVD with some great violence, as the first “moves” used are multiple Singapore cane shots. Weapons are introduced in the first few minutes, including barbed wire, an ECW staple. A fun, hardcore affair.
Match Rating: 5/10
Violence Rating: 3.5 scars
Comment: Remember when Sandman had cool entrance music, didn’t look sickly, and was spry enough to do a running leap from the ring over the top rope? I must be getting old.

This one is an all-out brawl, as the two fight all around the building. The match doesn’t take long before they climb the scaffold. Up there, Tommmy takes what might be the ugliest crotching ever before the ending, which is an iconic visual that will be on ECW highlight reels forever.
Match Rating: 4/10
Violence Rating: 2 scars

Again, another crazy match that starts off with some extreme action, in this case, a ladder to Sandman’s skull. Man, Sabu was so innovative back in the day, it’s scary. Both men nearly get schmucked after an ugly table spot, after which more weapons are introduced. By the end of the match, both men are wearing crimson masks.
Match Rating: 7.5/10
Violence Rating: 4.5/5
Comment: Watch for a cane shot that literally explodes Sabu’s jaw — and see how he treats the injury.

Man, do I love watching these two go at it. If I had to choose only one feud to watch for the rest of my life, this would probably be in serious contention. Everything these guys do looks like they want to legitimately destroy the other one. So much violence, so many has-to-be-three pinfall attempts, really this is some of ECW’s best stuff ever.
Match Rating: 8/10
Violence Rating: 4/10
Comment: Sad to watch this match after Mike Awesome’s passing earlier this week. Thanks for the memories, sir.

This match from One Night Stand 2006 was an Extreme Rules match for Rey’s World Championship. This was a lot of fun, starting off with dueling chairs, and progressing from there with a brutal table spot and lots of crazy offense from both men. The double-countout ending had the crowd up in arms, but given the move that put both of them out for the count, it’s not hard to see that both of them could have really been seriously injured.
Match Rating: 7/10
Violence Rating: 3/5

Given Show’s health problems in the past year, he really deserves credit for putting on some of the matches he did as ECW champion. Flair is the hero of this one though, and he puts on an amazing performance, even taking a chokeslam into a pile of thumbtacks. A stellar blend of in-ring psychology and extreme violence.
Match Rating: 8/10
Violence Rating: 4 scars