Estrada more than a mouthpiece

Armando Alejandro Estrada insists that John Cena’s pinfall victory over “Samoan Bulldozer” Umaga at New Year’s Revolution was a fluke. This Sunday’s Royal Rumble rematch, he vows, will be different.

“Unlike the last pay-per-view, where Cena was able to score a cheap, fluke win — you saw the pay-per-view — he got beat pillar to post throughout the duration of the match, and he was able to pull a rabbit out of his hat at the very last second to get a cheap three count,” Estrada told SLAM! Wrestling, launching into an explanation of the bout at the Rumble. 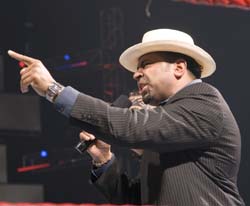 It’s typical bluster for a heel manager. What’s not so typical is Estrada’s quiet manner on the phone, easy-going and personable from his part-time Chicago home.

Given Umaga’s place on the last two pay-per-views, it is hard to believe that he and Estrada have only been a part of the Raw roster for less than a year, debuting after WrestleMania 22 in April 2006 with a series of shots at an aging Ric Flair.

Umaga’s resurrection has been as much a surprise as Estrada’s stepping into the role as the lead heel manager in the company. Edward Umar Fatu had been off the WWE roster since his 2002 run as Jamal in Three Minute Warning, spending time in TNA (as Ekmo) and Japan. His wrestling pedigree was always there, however, given that his brothers both wrestled — Solofa Fatu (Rikishi) and Sam Fatu (The Tonga Kid), and his extended family includes Dwayne “The Rock” Johnson and “Soulman” Rocky Johnson, Rodney Anoa’i (Yokozuna), Samula Anoa’i (Headshrinker Samu), Matt Anoa’i (Rosey), and the Wild Samoans Sika and Afa.

Estrada says that Umaga stands out in any comparison with other grapplers of similar descent. “Comparisons can be made between Afa or Sika or some of the older Samoans that have come and gone throughout the years,” he said. “But I haven’t seen any other 300-, 350-pound Samoans move the way he can move — to get in the ring and move around like a 220-pound cruiserweight. I would put him at the top of the list.”

Is it difficult working with Umaga, an apparent wildman? “He’s easy to get along with. He’s a lot like me, we like a lot of the same things. He just has to have his coffee in the morning, otherwise get out of his way,” Estrada said, revealing a trade secret. “You keep him away from the caffeine six hours prior the matches.”

The ride for Estrada to the top was a little more direct than Umaga. The six-foot-two, 230-pound Chicago native of Palestinian descent cracked the Ohio Valley Wrestling roster in 2004, acting as a bodyguard named Osama for the controversial duo of Muhammad Hassan and Daivari. When his colleagues were called up to the main roster, his role was expanded under booker Paul Heyman. Now known as Osama Rodriguez Alejandro, he began managing Robbie Dawber and his vocal skills were brought to the forefront.

He admits to having been uncomfortable with the whole Osama concept. “I didn’t have a say in that. It was like, ‘Okay, what do you want me to do?’ That was the name thrown upon me. I hated that name, I never particularly cared for that name. But it was show up and do what you were told. But I had fun. I enjoyed it. I enjoyed my time there [in Kentucky].”

Estrada is enjoying his time on Raw a whole lot more. “What’s not to enjoy? The Samoan Bulldozer, Umaga, has pretty well run roughshod through the company. He’s taken out everybody he’s been in the ring with — with the exception of the champ, who’s next on the list.”

With his flashy dress, motormouth, and catchphrase — initially introducing himself as Arrrmando Alejandrrro Estrrrada until it proved too popular and was scrapped — Estrada is not that far off from some of the great managers in the WWE’s past. “I’d never compare myself to those guys — I’m actually better than them! No, just kidding. The Bobby Heenans, Freddie Blassies, Jim Cornettes, Mr. Fujis, Jimmy Hart and all those guys, that’s an elite group of men right there, an amazing group of performers and an elite group of managers. I’ve got a long way to go before I can even be mentioned in the same breath as them.”

The Estrada character, he says, is “99.8 percent” himself, calling it a “toned down Armando.”

Still relatively new to the business, he isn’t shy about seeking help. “I’ve solicited advice from quite a bit of the guys that I’ve worked with. Obviously, they’re more experienced than me, so they know what they’re talking about. So any feedback is appreciated. Everybody’s been great. It’s hard to just say one or two guys; it’s been everybody.”

What’s next? Perhaps more wrestling? “I do what I’m told. For now, they just want me to be the mouthpiece. I have absolutely no problem with that. We’re challenging for the title this week. What a great position to be in, possibly representing as WWE champion. If I’m called upon to get in the ring and get my hands dirty, I’m always ready, I’ve always got the boots ready to go.”

He is looking down the road at WrestleMania: “After we win the title this Sunday, we’ll be sitting back watching the 30-man Royal Rumble, and whoever comes out of that, that’s probably going to be a good indicator of what the matches are going to look like.”

His pick for the Rumble? “Am I in it? I don’t think I’m in it,” Estrada deadpanned, further offering up predictions of victories by Hulk Hogan or Ted DiBiase. “It’s a tough one. Actually, I don’t know if there’s really a favourite. It can go probably anyway. You’ve got three brands represented, so there’s a possibility of three different title matches based on that match for WrestleMania.” In the end, when pressed, his pick is a little out of the backfield — Super Crazy, whom he says deserves more of a break.