Looking quite at home on the red carpet last Wednesday, while heading in for the announcement of The Score snagging Monday Night Raw, Trish Stratus took a moment — and just a moment — to talk to the media about her future in wrestling.

Much speculation has been going around about the 30-year-old Stratus pulling a Chris Jericho, and walking away from wrestling completely. The signs are there — she’s been testing her mettle in other fields, like Second City comedy, and she hosted Canada’s Walk of Fame gala in June.

According to published reports, her contract comes up at the end of August. 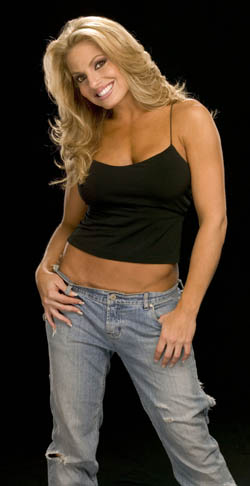 The former WWE Women’s champion is also getting married at the end of September. However, unlike Jericho, who invited the Winnipeg Sun to his wedding to take photos, Stratus is very private about her nuptials and does not discuss them publicly.

So Trish, how long will you keep wrestling?

“Wrestling? As long as my body keeps letting me do it,” she told the Triple Threat media scrum of SLAM! Wrestling, Live Audio Wrestling / The Fight Network and Rudy Blair from 680News.

What about the Unforgiven pay-per-view in September? It’s in Toronto, your hometown. Will you be there? “I’ll be there, probably kicking some butt. I think needs some Stratusfaction, don’t you think, coming to Toronto, why not, right?”

With that, Stratus was whisked away to hype Raw’s move to The Score. At the press conference, she did not address her future. Afterwards, she was not part of the media scrum; instead she was out meeting fans and giving away prizing with fellow diva Torrie Wilson.

Back in March, Stratus talked a little longer about her future in the squared circle with SLAM! Wrestling. “I think I will always be connected to the world of wrestling one way or another. It’s all that I know right now. The thing about wrestling and challenges in my life is that it’s always presenting new challenges. There’s always new challengers, there’s always a new storyline to work over.”

And until a new deal is in place, the ‘Will Trish stay?’ storyline appears to be here for a while as well.

Despite the speculation amongst staff, SLAM! Wrestling Producer Greg Oliver is not the one getting wed at the end of September. Nor has he been invited to Stratus’ wedding … yet. Email invites accepted at [email protected]