Cage proud to be on top

A few years ago, it would have been crazy to suggest that a wrestler would turn down a WWE contract so that he could go work for a competing company. But NWA Heavyweight Champion Christian Cage did exactly that just a few months ago, and he has no regrets whatsoever about his decision. 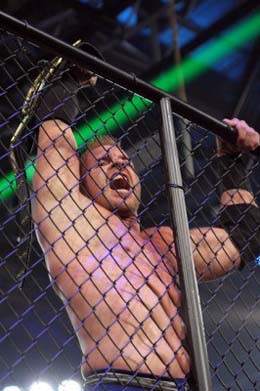 “The transition (from one company to the other) has been great,” he told SLAM! Wrestling last week, after his appearance at a Blood Sweat and Ears event in Mississauga. “Very smooth. Obviously, there have been some differences (between locker rooms), but it overall has been a lot of fun.”

Even more fun was winning the NWA Heavyweight Championship, an accomplishment that he achieved very soon after making his debut for TNA, and one that he’s immensely proud of.

“(Winning the belt) was huge for me,” he said. “It would have been a big void in my career if I hadn’t won a world title. To be recognized as ‘the guy’ in a particular company, to work for it and earn it and to be given that opportunity is a huge honour. But getting it and keeping it and doing the right thing with it are different things.”

Cage hopes that he has been ‘doing the right thing’ in terms of consistently putting on great matches against top opponents, and ultimately rewarding the company for having the faith in him to give him the belt in the first place.

This weekend at TNA Sacrifice, Cage puts up his cherished trophy as he defends against Abyss in a Metal Mayhem match, in which all manner of weapons will be allowed. This is a rematch from last month’s Lockdown pay-per-view, which was the first time the two had a match. Some critics didn’t like the fact that their first encounter was in a gimmick match, suggesting that feuds should end with that kind of stipulation, not start. But others feel that the intense heat generated through the vignettes in the weeks leading up to the show warranted a bigger-than-average match.

The vignettes showed Abyss and his manager James Mitchell provoke the champion by attacking him at his own home, and even confronting and intimidating Cage’s real-life wife, Denise.

While some wrestlers would balk about using their wife to further a wrestling angle, Cage had no such qualms.

“It’s one of those things that, if I felt too uncomfortable with it, I wouldn’t have gone that route. But it was something she wanted to do, so I figured why not, and I think she did great with it.”

Call it yet another positive experience for Cage since having jumped companies. It’s one of many, he says, including receiving an overall welcoming reception from the locker room. According to him, there was little concern expressed by other members of the roster that he would be coming in and ‘stealing their spots’ in terms of main-even opportunities and title reigns.

“I never got that vibe,” he said. “Nobody’s ever made me feel that way, and nobody’s ever said anything like that to me that (they had those types of concerns). Everybody who came up to me told me that they were glad that I was there. It was a very pleasant surprise to see that kind of environment in the locker room, to see the relationships that are there. The feeling is that everyone is there to make the product strong, and if (someone’s presence) helps, than that’s only good for everyone. It’s a good feeling to have.”

That same attitude — if it’s good for the company, it’s good for everybody — holds true for Cage when asked about some of the more recent entrants in TNA, veterans like Scott Steiner and Sting, who Cage says has been a great asset to the company.

“Sting’s been a great guy. He wanted to come in and do the best he can to help the company and help the show. He wants to help some of the young guys who have the potential to be the next big names in the business, and take them to the next level and become big superstars. Working with a guy like Sting will help legitimize those guys, definitely.”

Using veterans in that capacity is part of an overall strategy to help TNA grow even bigger than it has been. It’s a longer-term plan that Cage says has the potential for great success if they continue doing things the way they have been.

“Ultimately, going head-to-head (with WWE) would be good for the business. But, that’s not something you can just do overnight. It’s something you have to build to and work towards, in order to have a strong enough product to be able to compete. We’re trying to get to that level, and we’re trying to get that good solid fan base, which we’re starting to really get, and things are looking up.”

To ensure that he can continue to be one of the key players in that objective, Cage has decided to focus his energies primarily towards TNA, as opposed to working a lot of independent shows. That decision has helped him recover from a grueling schedule in WWE, where the mental and physical strains from life on the road were in danger of burning him out.

“Part of the reason I left WWE was because of the schedule. I was on the road for eight years straight, 250-plus days a year. It gets to the point where it’s crazy; your body’s tired and you’re mentally tired. The great thing about TNA is that the schedule is not as demanding, so I’ve had a chance to heal my body.”

“But I will do some very select indy dates, just not every weekend or anything like that. Of course, I’d like to do some dates in Canada again — I really like wrestling for Canadian fans. I’ve always said that they’re the best wrestling fans in the world. It’s always great to come home to perform for them.”