Ballpark Brawl DVD worth the wait

The amount of ‘Carnage’ on the DVD Ballpark Brawl III: Canadian Carnage may be subjective but there is no doubting the Canadian content on this DVD. 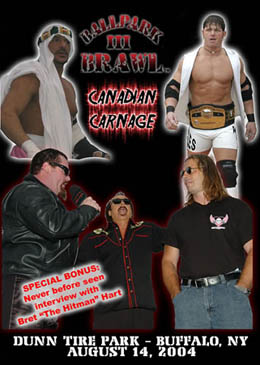 This event was held on August 14, 2004 at Buffalo, New York’s Dunn Tire Park and combined pro wrestling action with the Buffalo Bisons Triple A baseball under one banner. It has taken the promoters over a year to bring this event to DVD but in my eyes it’s been well worth the wait. (And they promise 2005’s version is about to be released.)

With so many indy promotions rushing to get DVDs produced so they can quickly sell them at the next show, it’s nice to see that some thought and time went into this release. The DVD is best watched in its entirety rather than skipping to certain matches right away. Each match starts with Pro Wrestling Illustrated‘s Dan Murphy giving the viewer some history and information about the upcoming match. Most of the matches also include pre-match interviews with the competitors themselves. It’s refreshing to see that storytelling is just as important as the matches themselves on this DVD. Commentary is provided by Scotty Bender and Ivan The Impaler throughout the show.

The event featured a tournament to crown the “Natural Heavyweight Champion.” I was a little disappointed to see that not all matches from the tournament were included on the disc.

The DVD does not end there as they have included a host of extras as well. Included is a Bret Hart interview where Bret discusses topics such as his stroke, his legacy, Vince McMahon, Shawn Michaels and more; A few unscripted in-ring Teddy Hart promos; a post-match Cody Steele interview; and some pre-game footage of which you can watch Ivan The Impaler dancing for your amusement.

Fans of current Toronto indy promotion Blood, Sweat and Ears will perhaps recognize a chubbier BSE ring announcer, Dave Blezard taking on Jimmy Hart in a DJ challenge as another bonus on the disc.

I highly recommend this disc. It is very well produced and the camera work is excellent with even live replays during the matches. My only complaint is that there is one camera angle that is a tad blurry. No matter what type of wrestling fan you are there is something on this DVD for everyone. And reason to hope they’ll get their acts together and release the 2005 version soon.

Emanuel Melo is a photographer and owner/founder of www.ontarioindywrestling.com, as well as the co-host of the Internet wrestling radio show Ontario Wrestling Recap. He can be emailed at [email protected].