As I sit in the SLAM! office, I look at what may have been the single biggest year of change in pro wrestling history.

This year, the landscapes for the two top North American leagues — WWE and TNA — were altered in numerous ways, some good, some bad.

There was activity all across the television landscape, there were numerous wrestler moves and there were more peaks into an actual shift in the talent balance of both feds.

With the help of some of the SLAM! Wrestling staff, I’ve narrowed down the list of stories of the year to a top 10 list, as clichéd as it is.

But what didn’t make the list, you ask? Close but no cigars for: The Edge/Lita/Matt Hardy love triangle; the launch of The Fight Network in Canada; WWE 24/7 arriving in Canada; and the plethora of good wrestling books.

10> Jericho … gonzo?
When Chris Jericho entered into a “Loser Leaves Raw” match following his loss to John Cena at SummerSlam, everyone assumed he’d be jumping to Smackdown shortly thereafter. Instead, it may very well have signaled Y2J’s departure from WWE.

Jericho, ever the one to work the ‘Net, posted a TNA image on his website shortly after the bout, but that has pretty much been the last wrestling reference the Fozzy-frontman given his Jerichoholics.

What Lies Ahead:
His continued push with Fozzy and their rapid popularity growth, as well as his pursuit of an acting career, could spell the end of Jericho’s in-ring career. The coming year will go a long way in giving fans an idea if we’ll ever … ever see Jericho in the ring again.

9> Coming home to hardcore
Usually a reunion involves laughing and punchbowls. In this case, however, it was screams and thumbtacks.

This past year, Extreme Championship Wrestling reappeared on the wrestling landscape in the form of WWE’s One Night Stand pay-per-view and the Hardcore Homecoming tour, organized by Shane Douglas. Both were run successfully and drew fans back to the days of true hardcore wrestling.

What Lies Ahead:
With Rob Van Dam returning to action in early 2006 and TNA’s continued use of Raven and Sabu in hardcore environments, extreme wrestling is here to stay.

8> TNA! TNA!
Total Nonstop Action went into 2005 with much speculation of the viability of the fledgling company.

There was great concern that the company wasn’t making enough money to stay afloat and there was worry that the Fox Sportsnet deal would not be renewed. In the end, the partnership was done after one year, but TNA has moved forward with a better agreement with Spike TV, and there now seems to be hope for the high-flying company.

What Lies Ahead:
There is much talk now that TNA could be headed on the road this year for a tour of the States (and Canada), and that will go along way in solidifying the company as a legitimate contender to WWE.

7> Home again
After a few years away from the network that helped launch Raw, WWE returned to the USA Network.

The move was expected to be a payoff for the company in higher ratings, though the Fed sacrificed its lucrative advertising dollars as a result of its transition to the popular cable channel. Also part of the deal was the return of Saturday Night’s Main Event to NBC.

What Lies Ahead:
The loss of ad revenue could hurt the Fed in a financial stance, but the NBC portion of the agreement could go far in reaching out to new audience possibilities. A give and take, but don’t be surprised if a tumultuous year lies ahead.

6> Brock’s back … no, wait, he isn’t
Cynical wrestling fans assumed that wwe.com was working the Fed’s audience when it covered Brock Lesnar’s meetings with Vince McMahon. Boy were they wrong.

In a rare move of legitimate coverage (to that point), WWE’s website reported every detail of Lesnar’s potential return to WWE, including word that the two parties could not reach an agreement. Following Brockgate, wrestling writers have started to take wwe.com’s reports more seriously.

Meanwhile, Lesnar has moved to New Japan Pro Wrestling and doesn’t look to be returning to North American soil for some time, while WWE attempts to block his work with the supposed “competing” company.

What Lies Ahead:
Lesnar doesn’t look to be leaving Japan anytime soon, and could easily become as successful in the far east as Stan Hansen and other North American travelers. WWE’s requested court injunction has been dismissed, but expect them to not let this one go anytime soon.

6> Sold!
It’s rare for any wrestling business to change hands, but that’s what happened in 2005.

New Japan Pro Wrestling owner Antonio Inoki sold controlling stake in the popular puro company to Yukes this past November. If the name sounds familiar to you, it’s because, among other projects, Yukes is on the development team for WWE’s video game titles with THQ.

Since the ownership change, Lesnar has come into the company, which is constantly being barraged by WWE for injunctions top stop the “Next Big Thing” from wrestling for the company.

What Lies Ahead:
Rightly or wrongly, the Lesnar saga will be dominating North American headlines. If rumours are to be believed, NJPW could be coming to North American PPV soon. Should that happen, however, expect WWE to go even harder against the company over Lesnar. Talent exchanges with the likes of TNA and RoH are also possible.

4> Bret’s Back
After years of talk, Bret “Hitman” Hart made his return to WWE … sort of.

Eight years after the “Montreal Screwjob”, Hart and WWE finally got back on the same page and put out what is arguably the best DVD of 2005. Hart, however, has stood firm by his stance that he won’t come back to WWE television, with his only appearance for the Fed being a Byte This! broadband-cast.

What Lies Ahead:
While a Hitman appearance on television still seems as likely as Vince McMahon leaving the Fed, he could be headed for the WWE Hall of Fame. This likely won’t happen in ’06, however, and with Hart’s involvement in theatre and other projects, we might not even hear much about Bret in the wrestling world — aside from rumour boards and his July induction into the George Tragos/Lou Thesz Professional Wrestling Hall of Fame.

3> Cage rolls to TNA
For the first time in a long time, a major wrestling name jumped companies this year.

Christian (Cage) left WWE around the time of the Taboo Tuesday PPV for TNA and has blossomed in the six-sided ring. Always considered a main-eventer-in-wait (by the fans, at least), Christian’s popularity has never been stronger. Choosing not to renew his WWE contract, Christian has now reached the main event level his fans have been hoping for.

What Lies Ahead:
The NWA Championship is definitely within “Captain Charisma’s” sights, and putting him at the top could do big things for TNA. The burning question remains to be whether or not other WWE stars will follow Christian south to Orlando. We should get our answer soon.

2> Fed cuts
Layoffs in Titan Towers are nothing new, but this year was one of the most noteworthy layoff periods in WWE’s history.

What Lies Ahead:
With ad revenue out of the picture, WWE will likely be tightening its purse strings even more this year. 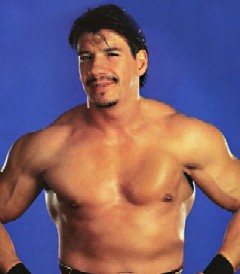 Eddie Guerrero: His death was top story of 2005

Latino Heat passed away suddenly in November, leaving behind years of anguish after finally pinning his demons. One of the most loved wrestlers in WWE was reportedly set to gain the World Title the night after his passing, and the outpouring of support showed that he was already a “people’s champion”.

Following his death, WWE celebrated his life with two memorial shows (one on Raw, one on Smackdown). WWE also announced a new drug policy, one that many associated to the problems Guerrero battled in the past.

Unfortunately, as 2005 closes, the major topic on the minds of many fans is how part of Guerrero’s legacy has been handled by the Fed. Numerous fans were turned off by WWE using a lowrider as a prop during a special Smackdown broadcast a few weeks ago.

What Lies Ahead:
While WWE’s drug policy has yet to be clarified or really put into action, Latino Heat fans are now able to read Guerrero’s autobiography. It could very well rival Mick Foley’s books for the best-selling WWE publications. As for the drug policy, it could be the talk of 2006.

– with files from Corey David Lacroix.