NEW YORK — Amidst the suave atmosphere of Caroline’s Comedy Club, located in the heart of the Big Apple, fans from across the globe traveled to catch a glimpse and get an autograph from the man they call “The Hitman.”

On the morning of November 5, Caroline’s was taken over by Ringside Fest 2005. An hour before the doors even opened, a line of fans could be seen stretched out down the block and around the corner, drawing a great deal of attention to an event that spoke for itself. 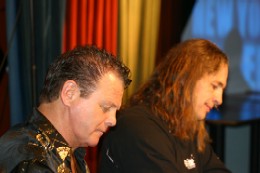 Upon entering the building and descending the staircase, you were greeted by Ringside Collectibles, one of the top online dealers when it comes to wrestling figures. They were selling the much talked about Ringside Fest Yokozuna, produced in an exclusive run of 1,800 figures. The figure came completely packaged and decked out in a traditional Japanese robe and classic Red and White tights, along with a Japanese flag.

At about 9:00 a.m., Bret Hart and Jerry “The King” Lawler sat down to sign autographs for a line that was three hours long. It was quite evident that Hart was the main draw behind this show, with fans idolizing him throughout the day. Hart seemed relaxed and appreciative of the attention. Lawler was especially excited, as Saturday was the release of his very own Classic Superstars figure, crown included.

From there, fans made their way to their seats for the Bret Hart Q & A session, that was filled with with many memorable stories and quotes. Hart showed no love for Shawn Michaels, calling him a “So-called Christian.” Hart also recalled the time he gave Michaels a tour of the lockeroom by his hair. On a lighter note, Hart preferred that if he were to come back to the tag team division, he would rather team with Matt Hardy than Hardcore Holly. Every answer triggered a fan response.

Non-VIP ticket holders were sent out of the room while the staff prepared for the Jerry Lawler/Jakks Pacific Q & A Session, that would also be hosted by Tim Ash. As was to be expected, Lawler fielded most of the questions in this one, and even made reference to Joey Styles, which received quite the reaction in its own right. Apparently WWE will be following through with the Extreme commentator. Jakks was there to let fans know that if they had any suggestions for new figures, to visit their website and send them in; if there was a big enough response, they would make them.

The last autograph session of the day featured two current WWE stars, Kurt Angle and Carlito. While the line wasn’t as long as Hart and Lawler’s, there were still a great deal of people waiting. Everything ran smooth and simple, making it an enjoyable experience for all parties.

So, maybe now New York City has finally filled its Bret Hart craving? If not, Bret had some advice: “Save up your money and buy my book.”