CLOVERDALE, BC — The last time Don Leo Jonathan was in the Alice McKay building in Cloverdale, it was for a very different reason. That would have been several decades ago and back then he was known as the Mormon Giant, a massive 320-pound wrestler who was known for his incredible size and strength. One loyal fan remembered Jonathan tossing two men over the top rope “like they were nothing to him.”

But Don Leo Jonathan’s return to Cloverdale this past weekend was a little more difficult for him. At 75 years of age, most things are like that. Jonathan now walks with a cane, his back slightly hunched over — he’s no longer the hulking grappler he was once was, but to the fans assembled for the Top Ranked Wrestling show on November 5, 2005, that didn’t matter — the legend was back. 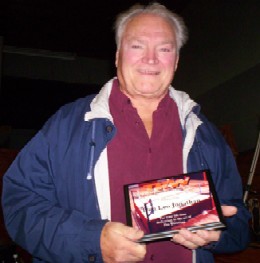 Don Leo Jonathan with his plaque. Photos by Fred Johns

In the second of what is to be several tributes to the legends of the past, TRW invited Don Leo to a television taping so they could honour him with a plaque and give him the opportunity — if only for a few moments — to step back inside a wrestling ring. A few months back, they did the same with “Mighty” John Quinn, another legend who the fans appreciated seeing again.

For Jonathan the return, as he put it, was “bittersweet. The last time I was here I could run along the top ropes and do handsprings over them. Now, I have to look at that ring and figure out how I am gonna attack those steps.” He smiled. “It’d be much better if I had my boots and a pair of tights.”

He figures it’s been about 25 years since he wrestled in what is now known as the Alice McKay building. There have been some changes: there didn’t used to be any bleachers, just ringside seats and chairs. But the one thing that has remained the same, he noticed, were the people that still knew him. “I still have a lot of old fans,” he said on the night of the tribute, moments after a pleasant handshake with a several excited people in the audience. “I’ve had a dozen or so people come over to me who remembered seeing me wrestle in this place.” 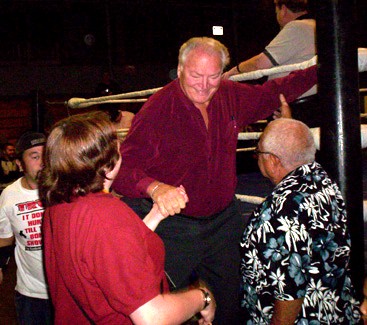 Don Leo is helped from the ring.

One of them was a 79-year old man named Nick who has nothing but fond memories of the man known as the Mormon Giant. “I watched him for years,” Nick said, his old eyes lost in a memory. “I’d say it’s been about 30 years. Of course, back then it was a different kind of wrestling. The days he wrestled, I called it ‘wrestling’, unlike what we have today.”

When Nick learned of the TRW tribute to Don Leo, he knew he had to come. “I just like the man,” he said. “I watched him all the time and enjoyed it. I think this tribute is great. It’s too bad he’s a little bent over, but it’s great to see him and he looks great for being 75 years old. Of course, most of the young kids here don’t know who he is, since he’s been out of wrestling for quite a few years now.” Nick looked up and winked. “That’s okay though, that’ll be our little secret.”

For his part, Jonathan was flattered to be invited by TRW and was only to happy to accept the invitation. “You get a certain distance away and you have to go out of your way to get back to it,” he said. Another reason he came was that he thought he could be of use to the younger guys in the TRW locker room. “I think [this tribute] should be somewhat of an inspiration to the younger fellows, because they need to have an inspiration. Some of these kids are going to make it and some aren’t. I can talk to some of the young fellows and let them know they are not the first guy that’s gone through this and the ones that stick are the ones that will stay.”

His own experiences, he said, could be a helpful learning tool for these up-and-comers. “There are those that will wonder and think it’s not worth the pain or the time. I know as a young fellow myself I thought that and that maybe I should have gone back to something I knew better, but wrestling is something I wanted to do and I just gave it more time and more energy than a lot of other people. Through that training and that drive, I could do things at 320 pounds that 200-pounders couldn’t do.”

Those days are gone, and the world of wrestling has undergone a complete transformation in the time between. But Don Leo hopes some of the younger wrestlers can hold onto some of the past, even if it is just a little piece. “I would like to see some of the kids here that know the holds, know how to wrestle and love it just for the sport of doing it because you have to love something to do it well.” 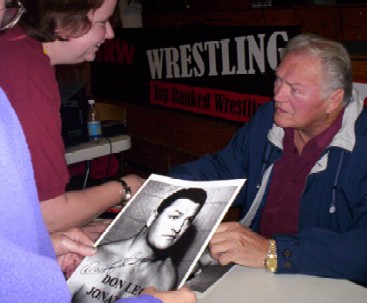 Just like he does. “I was in love with wrestling all my life and I still love it and I still find myself watching matches or the kids wrestling. I know that the life I lead now is so completely different, but in your mind, the time hasn’t gone like that. You lose your balance but you still feel in yourself that you can do it and then you realize you can’t but still wish you could.”

TRW has billed itself as the place “where the legends are honoured and the past counts.” And when it was finally time for Don Leo Jonathan to step through the ring ropes one more time, the fans — and the wrestlers — honoured him with a rousing round of applause. TRW Commissioner Mike Democrat handed him a plaque recognizing his wrestling achievements and then Jonathan took the microphone to make a short statement: “I still have a lot of friends that have come here to see me, so thank you all very much.”

When the applause finally died down, Don Leo gingerly made his way over to the autograph table where the young and the old clamored for an autographed picture of him. Many people not only shook his hand but spoke with the wrestling legend for quite a few moments, relating stories, reliving memories and enjoying their brief time with a great man. For those few minutes during the intermission of a televised wrestling show, Don Leo Jonathan seemed, again, larger-than-life, in a place he knew well.

When it was all over and the fans were filing out of the building, Don Leo Jonathan was nowhere to be seen, yet somehow his presence remained. It could be seen on the faces of the fans leaving the building and in the spirit of the wrestlers as they helped disassemble the ring. When — and if — he would ever be seen again was unknown, but everyone was glad he had at least made this one appearance in a building he had last been in a quarter of a century ago.

The fans and wrestlers were honoured to be sure, but Jonathan sees it the other way around. “I was told at a young age that if you want to dance, you have to pay the fiddler,” Don Leo had said moments before his tribute. “When he comes to collect depends on luck.” And then, looking around at the fans in the building he said, “I’m one of the lucky ones.”