For Canada’s Sarah Stock, the wrestling business only continues to open more doors to success.

She has achieved a prosperous career in the industry where swimsuit models with no previous wrestling experience are given lucrative contracts, whether or not they know the difference between a hip toss and an arm drag.

“Believe me, I know how fortunate I am,” said Stock in an interview with SLAM! Wrestling. “It was always a goal for me to be able to wrestle as much as I am and not have to go to another job. Sometimes I wake up and just take a deep breath and revel in the fact that I’m doing what I love.”

What Stock is doing is wrestling full-time and making a living at it in Mexico. If that wasn’t something to celebrate about, she will be going after what may soon be the most prestigious women’s title in that country. 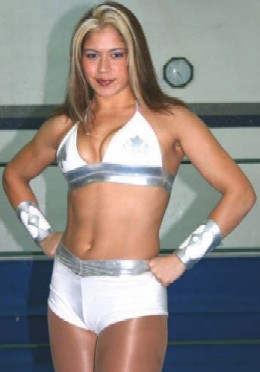 On September 9, Stock will participate in an all-women’s tournament to determine the new Consejo Mundial de Lucha Libre (CMLL) women’s champion. The two remaining competitors from each pool will then meet the following Friday at the 72nd anniversary Arena Mexico show. CMLL is one of the two premiere wrestling promotions in Mexico.

“In terms of being involved in the tournament, I feel honored,” said Stock. “It was my goal for several months to wrestle with CMLL, even at a time when they were not holding women’s matches. The women’s division has grown so much in just a couple short months and I feel very fulfilled and satisfied to be involved in this phenomenal company that is giving women’s wrestling such a big push.”

It was several years ago that CMLL had suddenly announced that the company was disbanding their women’s division. Rivals Asistencia, Asesoría y Administración (AAA) continued to promote female wrestlers (known as luchadoras), but interest from the promotion in maintaining a strong division has waned. CMLL has already held several wrestling shows featuring women matches.

Stock isn’t sure why CMLL decided to re-establish a women’s division. “Maybe it had to do with the amount of talented independent wrestlers that were looking for a place to work. I think once they saw how great the reception was, they (CMLL) continued to run matches. A strong women’s division is something that AAA currently lacks — although they definitely have strong women wrestlers like Cynthia Moreno, Martha Villalobos, Faby Apache and Diabolica.”

With her decision made to join the CMLL women’s division, Stock confirmed that she will no longer be accepting bookings with AAA. “The truth is that I never was working for AAA, I had always been independent, and continue to be. I only had a couple of dates with AAA. But now that I am committed to CMLL, I will not be accepting any more dates from AAA for the time being.”

The road to CMLL for Stock began back in December of 2004, when she decided to part ways with Monterrey-based Lucha Libre Femenil (LLF).

“I really had no problems with LLF, I simply wanted more freedom,” Stock explained. “I agreed to exclusivity with LLF for six weeks in December, which is something I had never done before. By the end of it, I realized that although LLF had helped me out a great deal, I needed to be free to move around and explore more of Mexico in order to better my career.”

She would set to work for a variety of promotions outside of her home base of Monterrey. In particular, Stock began networking in Mexico City for wrestling opportunities that would help further her career.

“I started making trips back and forth to Mexico City from Monterrey to talk with different offices and see what kind of offers were available. At that time, CMLL didn’t have any women on their shows, but I knew that it was a great company and that I would one day like to be a part of it. Even though there were no women, I continued to make occasional trips to Mexico City to train at the CMLL gym in Arena Mexico and little by little I started to get to know people.”

The long treks from Monterrey eventually paid off. Stock would make her wrestling debut at the famed Arena Mexico on July 1, which also happens to be Canada Day — appropriate considering how often Stock proudly sports the Canadian maple leaf on her wrestling outfits.

“Wow, I was blown away,” Stock reminisced on her first wrestling appearance in the historic building. “The first match I had there was one of the highlights of my life. I was all nerves until I stepped out from behind the curtain and saw all the people and heard their support. Then I was just having the time of my life.”

The connection with CMLL has struck the right balance for the independent-minded Stock, as she is still free to acquire bookings outside of the company.

“I have the best of both worlds because CMLL gives me work in and around Mexico City and in their major plazas, but outside of that I am free to accept bookings wherever.”

While her fortunes in the lucha libre scene have changed dramatically since SLAM! Wrestling last saw the Winnipeg native in action, so to have her in-ring abilities. “I have definitely changed as a wrestler thanks to the level of my opponents and to the constant training. Everything feels a lot crisper and more effective. I feel that what I lack in experience I make up for in endurance and willingness to learn. I have become more acrobatic and I am doing things that would have scared the pants off me a year ago. My style is a little quicker now, and training in Olympic wrestling has made me a better wrestler on the mat.”

What certainly does not hinder Stock’s growing appeal is her all-natural good looks, something that she is unapologetic in utilizing when it comes to earning new fans. “If somebody wants to book me for the way I look, I have no problem with that,” Stock said. “I don’t spend so much time in the gym for nothing. I know it’s something I can use to my advantage. The important thing is for people to see me, and then they can decide for themselves whether they like my wrestling style.”

While success in Mexico can only breed envy from her counterparts in the rest of North America, the downfall to Stock’s rising fortunes is that Canadian fans will be denied the privilege of seeing her live in action for the immediate future.

“I really have no plans to return to Canada at the moment,” confirmed Stock, although she will be coming back in December for a visit with her family at Christmas. “I would really like to get back in the ring in Canada, but the truth is that there is an abundance of work in Mexico, and there is simply not the same amount in Canada.”