Miguel Perez Sr., one-half of one of the most successful tag teams of all time, died Saturday at the age of 68. Perez suffered a heart attack while taking a morning shower at his home in Puerto Rico.

Perez teamed with Argentina Rocca during the late 1950s to headline cards up and down the East Coast for Capitol Sports, the forerunner of the WWE. The duo lost only one recorded tag team match in a period that spanned about 20 years. 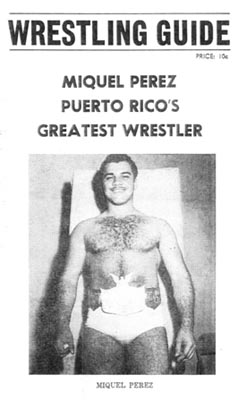 Miguel Perez was featured on the cover of this 1958 program from St. Nicholas Arena in New York City.

The pair first hit the mat together in early 1957. The high-flying Rocca was slowing down, and promoters saw an opportunity to pair him with a good-looking, young Latino wrestler.

The IWA-Puerto Rico Web site acknowledged his passing, saying, “Today we lost the best fighter of Puerto Rico, but the sky gained an angel.”

Perez, whose first name was Jose, actually started in the New York area as a heel. Wrestling historian Fred Hornby recalled that he was elevated to main event status because he appeared to be the best of the available ethnic wrestlers at the time.

“Everybody pictures him with the white trunks and the white books — when he broke in, he was a heel. It wasn’t for long. It was only for a few weeks. He was in black trunks and black boots,” Hornby recalled. Perez and Rocca “hitched up and the rest is history.”

His primary duty as part of the team was to take a beating before tagging Rocca for a fiery comeback. “Perez, not a polished wrestler or showman, is usually pummeled by the villains to the point where his pompadour is dismantled. Then Rocca, seeking revenge for the abuse to Perez’ hair tonic, springs into action,” writer Gay Talese reported in The New York Times.

As a combo, Rocca and Perez were box office magic to the Latino community. They headlined 28 of 34 cards at Madison Square Garden from 1957 to 1960, and were undefeated all the time. They faced The Fargo Brothers, The Fabulous Kangaroos, and The Tolos Brothers and the Golden Grahams, among other teams, and easily drew larger crowds on a regular basis than any team in the history of the federation.

Their only reported loss came after they re-teamed in Puerto Rico as WWC North American champions in 1976. They lost to Gordon Nelson and Higo Hamaguchi that October. Rocca died the following year.

Perez continued as an undercard worker in the then-WWWF through most of the 1960s. He teamed with Victor Rivera for several months in 1968, his last in the WWWF. He also appeared in the Buffalo area at that time. He spent most of the rest of his career in Puerto Rico and held the WWC Puerto Rican championship four times from 1974 to 1977 against Tosh Togo, Hurrican Castillo and others.

His son, Miguel Perez Jr., wrestled for the WWF as one of Los Boricuas in the 1990s and is active in the IWA promotion in Puerto Rico.